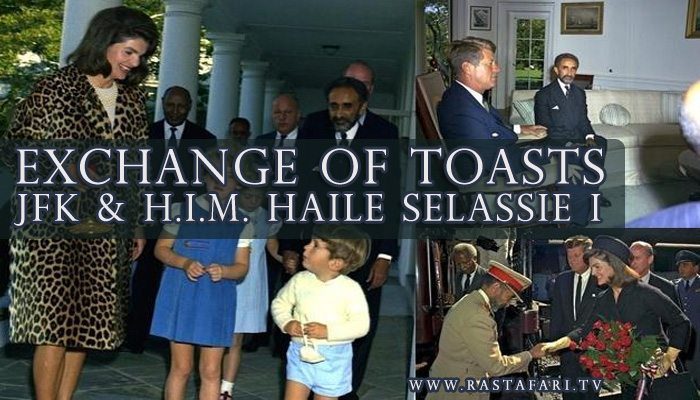 As you say, Ethiopia and the United States are separated not only by geography but by history and culture, but I think that they are bound together by necessity, and that is the necessity for all sovereign free countries to maintain the most intimate association.

So we are very proud to have you here because of what your country has done, what it is doing, because of the hospitality you have shown to my fellow countrymen when they have gone there to work or to visit.

Most of all, we are glad to have you here because of your own extraordinary record. Those of us who have held office for a comparatively brief time are somewhat awed to realize that you have borne the responsibility of leadership in your country for more than 45 years. For a good part of this century, with all the changes that it has brought to not only your own country but to the continent of Africa, and so much of the West during this whole period, the central thrust of burden has been borne by you. And to have borne it with such distinction in other days and to still bear it with such force-demonstrated by the fact that your capital was chosen by your fellow leaders of Africa to be the center of this great, cooperative movement which was symbolized by the summit meeting in your capital and which was made a success by your own very patient efforts–brings accord out of what could have been on occasion perhaps a disagreement.

So, looking to a long past, looking to a promising future, we want to say, Your Majesty, that we are proud to have you here, we have been honored by the visit, and I hope that this short time here in Washington will remind you once again of how strongly your place is secured in the affection of all of the people of the United States. I hope all of you will join with me in a toast to His Imperial Majesty.

Note: The President spoke at the Woodmont Country Club in Rockville, Md. at a luncheon given in his honor by Emperor Haile Selassie. In his opening remarks the President referred to Princess Ruth Desta, the Emperor’s granddaughter.  The Emperor, speaking before him, began by mentioning the warm and friendly relationship between his nation and the United States. He referred to the growing number of Americans who go to Ethiopia–as members of economic and military aid missions, in the Peace Corps, as businessmen, and as tourists. Such associations, the Emperor continued, cannot but help the Ethiopian and American peoples to know each other better. Mutual understanding has also been broadened, he pointed out, by the many young Ethiopian leaders who have studied in the United States. “If their number now declines,” he added, “it will be because of the new university which has, with the generous help of the people and the Government of the United States, now assumed the responsibility for providing higher education in Ethiopia.”

The Charter of Unity recently signed in his capital by African heads of state demonstrates, said Emperor Haile Selassie, the will of their peoples, inspired by America’s example past and present, to prepare for themselves a future of unity and brotherhood.

He concluded with a toast to the President and to the two peoples, who are, he said, distant in geography but proximate in friendship and in spirit.

Exchange of toasts between BOTH Emperor Haile Selassie I and President Kennedy, 2 October 1963

2 October 1963
2 digital pages
This site contains a press copy of BOTH exchange of toasts between President John F. Kennedy and Haile Selassie I, Emperor of Ethiopia, during a luncheon held at the Woodmont County Club in Rockville, Maryland. In his remarks President Kennedy discusses the Emperor’s leadership in Ethiopia and international organizations such as the United Nations. Emperor Haile Selassie discusses his hopes that increased cultural exchange between peoples of different nations will increase tolerance and understanding. The Emperor also compares current African efforts for unification to the American Civil Rights Movement.