Lying 100km north of Addis Ababa is one of Ethiopia’s holiest sites. Debre Libanos monastery was founded in the 13th century by Tekla Haimanot, a priest credited not only with the spread of Christianity in the highlands, but also the restoration of the Solomonic line of kings. Today he’s one of Ethiopia’s most revered saints. Since his time, Debre Libanos has served as the principal monastery of the old Shoa region, and remains one of Ethiopia’s largest and most important. Many Ethiopians make pilgrimages and some seek out its curative holy waters, said to be good for warding off evil spirits and for stomach disorders.

Although no trace of the ancient monastery remains (a casualty of the Muslim–Christian Wars), the site is impressively set beneath a waterfall-rich cliff (many of the monks live in caves up there) on the edge of the large Jemma River Gorge and is a peaceful place to wander. 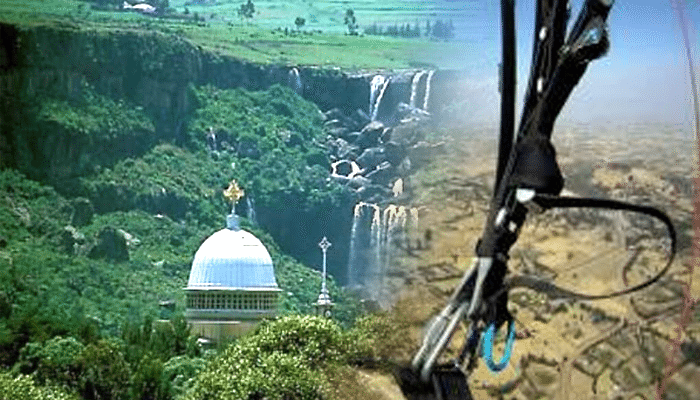 The present church was built in 1961 by Haile Selassie, against the wishes of the local priests, after hearing a prophesy that a new church would ensure a long reign. It’s monumental and pretty awful on the outside, but the stained-glass windows are attractive.

It’s got one of the most interesting church museums in Ethiopia. Besides the usual ecclesiastical items there are Italian guns, giant cooking pots, crowns of past emperors and their wives, musical instruments and an old wooden shackle. Fifteen minutes up the hill from the monastery is Tekla Haimanot’s cave, where the saint is said to have done all his praying. It’s also the source of the holy water. A monument in front of the church memorialises the hundreds of innocent priests, deacons, and worshipers who were massacred here by the Italians following an assassination attempt on the notoriously brutal viceroy Graziani in 1937 (he was later imprisoned by the Italians as a war criminal for crimes against humanity).

Though the local guides insist this small stone-arch Portuguese bridge was erected by the Portuguese in the 16th century, it was actually built at the turn of the 19th century by Ethiopians: though in the old Portuguese style. The narrow span makes a pretty picture and the gushing (in the rainy season) cascade just below it is even more impressive. The 300m access trail running along the edge of the Jemma River Gorge starts at the Ethio-German Park Hotel.

I am very pleased to send you words of my best wishes for your happiness, progress and peace, on this blessed day for mankind, ...
Theme developed by TouchSize - Premium WordPress Themes and Websites