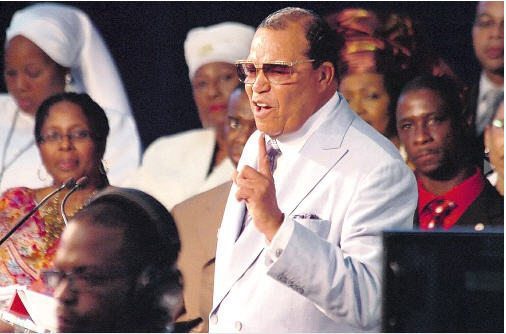 NATION of Islam Leader Louis Farrakhan yesterday criticised Jamaican governments over the years for not adequately building on efforts made by the country’s late national heroes to create an independent Jamaica.

Addressing hundreds of Jamaicans and other Caribbean nationals gathered at the National Arena to celebrate the 19th anniversary of the Million Man March (MMM) yesterday, the eve of National Heroes’ Day, Farrakhan said revamping the current education system was the place to start.

“If you want to be free, the first thing you have to think about is what kind of education should we possess that will allow us to continue the journey that Norman Manley, Bustamante and Michael Manley put us on,” said Farrakhan, noting that steps in recent time to introduce in schools the teachings of the country’s first national hero, Marcus Garvey, was a commendable first step.

He also suggested breaking allegiance to the queen of England, which he described as a necessary part of evolutionary growth and development, and a necessity if Caribbean countries are to become a regional power “with a voice that [will] affect the world”.

“Breaking away from our colonial slave masters is what we started with in our Independence movement, but we never took it as far as it should be taken,” said Farrakhan.

In a wide-ranging message, which also highlighted the language barriers among Caribbean peoples, the socio-economic consequences of borrowing from the International Monetary Fund, slavery and reparation, and the importance of practical agriculture to the region’s sustainability, the Nation of Islam Leader added that the cultural community had a role to play in leading the way towards liberation.

The MMM, a mass gathering of African-Americans and other ethnic groups, was staged in Washington, DC in 1995 to win politicians’ attention for urban and minority issues. Yesterday was the first time its anniversary was celebrated in the Caribbean and hundreds of people filled the National Arena to listen to Farrakhan.

“Right now we need more of these visits in Jamaica,” said Clarence Nugent.

Leo Walker, another Jamaican who gave intent ear during the meeting, said Farrakhan’s message had left him with a different outlook on life.

“I really liked the message; it was really an inspiration,” said Walker.