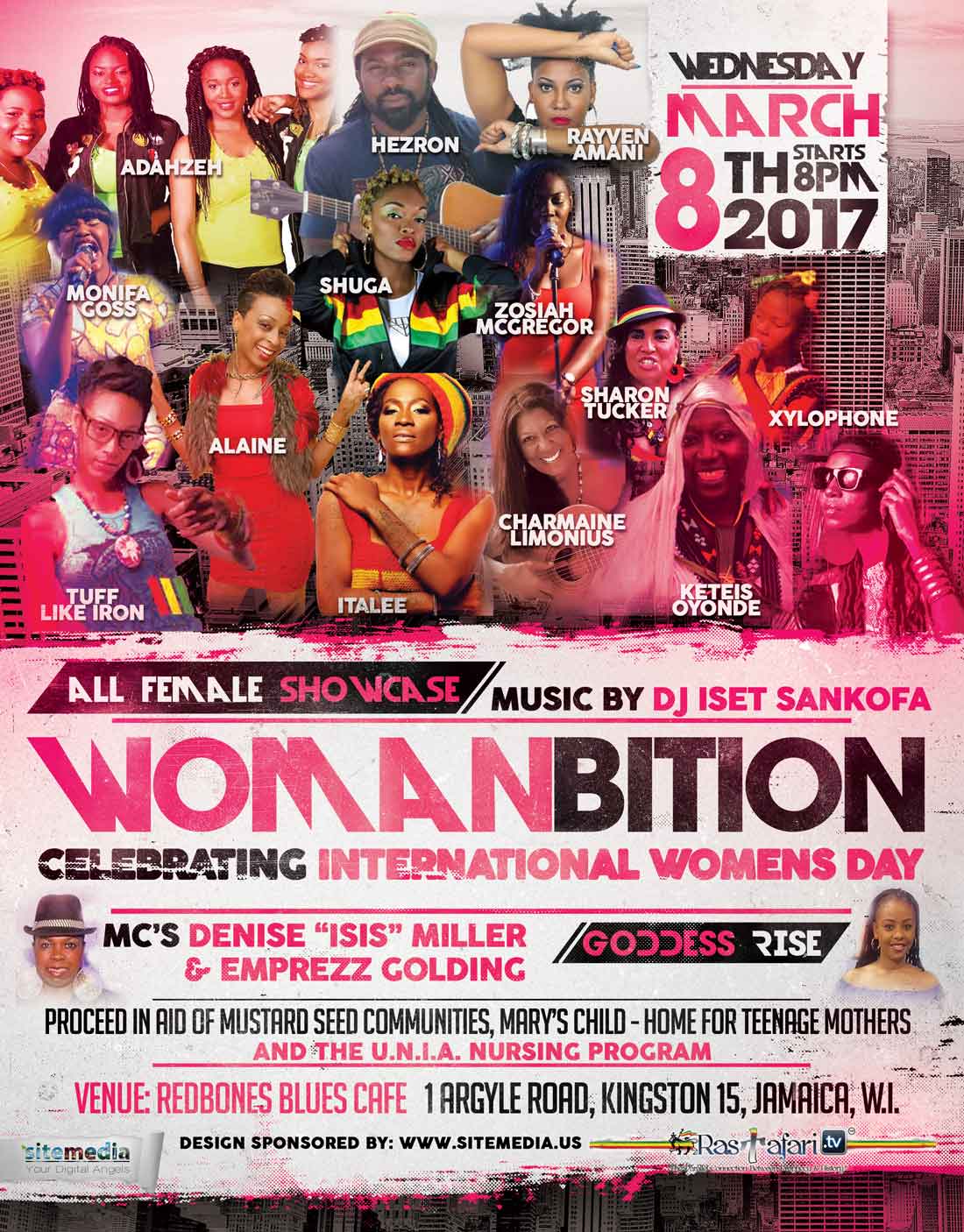 International Women’s Day at Red Bones on Wednesday, March 8 was well spent.The rustic setting provided an artistic aura that set the pace for the talents that unfolded in the name of charity.

Denise Isis Miller started on time at exactly 8pm with “Claim The Victory Affirmation”, reminding all present that “health, wealth and prosperity are our natural birthright”. Young Xylophone followed with a soul-touching set that gave her a well-deserved applause. Charming Charmaine Limonious delivered dutifully while playing her guitar, which saw her receiving a money pull up encore. She was serene!
Zosiah McGregor (daughter of Freddie McGregor) also proved her melodic skills showing that talent does run in the “big ship” family.

As Womanbition 2017 drew gear, the all-female band Adahzeh played and performed confidently to secure their place in history as musicians of class.

Patrons were obviously being entertained as they rolled into the venue that was filled to capacity. Selections by DJ Iset Sankofa offered a relief to the ear as she featured songs and sounds that hit the spot.

And to add to the growing positive vibrations, the Curvy Divas Dance added a spicy flavour to the running order. They showed boldly the power of being comfortable with their size and versatility.

This paved the way for the next segment of the event which saw performances from Digicel Rising Stars’ 2nd place winner Monifa Goss. Her powerful voice and delivery was well received.

Tuff Like Iron from the Jah Over Evil family rocked the crowd soothingly as she was on point with “tune in to the frequencies”. Chanting “Stepping though di fire” Keteis Oyonde alighted the stage in a militant vibe. But that was to be outdone by her deeper rendition of “You keep me strong”. She was in control.

Italee was next, with the Circle of Brothers to her ‘backative’. She danced and pranced, preached and taught the attentive audience about the value of women through her music and in a dramatic fashion. Her engaging set was memorable.

Rayven Amani backed by the Mission Driven Band offered more refreshing music which saw her reaffirming the importance of being loyal in songs such as “black without apology” and “my darling”.

The female artistes were on a high and went even higher as Alaine took centre stage at Redbones. Her excellent vocal and performing skills had the audience off their feet. “Heart of a champion”, “You are me” and “Rise” brought tears and joy at the same time. But that was just the main course as Shuga continued to raise the musical bar with “Give my soul to Jah” and “Ebony”.
As part of the showcase, the annual Womanbition/WISH award was later presented to Ka’bu Ma’at Kheru (aka Andrea Williams-Green) Programs Manager at Irie Fm; collected on her behalf by Capleton’s Manager Claudette Kemp. This was given for her contribution to cultural development, Women’s issues and nation building.

In addition, the appeal to donate to the cause of Mary’s Child and the UNIA Nursing Program was reiterated by hostesses Emprezz and Isis. A huge basket of ‘baby goodies’ among other packages were also donated by Mrs. Kemp and Alicia Jarrett who was also the Messenjah and founder of Curvy Caribbean Conference.

As the showcase came to a close, Hezron, the only male performer added a “tasty dessert” to Womanbition 2017. “Forever and Always” and “Superwoman” were only a few of the hits Hezron used to inspire the faithful crowd that stayed to the culmination of a refreshing and riveting celebration of International Women’s Day. Womanbition 2017  was indeed wholesome.