Watch this eye opening video by Australian 60 Minutes TV Program by Channel 9 in 1979.   Listen to the ignorance of this reporter as he interviews Bob Marley.   You can hear the condescension in his snarly voice.  Give thanks for our subscribers Nigel Myers, and alsoAbraham AMON  from Hungary at Reggaeocean.org for shining light on who this reporter is.

The journalist is George Edward Negus AM (born 13 March 1942) is an Australian author, journalist and television presenter specialising in international affairs.  He remains a director of his own media consulting company, Negus Media International.

Listen to the condescending adjectives he uses to describe our people.  He immediately started firing shots immediately in his first paragraph.  What a way to describe the disenfranchised people of Jamaica and Trench Town!  Take a watch, listen and learn from the past so we don’t make the same mistakes as fools and blind guides. 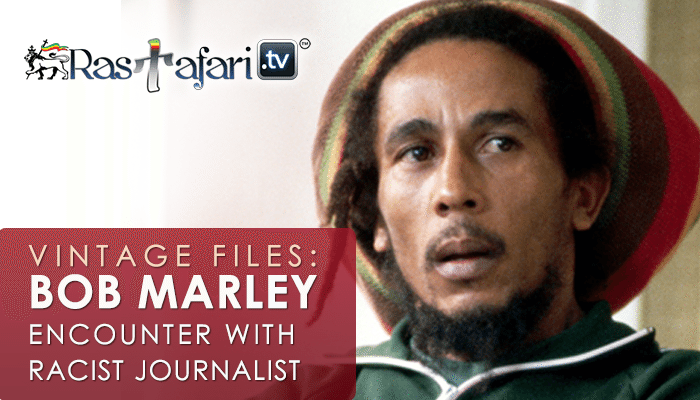 Maroons, the royal warriors and freedom fighters of Jamaica who defeated the British during colonial time have been displaced in the garrisons throughout Jamaica.   Look at the high cheek bones and ebony skin of these royal people, oppressed by the elite.  Through mis-education, they are made to believe they are poor, when indeed they are wealthy!   Trench Town and other garrisons house indigenous people displaced by colonial pirates.  These blood thirsty, genocidal vampires cause dependency upon their broken and deceptive,  illusion system, used as a ways and means to oppress the poor.  The poor no longer seek for self reliance but become systematically dependent.    Oh how much better a world it would be without ignorance and the support of colonial minded fools who breed this evil dis-ease known as racism white supremacy!

One must be careful to use words wisely to describe ourselves, others and our situations.   The Almighty is in full charge and we were created more than male and female pro-creators.  We are supreme beings having a physical experience while being made to live and balance in an unbalanced/immoral world.   Children of the Most High have been under attack since the beginning of time, especially those Divine children who have the most melanin.   This seed, formed from rich, dark earth have been persecuted since Adam, the first earth man was created.   The darker the earth, the more nutrient rich the soil so God formed first man and first woman from rich, dark, earth and every time the sons of Cain or seed of (s)atan see melanin, jealously and hate take root in the heart!

Skin color is a ways and means to separate us and inflame the emotion to lose focus on the bigger picture of why we were created and the fulfilling of our Divine destiny.   By using empowering multimedia, we are now able to share the truth and darkness is revealed.  The people now have a choice, whether to follow the truth or believe the lie and those who know better and do wrong shall be beaten with many stripes.

I remember reading, His Imperial Majesty said we should forgive our former colonizers.  It’s a bitter pill for some to swallow, but keeping with the law of love, forgiveness is one of the most powerful things we can do.  This yielding and obedience of truth is the path to the gift of a healthy and joyful life.

The body is made up of mostly water and chanting prayers and powerful words over water change the molecular structure. (Read more to know more about the hidden messages of water.)

So envision what happens when a people are told they are worthless, dirty, nothing more than filthy rags?  Now envision if we are taught we are born immortal, beautiful, perfect, powerful and free?

Break down the walls of mental slavery!