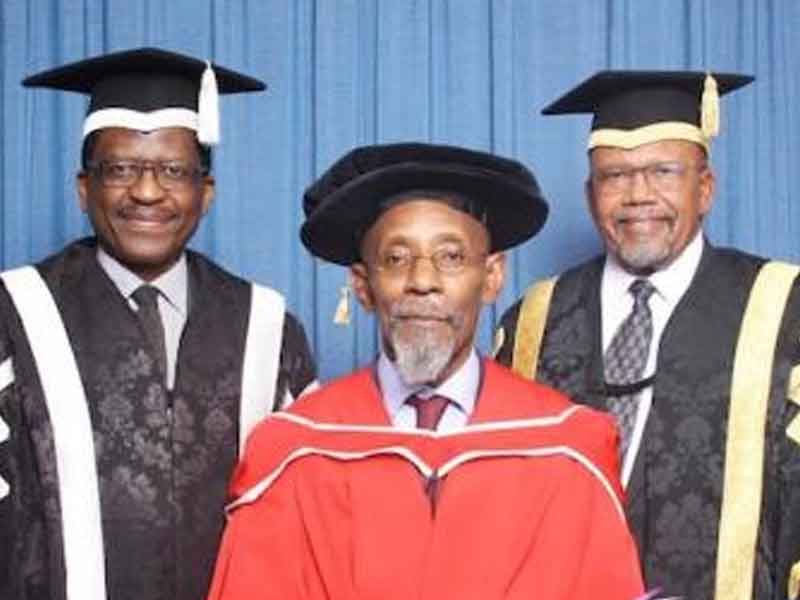 ACCLAIMED POET, reggae artist and political activist Linton Kwesi Johnson has received an honorary doctorate from Rhodes University in Grahamstown, South Africa in recognition of his “inspiring political activism”. His poetry and music were called “the soundtrack of the 1980s anti-apartheid struggle in South Africa”.

After he was presented with a doctorate in literature for his poetry on April 20, Jamaican-born Johnson addressed the large congregation of graduating students and their families. Whilst referring to the controversy surrounding the statue of Cecil Rhodes at Oxford, Johnson’s speech concentrated on public and personal links to South Africa.

He reminded the audience that Jamaica had been the first country to disassociate itself from apartheid South Africa and that one of South Africa’s most revered public intellectuals, Peter Abrahams, who died in January in St Andrew, Jamaica, was one of the island’s favourite adopted sons. The poet also spoke of the links created by reggae music.

Johnson reminisced about three key encounters with South African exiles in London back in the 1970s during his time as a Black Panther. Lawyer Barney Desai, race relations officer Lionel Morrison (later the first black president of the National Union of Journalists) and writer Lewis Nkosi all contributed to Johnson’s fight to clear his name after being put on trial for assault when he came to the aid of a black youngster being arrested with excessive force by police in Brixton, London in 1972.

Later on, in the 1990s, Linton Kwesi Johnson and the Dennis Bovell Dub Band played a reggae concert in Alexandria township in South Africa. During that visit in 1995, Johnson met Albertina and Walter Sisulu in Soweto. He has also given several poetry readings in the country over the last 23 years.

Johnson was nominated for this doctorate by Rhodes University’s Professor Rod Walker, Professor Robert van Niekirk, Professor S Naidu and Professor M Hendricks, who stated that they wanted to recognise Johnson’s “seminal contribution, through poetry and music, to decolonise the English language and the English literary canon”.

Johnson also attended a tribute event where South African poet Lesego Rampolokeng and others thanked him for his inspiring political activism and noted that his poetry and music were called “the soundtrack of the 1980s anti-apartheid struggle in South Africa”.