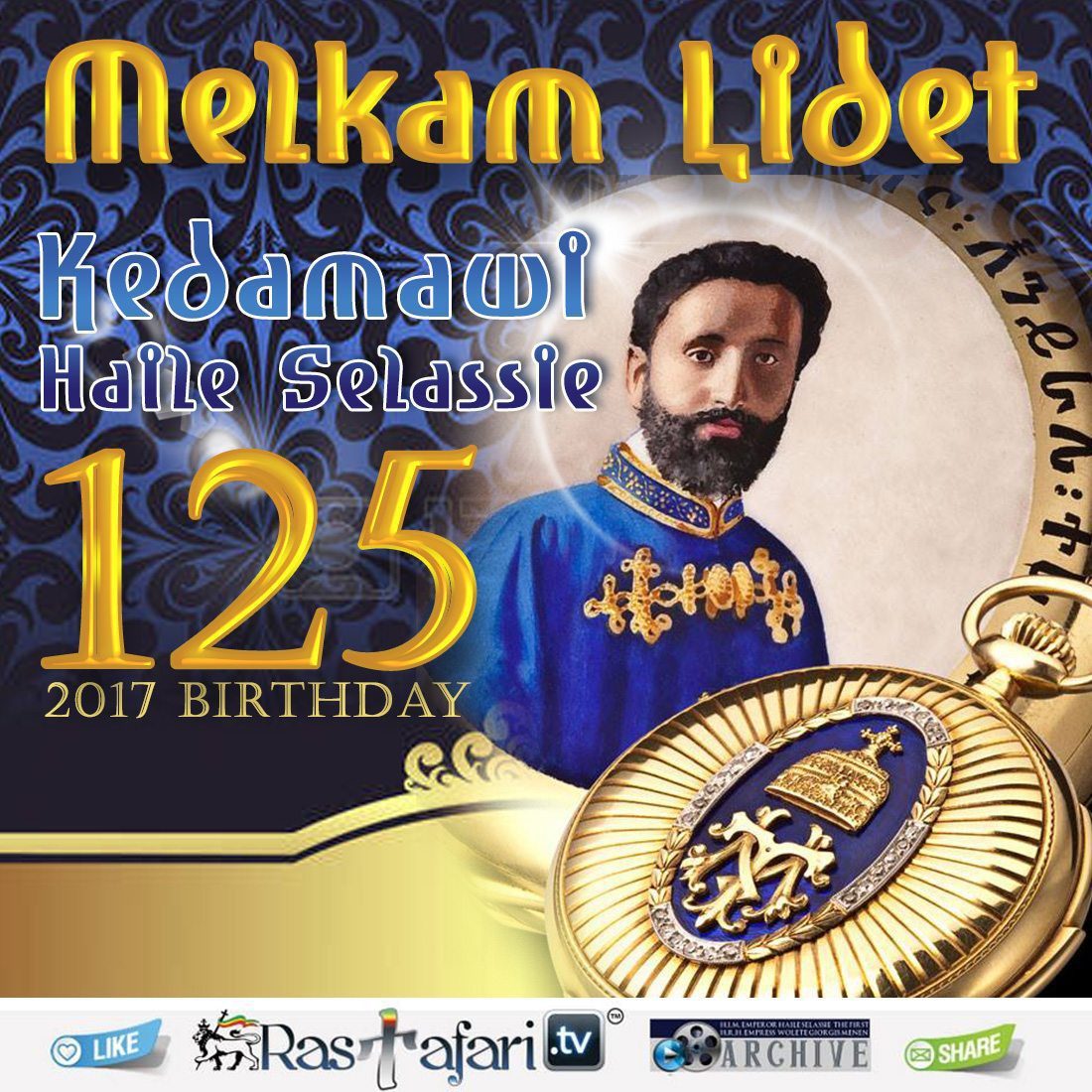 Today, July 23, 2017, marks the quasquicentennial of the Negus Negast (King of Kings), Girmāwī Kedāmāwī Haile Sellassie. On this day 125 years ago His Majesty’s given name at birth was, Lij Teferi/Tafari Makonnen Woldemikael in a mud hut in Ejersa Gora in the Harar province.

Lij translates to “child”, and serves to indicate that a youth is of noble blood. His given name, Teferi/Tafari, means “one who is respected to be reverenced or feared”. On the third day after his birth, he was baptized, and his baptismal name was Halie Selassie, which means the Power or Might of the Holy Trinity.   This  later became his throne name on November 2, 1930.

HIM Haile Sellassie 1st is known by many names, including Kedāmāwī/Q’edemawi, Germawi, Arko, Janhoy, Talaqu Meri, and Abba Tekel. The Great RasTafari Nation employs many of these appellations, also referring to the Emperor as Jah, Jah RasTafari, and HIM (the abbreviation of “His Imperial Majesty”).

Lij Tafari is the son of Woizero (“Lady”) Yeshimebet Ali Abba Jifar, daughter of the renowned Oromo ruler of Wollo province Dejazmach Ali Abba Jifar and Ras Makonnen Woldemikael Gudessa, the governor of Harar who was a cousin and close friend of Emperor Menelik II.

Girmāwī Kedāmāwī Haile Sellassie 1st ascended the imperial throne through his paternal grandmother, Woizero Tenagnework Sahle Selassie, who was an aunt of Emperor Menelik II and daughter of Negus Sahle Selassie of Shewa. As such, Emperor Haile Sellassie 1st claimed direct descent from Makeda, the Queen of Sheba, and King Solomon of ancient Israel.

HIM Haile Sellassie 1st spent his youth at the imperial court (court of the Emperor) of Addis Ababa, Ethiopia. Surrounded by constant political plots, he learned much about the wielding of power. Emperor Menilek II no doubt recognized Tafari’s capacity for hard work, his excellent memory, and his mastery of detail. Emperor Menilek II rewarded the youth’s intellectual and personal capabilities by appointing him the governor of Gara Muleta in the province of Harar and dejazmatch (commander) of the extensive province of Sidamo.

To all the Subjects of Selfless Service, Unlimited Love and Itinual Inity DARC hereby extends a most healthy and prosperous 125th Earthlight Commemorations.

* Written by DARC Foundation with revisions by RasTafari.TV Editor for added facts.