Loading posts...
Home Activism & Hue-man Rights Media Bias Comparison of Police Shootings : One was a 40 year old white woman called “the most innocent victim” The other was a 15 year old black boy

Media Bias Comparison of Police Shootings : One was a 40 year old white woman called “the most innocent victim” The other was a 15 year old black boy

First I would like to say violence and murder by anyone, including police, is always tragic. Police officers in the US shoot and kill nearly 1,000 people a year, according to the Washington Post’s database — far more than other developed countries like the UK, Australia, Japan, and Germany, where police officers might go an entire year without killing more than a dozen people, or often times no one at all. So far this year police have killed 668 people in America, the majority of whom have been individuals of color, according to killedbypolice.net, a website that tracks officer-involved killings. But if you’ve spent any time watching CNN over the past several months, you might have thought police had only killed one person, Justine Damond, an unarmed Australian woman in Minneapolis, Minnesota.

Her shooting was tragic. As is every shooting, especially one in which an unarmed individual is shot senselessly. She didn’t deserve to die, especially at the hands of a police officer. Diamond had called 911 to report an assault in her neighborhood, like any responsible citizen, and when police arrived, for reasons that have not been made clear, an officer shot her once in the abdomen, killing her. The police failed to turn on their body cams and have come under some well-deserved scrutiny.

Diamond was engaged to be married soon to a man who seemed to really care for her. CNN has shown him weeping, surrounded by friends and family, at a press conference. She was a yoga teacher and life coach, there are videos of her being “funny.” CNN has shown clips of these videos, and interviewed the Mayor of Minneapolis. They have parachuted in anchors to do live updates. Yesterday, on CNN’s “New Day,” which airs from 6–9am, they went live to their anchor in Minneapolis, twice, and re-visited the story throughout the day.

That’s fine. But what about Jordan Edwards? He was a 15-year-old high school student who was shot by a white police officer on April 29, 2017 while trying to leave a party with his brother and friends in a town outside of Dallas.

There was video footage of the incident. The car was driving away from the officer when he fired numerous rounds at the car Jordan was in. The officer, Roy Oliver, initially lied about what happened, saying that the car was driving towards the officer in an aggressive manner. Fellow officers heard the cop who shot Edwards call his brother a “nigger” just moments after the shooting. It was later revealed that the cop had a violent past.

There was just a big break in his case when Officer Roy Oliver was indicted on murder charges for that shooting. CNN’s website wrote about the charges a few times, but Jordan’s equally tragic story has received drastically less air time in comparison to Diamond’s. CNN didn’t parachute any anchors down to Texas for live shots. They haven’t interviewed Jordan’s parents. In fact, when it comes to recent officer-involved shootings, I can’t think of anything the network has covered with the same dedication and focus that they have shown in the case of Justine Damond, who was shot by a black 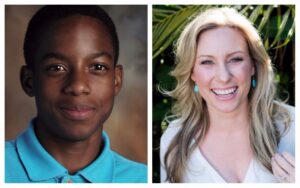 Somali-American police officer. (expect a rise in anti-Somali rhetoric) Her attorney has been quoted as saying she is “the most innocent victim” of a police shooting. Which should prompt everyone capable of free thought to ask “why?” Was she supposed to somehow be more innocent than 15 year old Jordan Edwards??  Did Charleena Lyles, who was pregnant and shot in her own apartment by Seattle police (in front of her children) after calling them concerning an attempted burglary, not deserve the same coverage due to her dark skin tone? What about Quanice Hayes, Alton Sterling, or Sandra Bland?

Yet with its wall-to-wall Justine Diamond coverage, CNN has proved that stereotype true once again. Jordan is just one of many examples of people who are lucky to get any coverage at all from. Unless they prompt riots or protests, sadly most officer-involved shootings don’t even get a nod.

U.N Security council calls for a ceasefire in Ethiopia, expressing "deep concern" over the escalation of fighting in conflict hit ...

State of Emergency: Why is Ethiopia at war with itself?

A state of Emergency has been declared in Ethiopia, as rebel forces march towards the capital. Ethiopian PM Abiy Ahmed has promise...

From a mosque founded by some of the Prophet Mohammed's first disciples to 6th century churches carved from rock, there are fears ...
Theme developed by TouchSize - Premium WordPress Themes and Websites