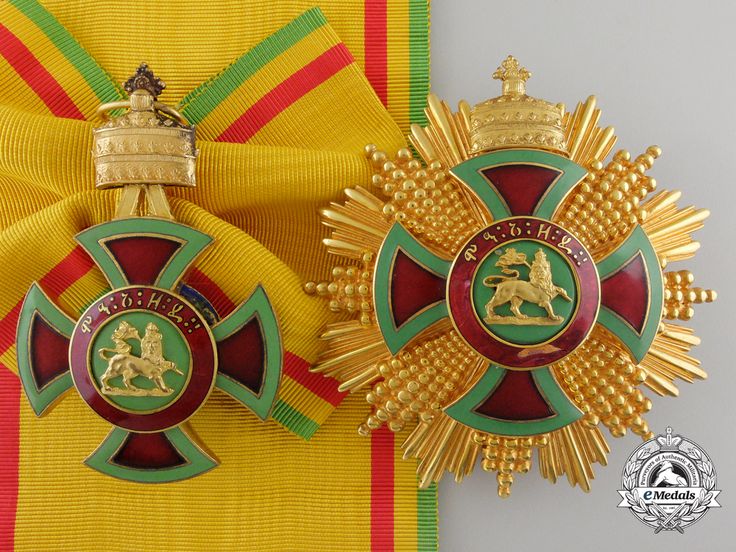 The Ethiopian Crown has traditionally bestowed honours in several orders of chivalry. Awarded for merit, most were established in the nineteenth and twentieth centuries on the model of the honours conferred by European monarchies. An exception is the older Order of Saint Anthony, distinctly religious in character.

Today, the Imperial Crown Council bestows decorations upon those who have made worthy contributions to Ethiopia, its people and culture, or, in certain instances, upon individuals who have contributed to the cause of African culture and unity. In keeping with Ethiopia’s multicultural heritage, most of these decorations are bestowed without respect to the conferee’s religion or nationality. There are both male ranks (knights) and female ones (dames) in most of the orders.

Founded in 1874 as part of the Order of Solomon’s Seal (see below) and bestowed in one rank (knight or dame), the Order of King Solomon is usually reserved to monarchs and heads of state. It is a rather ornate decoration suspended from a collar chain.

Order of the Queen of Sheba.

Empress Zawditu founded this order for ladies in 1922, but it was soon extended to gentlemen in several ranks. The insignia is a green and purple star of Solomon bearing, in the centre, the cipher of Queen Makeda suspended from a purple and pale green ribbon.

Order of the Holy Trinity.

Established in 1930 on the occasion of the coronation of Emperor Haile Selassie, this order was initially bestowed in several ranks but today is awarded almost exclusively in the grade of knight grand cross. The decoration is a gold medallion displaying the Holy Trinity on a sky blue enameled background, suspended from a red and gold ribbon.

Founded in 1924 to honour the Emperor of the same name, this order was often referred to as the “Order of the Lion” for the noble beast depicted in the centre of its green and red cross. The insignia is suspended from a deep gold ribbon lined at its edges in red and green, thus representing the Ethiopian flag. The order is bestowed in several ranks.

Order of the Star of Ethiopia.

This order was founded by Emperor Menelik II in 1885 based on an older decoration. Bestowed in several ranks, the Order of the Star is a multi-pointed gold filigree star set with jewels, suspended from a ribbon of red, gold and green.

Order of the Ethiopian Lion.

This is actually a newer order, founded in 1996 in the tradition of the Order of Menelik II, which was often referred to as the “Order of the Lion.” The decoration of the Order of the Ethiopian Lion is a circular medallion bearing, in its centre, the lion of Ethiopia. The ribbon is red, yellow and green. As it is not based on a cross, this order’s design is not considered offensive to Muslims. It is bestowed in several ranks.

Order of Haile Selassie I.

Founded by Emperor Amha Selassie I in 1992, to commemorate the centenary of the birth of his august predecessor, this order is bestowed upon Africanists and others in several ranks. The decoration is a cross enameled white bearing in its centre a likeness of Haile Selassie, suspended from a blue ribbon edged in the Ethiopian colours.

This is the oldest Ethiopian order of chivalry, bestowed exclusively on clerics, usually in the ranks of knight grand cross or companion. The decoration is a deep purplish blue Latin cross formy suspended by a striped ribbon of similar colours. The Order of Saint Anthony was bestowed in the latter Middle Ages by Ethiopia’s kings and archbishops, and implied membership in an elite confraternity.

Ethiopia's government is calling for the return of cultural artifacts plundered 150 years ago by British military forces. The reli...
Theme developed by TouchSize - Premium WordPress Themes and Websites