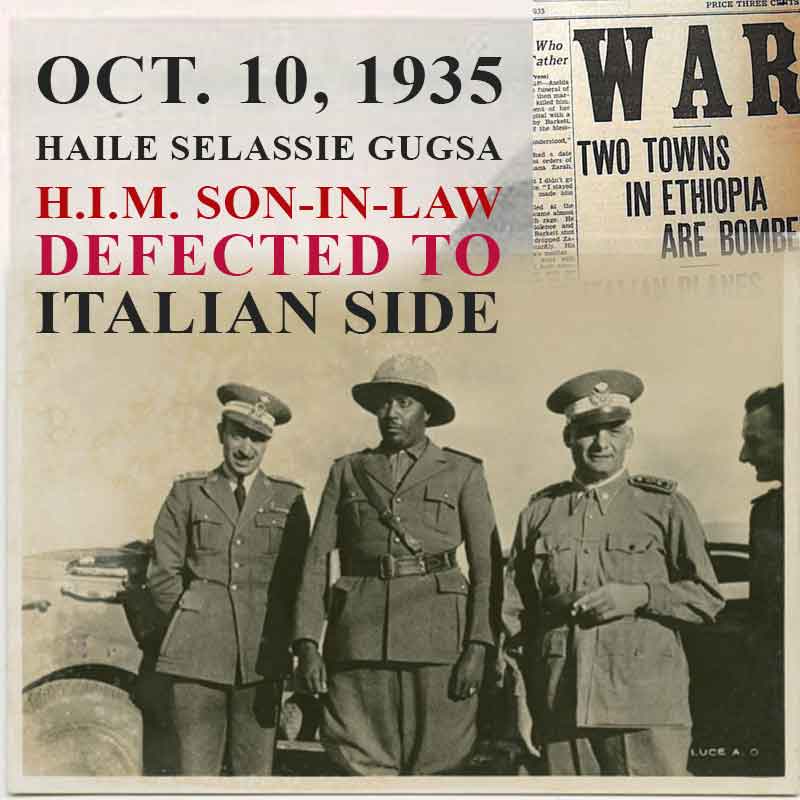 Haile Selassie Gugsa (1907 – 1985)[1] was an army commander and a member of the Imperial family of the Ethiopian Empire.

In April 1932, Gugsa Araya Selassie died and Haile Selassie Gugsa replaced him as Shum of eastern Tigray with the title of Dejazmatch.

On 15 June 1932, Dejazmatch Haile Selassie Gugsa married Leult Zenebework Haile Selassie, Haile Selassie’s second daughter.  He was about 25 years old and she was not quite 14 years old. Leult Zenebework died in 1934 amid allegations of poor treatment at the hands of her husband. Relations between Emperor Haile Selassie and Dejazmatch Haile Selassie Gugsa became quite cold after this. The strain between them was especially apparent when the Emperor insisted on bringing his daughter’s body back to Addis Ababa for burial rather than allowing her husband to bury her in the capital of eastern Tigray, Mek’ele. This was a clear sign of Emperor Haile Selassie’s unhappiness with his son-in-law. Dejazmach Haile Selassie on his part was very bitter that he was not elevated to the titles of Leul and Raswhich had been held by his father before him, and were held by his rival Seyum Mengesha of western Tigray.

On 3 October 1935, as Dejazmatch,[nb 5] Haile Selassie Gugsa was the commander in the Mek’ele sector when the Italians invaded Ethiopia. As the Italians advanced, Emperor Haile Selassie ordered Ras Seyum Mangasha, the Commander of the Ethiopian Army of Tigre, to withdraw a day’s march away from the Mareb River. Later, the Emperor ordered Ras Seyum to move back fifty-five miles from the border. Dejazmach Haile Selassie Gugsa, who was also in the area, was ordered to move back thirty-five miles. This was to demonstrate to the League of Nations that Italy was clearly the aggressor.

Some sources indicate that Haile Selassie Gugsa and his forces played an active part in aiding the Italian invasion. Other sources indicate his men were soon disarmed. Either way, Haile Selassie Gugsa remained loyal to the Italians who, at a minimum, used him for propaganda purposes during the balance of the invasion and during the five years of occupation. He was honored by the Italians with the title of Ras which had been denied him by Emperor Haile Selassie, as well as an Italian pension, and recognition as the senior Tigrean prince over his rival Seyoum Mengesha.

In May 1938, Haile Selassie Gugsa was in Italy to welcome German dictator Adolf Hitler when the Nazi leader paid a state visit to King Victor Emmanuel III. Hitler was visiting at the invitiation of the Italian dictator Benito Mussolini in Rome. Haile Selassie Gugsa watched as Mussolini’s son, Bruno, led a squadron of twenty-eight bombers that sank two 23,000-ton empty freighters in the Tyrrhenian Sea.

By 27 September 1939, during the Feast of Maskal in Addis Ababa, Ras Haile Selassie Gugsa, Ras Hailu Tekle Haymanot, and Ras Seyum Mangasha sat with Amedeo, 3rd Duke of Aosta, the Viceroy and Governor General of Italian East Africa (Africa Orientale Italiana, or AOI).[6] All three Ethiopian leaders had submitted to Italian control of what had been their homeland and what was now the AOI colony.

In 1946, after continued requests for extradition, Haile Selassie Gugsa was returned to the Ethiopians. In 1947, he stood trial and was declared a fascist collaborator and a traitor. Haile Selassie Gugsa then threw himself on the mercy of the Emperor. As a result, his death sentence was commuted to life imprisonment. He was placed under house arrest at Gore, and later at Ambo for twenty-eight years.  His Italian-supplied honorific title of Ras was not recognized and he reverted to his old title of Dejazmach.

In 1947, eastern Tigray was incorporated into western Tigray and was governed by Ras Seyum Mangasha as hereditary prince of all Tigray. Dejazmach Haile Selassie Gugsa and his side of the family of Emperor Yohannes IV fell from grace. They no longer enjoy favor either from the Emperor in Addis Ababa or from Ras Seyum Mangasha in Tigray.

The Derg and Death