Mexico’s Supreme Court ruled 4-to-1 Wednesday that outlawing the possession and use of the marijuana plant represents a violation of fundamental human rights. While the ruling does not mean that marijuana is now legal in the country — it only applies to the four plaintiffs in this specific case — it gives a tremendous amount of political space for lawmakers to introduce marijuana reform bills at the state and federal level in Mexico.

“It’s really a monumental case,” said Hannah Hetzer of the Drug Policy Alliance, a drug reform advocacy group, in an interview. “It was argued on human rights grounds, which is unusual, and it’s taking place in Mexico, the epicenter of some of the worst effects of the war on drugs.”

The case was brought by four members of Mexicans United for Responsible and Tolerant Consumption (the acronym SMART in Spanish), a group set up specifically to challenge laws on this issue in Mexico. Starting in 2013, theybegan filing legal arguments to be able to grow, possess and consume marijuana. This year, their appeals made it all the way to the Supreme Court. 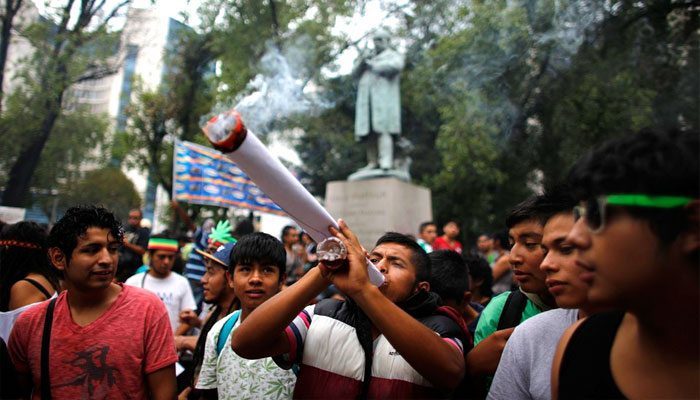 Their argument hinges on the concept of “the right to the free development of one’s personality,” which is enshrined in Mexico’s constitution. Essentially, it amounts to something like a right to self-determination: The state can’t prevent you from say, eating junk lots of junk food, even if it’s not great for your health. As long as you’re not harming other people, you have the right to autonomy. And in this instance, the Supreme Court ruled that possessing and consuming marijuana falls under this category.

Because of the way Supreme Court cases work in Mexico, the ruling means that the plaintiffs can now smoke up if they want to — but it does not immediately become the law of the land as it would in the United States. For that to happen, the court would have to hand down similar rulings for at least four other individuals or groups.

Big social issues have been decided this way before in Mexico — most notably, the country legalized same-sex marriage via this process earlier this year. Beyond that, lawmakers could decide to change the law through legislation.

The ruling does not extend to commercial marijuana enterprises, like the ones that exist in Washington and Colorado in the United States. But it does represent, perhaps, the first declaration of the right to use marijuana as a fundamental human right. And that could have rippling effects in other Latin American countries, like Uruguay and Chile, currently grappling with various marijuana legalization measures.

The ruling also puts additional pressure on the United Nations to update its decades-old system of drug treaties at a special session on drugs being held next year. Given marijuana developments in the United States and now Mexico, many drug policy experts say the U.N. must change the treaties if it is to maintain legitimacy. If this doesn’t happen, “more nations will move ahead unilaterally and then the conventions start to become irrelevant and nobody wants that,” says the Drug Policy Alliance’s Hetzer.

Hetzer suspects that full marijuana legalization may come to Mexico in the coming years on the heels of this ruling. She says that one big factor will be what happens next year when California voters decide whether to legalize marijuana in that state. “The big key component that everyone in Mexico talks about in shifting drug policy is whether California legalizes in 2016,” she said. “Washington and Colorado are one thing. But with California, with the significance it has and the border it shares with Mexico, if they legalize, it would be too much to ignore.”

Beyond that, Canada’s freshly minted Prime Minister Justin Trudeau has already promised to work on legalizing marijuana in that country. If Canada and California legalize and Mexico follows suit, that would mean that marijuana would be legal all the way from the Arctic Circle in the north to the Tropic of Cancer in the south.