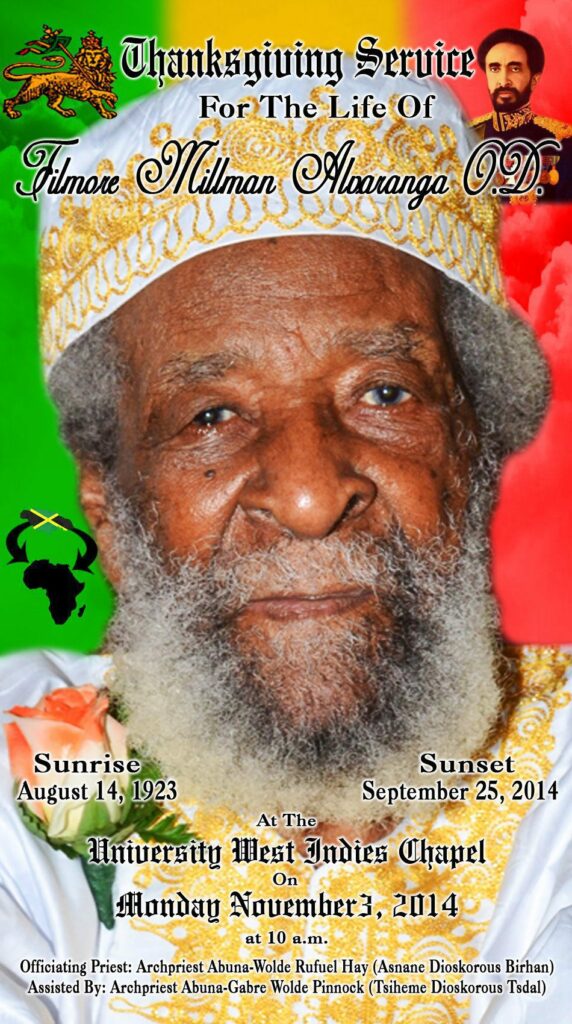 FILMORE Alvaranga, a respected elder in the Rastafarian movement and founding member of the Mystic Revelation of Rastafari, died September 25 in Kingston. He was 91 yearsold.

His daughter, Michele Alvaranga, told the Jamaica Observer that her father died while on the way to the Kingston Public Hospital. He had been suffering from the flu for three days and was seeking medical treatment.

Raised in east Kingston, Alvaranga was a committed Rastafarian for over 70 years. In a 1998 interview with the Observer, he said the work of Rasta pioneer Leonard Howell and Ethiopian Emperor Haile Selassie I inspired him to accept the Rastafarian faith.

Along with Oswald ‘Count Ossie’ Williams, Alvaranga started a cultural drum group in the east Kingston community of McGregor Gully in 1944. That group eventually became Count Ossie and the Mystic Revelation of Rastafari, one of the most influential groups in Jamaican music.

Their informal jam sessions in nearby Wareika Hills in the early 1950s attracted the country’s top musicians including saxophonist Tommy McCook and trombonist Don Drummond, both future members of the Skatalites band.

The Mystic Revelation of Rastafari backed the Ffolkes Brothers on the 1959 hit song, Oh Carolina, produced by Prince Buster. Count Ossie died in an auto accident in Kingston in 1976.

In 1961, Alvaranga was part of a government-funded, fact-finding mission to Africa. The group, which also included Rasta elder Mortimo Planno, visited five countries including Ethiopia where they met with Selassie.

Lance HoShing, a member of the Rastafarian community, said the diminutive Alvaranga was a cultural giant.

“He set the full foundation for reparation and repatriation. The work of Filmore Alvaranga should be recorded for the younger generation to learn,” HoShing said.

“He loved to talk about the Bible, culture, Rastafari,” she stated.

Alvaranga received the Prime Minister’s Award in 1983 and the Order of Distinction in 2009.

The Rastafari Millennium Council (RMC) salutes the life works of a great Warrior of the Rastafari Community! Dejazmach Filmore Alvaranga was a key member of the Mission to Africa in 1961 and 1965 along with Brother Douglas Mack, Ras Mortimo Planno and Sam Clayton. He now trods with our Rastafari Ancestors in Zion. His Thanksgiving Service will be on Monday, November 3rd 2014 at the University Chapel on the Mona Campus at  10:00 am. Condolences go out to his immediate family in their moment of grief.

The RMC must also acknowledge the recent transitioning of our Rastafari Ancients:

The Rastafari Community is being challenged  by the swift passing of our Ancients.  They will be greatly missed!!! Our efforts to maintain their works must be redoubled.

Bunny Wailer cannot die, he has transitioned." (Asadenaki Wailer) In shock and dismay, the world has to face the passing of Nevil...

Vaughn Benjamin, the lead singer of Midnight and Akae Beka, has died. He was 50 years old. Benjamin’s death was confirmed on Novem...

"I Have a Dream," Address Delivered at the March on Washington for Jobs and Freedom   Author: King, Martin Luther,...
Theme developed by TouchSize - Premium WordPress Themes and Websites