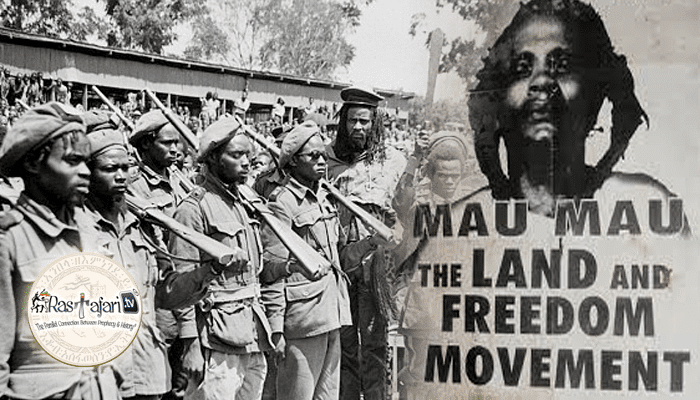 As long as we live in a world of class division and racial prejudice where the powerful opress the weak and disenfranchisement continues to tear away at humanity the struggle for the rights of the disenfranchised will continue; whether in Africa or Latin America or Asia or anywhere in the world. In the spirit of total resistance blessed be the righteous who stand with his or her brothers and sisters in the world wide struggle for equality and social justice. As long as there is a powerful elite there will always be a powerless disenfranchised. We must ALL as a people come together.

Some of the many Kikuyu tribesmen who were detained as Mau Mau suspects after the compulsory evacuation of all those Kikuyu’s accused of squatting in European farms in the Thomsons Falls area, Kenya on Nov. 30, 1952. The enclosure is surrounded by barbed wire. The tall structure seen in center background is one of the portable gallows brought from Nairobi for hangings. Eric Davies the member for Native Affairs, unseen, speaking in the Legislative Council during the committee on estimates, said on November 28, that the number of Kikuyu now interned at Thomsons Falls and in the Likipia area was 3,500. They were divided into those who came from the Nyeri, Fort Hall and Kiambu districts. (AP Photo)

Power struggles must end and mutual aid must begin

If we cannot learn to live together and learn to love one another and live in harmony with each other and the natural world we will have no world left to live. Its time to learn the lessons of the last millennia and stop repeating the same mistakes made by our forefathers. War is not a solution. Violence begets violence. Peace and co-existance in harmony is our only salvation.

The Mau Mau Uprising, a revolt against colonial rule in Kenya, lasted from 1952 through 1960 and helped to hasten Kenya’s independence. Issues like the expulsion of Kikuyu tenants from settler farms, loss of land to white settlers, poverty, and lack of true political representation for Africans provided the impetus for the revolt. During the eight-year uprising, 32 white settlers and about 200 British police and army soldiers were killed.  Over 1,800 African civilians were killed and some put the number of Mau Mau rebels killed at around 20,000. Although the Uprising was directed primarily against British colonial forces and the white settler community, much of the violence took place between rebel and loyalist Africans. Thus the uprising often had the appearance of a civil war with atrocities on both sides.

The uprising, which involved mostly Kikuyu people, the largest ethnic group in the colony, began to take shape when more radical Kikuyu militants were invited in to the nationalist KAU (Kenya African Union). Called Muhimu, these activists replaced a more moderate, constitutional agenda with a militant one. The Muhimu began widespread Kikuyu oathing, often through intimidation and threats. Traditional oathing ceremonies were believed to bind people to the cause, with dire consequences like death resulting on the breaking of such oaths. The British responded with de-oathing ceremonies.  Additionally, the Muhimu attacked loyalists and white settlers.

About this video:  A deep, inspiring video documenting former Mau Mau detainees from the Kenyan Emergency in the 1950’s. This BBC documentary is based on the research of Harvard Professor, Caroline Elkins. This documentary has been part of the evidence supporting the Mau Mau case in London’s High Court.

Although the exact origins of the conflict are in dispute, the war officially began in October 1952 when an emergency was declared and British troops were sent to Kenya.  The British response to the uprising entailed massive round-ups of suspected Mau Mau and supporters, with large numbers of people hanged and up to 150,000 Kikuyu held in detention camps.

Many Mau Mau rebels and armies based themselves in forest areas of Mt. Kenya and Aberdares. Urban militants, however, waged the struggle in Nairobi and other Kenyan cities. The largest single massacre of the uprising took place in Lari on March 26, 1953, with attacks by Mau Mau on loyalist Home Guard families.  Approximately 74 people were killed and about 50 wounded.  The massacre generated retaliatory attacks by Home Guard, settler, and colonial forces. The initial massacre and retaliatory attacks resulted in the deaths of around 400 people, although there is no official number and the reality of people killed may have been much higher. The Lari Massacre was a turning point in the Uprising where many Kikuyu were forced to choose sides in this resistance struggle.

Mau Mau forest armies were largely broken by 1957 and in 1960 the emergency was declared over. Following the rebellion, the British government did implement reforms.  Three years later, in 1963, Kenya received its independence from Great Britain.  One of the alleged Mau Mau leaders, Jomo Kenyatta, became the first president of the new nation.

Historians, social commentators, and surviving resistance leaders continue to debate the role of the Mau Mau in gaining Kenyan independence.  Many survivors on both sides of the conflict see themselves as participants in the independence campaign.  Moreover, in 2006, former Mau Mau fighters launched legal action against the British government under claims of mistreatment in detention camps.