Jan. 18: International Rastafari Protest to the Ethiopian Embassies Around The World

From the RUF we pledged Our 16 Countries Structures to respond to this Blasphemy and Offensive by the Oromo Central Authority and the Ethiopian Government and Our fellow Member States in the RCC pledged to do the same and we agreed on the date of the 18th January 2018 to launch simultaneous protest marches to the Ethiopian Embassies,write petitions and memorandum of protest to the AU and UN including NEPAD and the Pan African Parliament in Midrand.

We call upon the Rastafari Nationally,Continentally and Internationally to march to the Ethiopian Embassies in your Countries whether you have permit to march or not,whether your structures are registered or not,whether you are many or few. In South Africa we will be marching to the Ethiopian Embassy in Pretoria,send delegations to the AU,UN,NEPAD and Pan African Parliament. The International Rastafari Protest is on the 18th January 2018. United we take Rastafari to the Front. 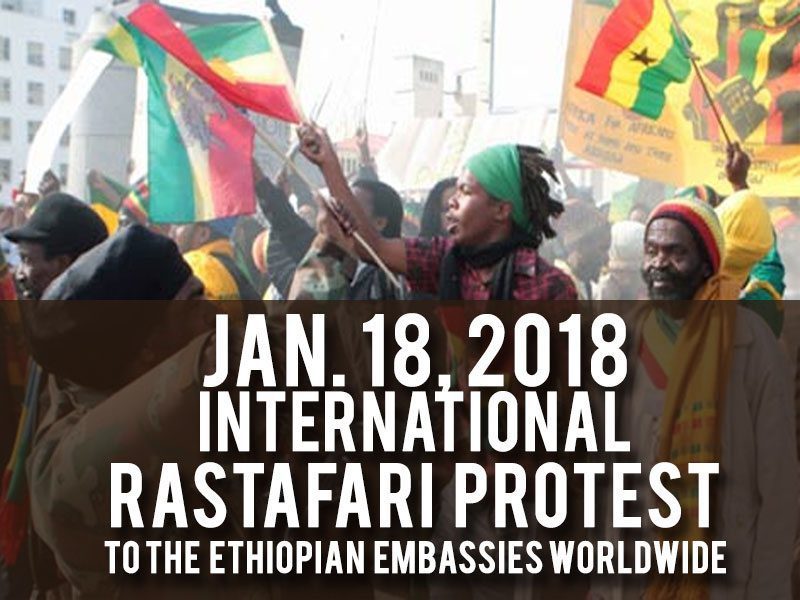 We greet you in the Divinity and Character of the Omnipotent, Omnipresent Qedamawi Haile Selassie.
It has been drawn to the attention the DARC Foundation that the RasTafari United Front in association
with the RasTafari Continental Council has called upon the RasTafari Nation Internationally to protest the
destruction of the Nyah Binghi Tabernacle in Ethiopia.

This International RasTafari Protest is scheduled for January 18, 2018.
We the member of DARC Foundation, are first and foremost citizens within the great RasTafari Nation,
and as such we are deeply disturbed by these developments. Nevertheless before we the Great
RasTafari Nation act irresponsible or irrational, please be fully aware of the facts surrounding this
impediment. Secondly this directive encourages lawlessness, wherein we are told to bypass the need for
permits where applicable.

Additionally we are pleading to the organizers, please CEASE AND DESIST from executing the
proposed 18th January protest. Embrace instead the eloquent words of Qedamawi Haile Selassie who
states that with power comes responsibility.

DARC Foundation recommends that instead of demonstrating at the Ethiopian Embassies worldwide, the
RasTafari Nation in its place establish a civil dialogue between RasTafari (Nyah Binghi) and the Ethiopian
Government. Our Nation must admit our role in helping to creating these tensions, distances and distrust
between the RasTafari and the indigenous Ethiopian Community.

According to the circulating memo; an “Ethiopian Government Official brought with him workers to come
dismantle the Nyahbinghi Tabernacle and claiming they need to extend the road to 8-12 meters
encroaching into the Nyahbinghi H.Q.”

Here are the facts:

The Great RasTafari Nation was fully aware that based on the His Majesty’s Government long term plans
that a road will be built where the tabernacle was propose to be erected.

This blueprint showing the plans was readily available at the municipal building in town where members
of the Ethiopian World Federation Incorporated was able to view it.

Initially, members of the Ethiopian World Federation, Incorporated informed the DARC Foundation that
when the Tabernacle was purposed in 1992 and the initial work was started the Centenary committee
knew of Ethiopian Government long term plans and it was unequivocally stated a road will be built
precisely where the tabernacle was erected.

Furthermore a member of DARC Foundation states that during his 1996 visit to Shashamane Land Grant
that he reasoned with Ras Solo and Ras Moya of the Centenary Committee about the road to be built.
Moreover at the 2007 EWF convention in Shashamane Ethiopia the issue of the tabernacle’s encroaching
onto the path of the King Highway was discussed and again dismissed.

Once again please reconsider your directive and never cease from adhering to the principles and moral
guideline of Qedamawi Haile Selassie.