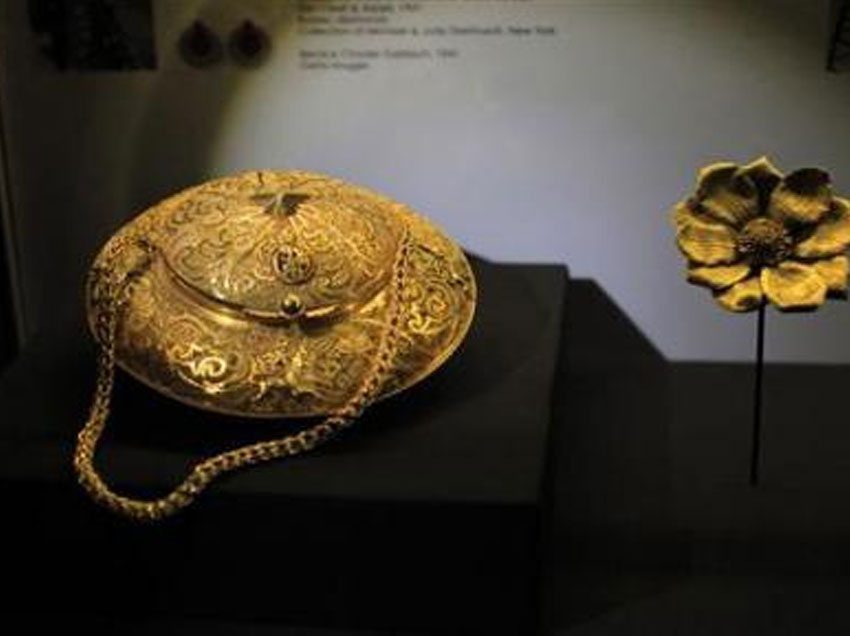 I am privileged to be a member of a very select private group on Facebook, where Ethiopians descendants of the royal family of Emperor Haile Selassie and his closest advisors and executives now living in exile exchange photographs, history and memorabilia about His Imperial Majesty and the history of modern Ethiopia.

One of the most beautiful and interesting stories shared on the page is the story of the Gold Purse, a pure gold ladies evening handbag carved with a filigree pattern and carried on a gold chain. The purse first came to our attention in a post which informed that it was going to be sold by a major auction house. Auctions of Ethiopian treasures, especially gold objects and medals, take place often much to the sorrow of the Ethiopians in this group, for whom these were not only works of art, but pieces of history. The massacres of the Emperor, the Royal family and his closest advisors by the Marxist leaders of the Derg revolution scattered those relatives who escaped, and who now live in exile unable to do much to salvage the treasures of an era.

The group’s founder and administrator Abbe Fekade brought good news that the Gold Purse was withdrawn from the auction, but the curiosity that was sparked by the immensely beautiful object led to interesting revelations from other members.

Edward L. Buddy King:  Gifts to be presented at State Dinner in honor of HIM visit to USA. Notice the gifts, most likely jewelery work done by Solomon Kibriye’s father…

I learned that the gold purse was a gift from H.I.M. To First Lady Jacqueline Kennedy on the Emperor’s first State Visit to the USA. He also gave her a full length leopard coat, and gave carved ivory toys to John John Jr and Caroline.

What then happened to the Gold Purse?

Edward L. Buddy King: Mrs.Kenndey did not turn the purse into the government as required for all foreign gifts. Several months ago it was due to go to auction by members of her family?

Barbara Blake Hannah: So who owns it now? Presumably it was sold after she died.

Bro Adam Simeon:  It was in this exhibit:

Notable – and notorious – women of the 20th century

“To stage the show, it was necessary to tell the story of women who made their mark– whether notorious or notable.

“We began by making a list of women, those from café society, the art crowd, fashionistas and celebrities, using old newspapers, books and magazines for research. Collaborating with the Museum of the City of New York, we used 50 dresses and 40 pieces of jewellery from 80 such women.

“Among them would be the Duchess of Windsor in Christian Dior haute couture, Lauren Bacall in her Tissue of Diamonds gown, Lena Horne in blue silk Giorgio St Angelo, and Babe Paley in Valentino – as well as writers/collectors Amy Fine Collins and Barbara Taylor Bradford – all placed next to vitrines containing accessories, such as the yellow gold handbag Haile Selassie gave to Jackie Kennedy and the bling bracelet of Joan Crawford.

MORE THAN ONE GOLD PURSE

My Ethiopian group friends enlightened me further. This was not the only Gold Purse given by H.I.M. Solomon Kibriye the son of the goldsmith who crafted this and other treasures, is a member of our group.

Solomon Kibriye: About the purse, my father made several evening bags of various designs that were given as gifts by H.I.M.

Edward L. Buddy King: ‎Solomon, that explains why this gold purse is on the display at the State Dinner for HIM given by President Johnson….both your father and Grandfather did excellent work.

So where is the golden purse now? It is quite the most beautiful handbag ever made. Not a single red carpet diva has anything like this!