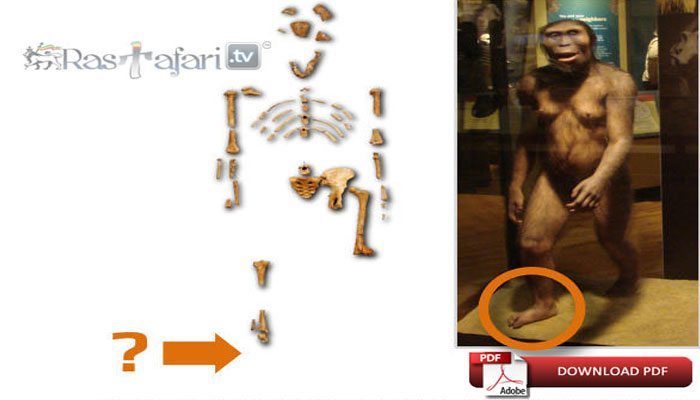 Lucy, Show Us Your Feet… “Lucy” (the type-specimen of the Australopithecus afarensis creature) is the most well-known hominin fossil ever discovered. Hominin is a word invented by evolutionists to describe what they consider to be “ape-like” creatures, and includes modern man (Homo sapiens). Lucy is often portrayed as one of the “best represented” fossil finds in support of human evolution. Lucy and her kind, Australopithecus afarensis, are promoted as the perfect transitional form linking the reputed chimp/human common ancestor (for which there is no fossil evidence) to modern Homo sapiens. Au. afarensis can be found in virtually every textbook where the topic of human evolution is mentioned. Artist’s representations of a life-like Lucy are found in museum displays all over the world. Lucy is promoted through all the popular media outlets such as Discovery Channel, PBS NOVA, Time, Discover, National Geographic, Smithsonian, etc. If you were to survey a random crowd of high school and college students regarding whether they have ever heard of the supposed “ape-like” creature, Lucy, the majority would likely raise their hands. However, essentially none of these students will have heard the full story about Lucy.

Discovered by Donald Johanson and his team in 1974 in Hadar, part of the Afar region in Ethiopia, “Lucy” was thus nicknamed while the team celebrated their discovery while listening to the Beatles song, “Lucy in the Sky with Diamonds.” The skeleton was 40% complete and is said to be the most complete and best preserved Australopithecine specimen recovered to date (“Australopithecine” is a broad term referring to all fossils of the Lucy type). 1 Textbooks say that although Lucy and her kind supposedly lived millions of years before modern humans evolved, Au. afarensis walked upright in a manner very similar to modern man. 2,3 Textbooks routinely show an artistic rendition of Lucy having an ape’s head but from the neck down, Lucy is represented as having a fully modern human body, with a modern spine, hips, legs, hands, and feet (Figure 1).3

Download The Full Story About Lucy on RasTafari TV

Exhibit A: The fossil itself is incomplete, but looks to be entirely ape

Does the actual fossil evidence suggest a human anatomy? It does not. The incomplete skeleton reveals that the size of Lucy is that of an ordinary chimpanzee, about three and a half feet high, the skull is the size and shape of a chimpanzee or similar type, and has the extended arms and shortened legs of an ordinary ape. Interestingly, the Lucy skeleton has no hands, the legs are largely absent, the feet are entirely absent, and the spine is very fragmentary (Figure 2). As Johanson himself writes in his 1979 Science paper that described his findings, “… a number of skeletal elements found at Hadar (particularly some of the hand and foot bones) are either absent or poorly represented at other sites, which makes meaningful comparisons impossible.”1 This begs the question. On what basis then, was it concluded from this fossil evidence that Lucy had human hands, hips, legs, feet, and spine?