Loading posts...
Home Activism & Hue-man Rights Ethiopian Runner Calls on US to Push for Human Rights in His Country
Spread the love

Feyisa Lilesa, the Ethiopian silver medalist in the marathon at last month’s Rio Olympics, was in Washington this week, calling on the U.S. Congress to take action in solidarity with Ethiopians protesting their government.

“I know that Americans are peace-loving people. My people are also peace-loving people, but they have been denied peace for a very long time,” he said in his native Afaan Oromoo at a news conference Tuesday on Capitol Hill. “People are calling for the freedom, democracy that you have here. We want the same things, and I call on the U.S. government to urge the Ethiopian government to make sure that democracy prevails in Ethiopia.”

Lilesa gained worldwide attention when he crossed his wrists as a sign of protest as he approached the finish line during the Rio men’s marathon. He is Oromo and made the gesture in solidarity with Oromo protests that have occurred in Ethiopia since last November over issues including land rights and fair representation in the government.

U.S. Representatives Chris Smith, a New Jersey Republican; Keith Ellison, a Minnesota Democrat; and Mike Coffman, a Colorado Republican, presented House Resolution 861, “Supporting Human Rights and Encouraging Inclusive Governance in Ethiopia,” during the news conference. The resolution calls on the government of Ethiopia to end the use of excessive force by security forces and investigate the killings and disturbances during protests in the Oromia and Amhara regions. It also urges the government to hold security forces accountable for wrongdoing through public proceedings. 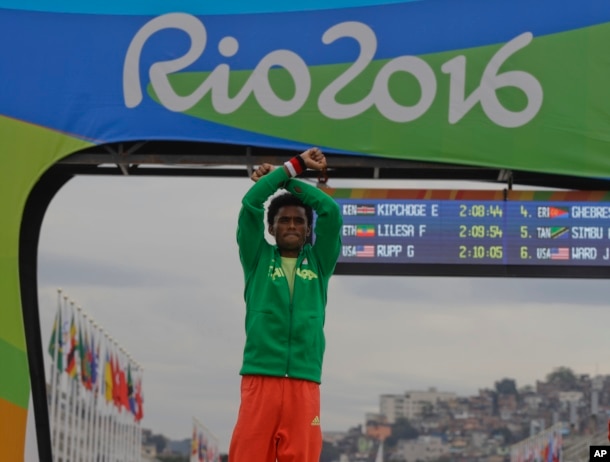 FILE – Silver medalist Feyisa Lilesa of Ethiopia crosses his writsts as he celebrates on the podium after the men’s marathon at the 2016 Summer Olympics in Rio de Janeiro, Brazil, Aug. 21, 2016. He had made the same gesture of protest as he approached the finish line of the race.

“He’s called for a major fact-finding effort where we could get to the bottom of people who are being killed, tortured, slaughtered in the streets, and then to hold the perpetrators of these crimes to account,” the lawmaker said.

“It’s an effort to say to Ethiopia, ‘Yes, you’ve been friends and allies in the war on terror. You’ve got some very good things with regards to Somalia, but you are mistreating your own people and it’s time we spoke out,’ ” Smith said.

Since Lilesa made his gesture, other athletes have followed suit. Ebisa Ejigu crossed his arms in the Quebec City Marathon in Canada, and Tamiru Demisse, an Ethiopian paralympic runner, did the same as he won his silver medal in the men’s 1,500 meters for the visually impaired at the Paralympics in Rio.

Lilesa, in the U.S. on a temporary visa, said he was figuring out his future but was not seeking asylum in the U.S.