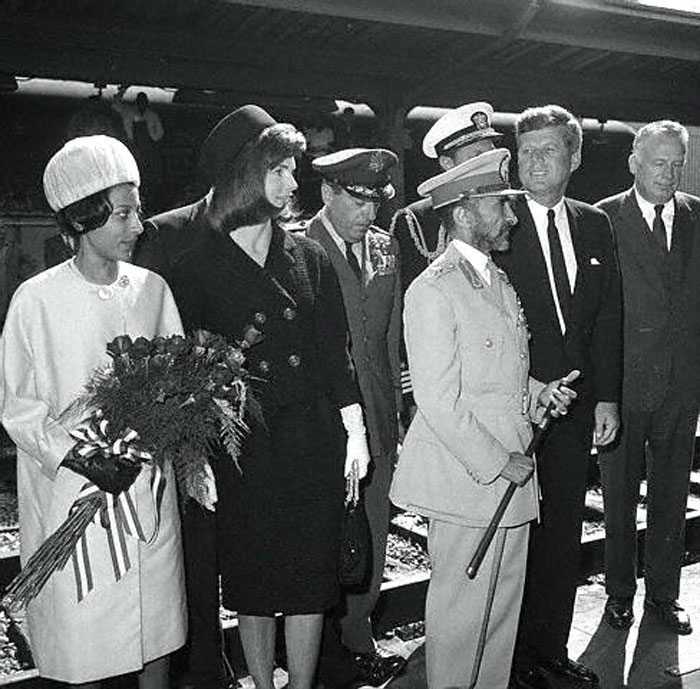 It is with deep regret that I must inform you all, that Princess Hirut Desta, granddauhter of Emperor Haile Selassie and daughter of Ras Desta Damtew and Princess Tenagnework Haile Selassie has died in London after a long illness.  The Princess Hirut (also known as Princess Ruth) was a woman of great energy and vision.  She was once described by Nathaniel T. Kenney in the April 1965 issue of National Geographic as a “trim, most democratic of princesses,” who “was not above grabbing a tool from a workman, I suspect, and showing him how to use it.”Princess Hirut was born to Princess Tenagnework and her first husband Ras Desta Damtew on April 20, 1930, just 17 days after her grandfather succeeded as Emperor of Ethiopia.  She was their third child after Princess Aida and Prince Amha Desta.  In May 1936, she accompanied her mother, siblings and grandparents into exile when Ethiopia was invaded by fascist Italy.  During this exile, her father Ras Desta Damtew, who had remained behind in Ethiopia to command the resistance to Italy in the south of the country, was captured and executed by fascist troops in 1937.  Emperor Haile Selassie was restored to the throne upon Ethiopia’s liberation from occupation in May 1941. The then Emebet (Lady) Hirut attended the Bolitho School of St. Clair, in Penzance, Cornwall, and then went on to Clarendon School in Abergale North Wales.  Upon her return to Ethiopia she became a teacher at the Empress Menen School for Girls founded by her grandmother, and went on to eventually become it’s director, working there for many years.  She became the Chairwoman for the Comittee for the Restoration of the Churches of Lalibela, and spent five years in the town working towards the preservation of the rock hewn churches there, and towards improving the lives of the towns people there.  She is credited with having the town made more accessible by having a modern road connect to it, and is credited with introducing electricity to the town.  She also caused to be built the Seven Olives Hotel which was the first tourist hotel in the town, and which helped make Lalibella a tourist attraction and world heritage site that it is today.  Princess Hirut was known as a very down to earth and practical woman who put on no airs and pitched in whenever there was work to be done.In 1968, Emebet Hirut Desta was married to Major General Nega Tegegne, and upon her marriage was elevated by her grandfather to the title of Princess with the dignity of Her Highness.  Princess Hirut Desta accompanied her husband when he became the commander of the Third Army Division from 1971 to 1974, and then to Gondar when he became Governor of Beghemdir and Simien in 1974.  In 1974 with the breakout of the Ethiopian revolution and the seizure of power by the communist Derg, General Nega Tegegne went into exile in the Sudan and became one of the founders of the monarchist Ethiopian Democratic Union led by the Prince of Tigrai, Ras Mengesha Seyoum (husband of Princess Hirut’s older sister Princess Aida).  Princess Hirut however joined joined her mother Princess Tenagnework, and her sisters Princesses Aida, Seble, Sophia, and other members of the Imperial family in Addis Ababa where they were imprisoned for 14 years in harsh conditions.  The princesses were freed and went into exile in the later years of the Derg’s rule.  Princess Hirut like much of the rest of the Imperial family has lived a quiet private life since that time, only emerging for a public role at the reburial of her grandfather Emperor Haile Selassie, and the funerals of her uncle Emperor-in-exile Amha Selassie, her mother Princess Tenagnework, her aunt Empress Medferiashwork, and most recently, her elder sister Princess Aida.  Her husband General Nega Tegegne died in May 2002 in London.  Princess Hirut held the GC of the Order of the Queen of Sheba, the Imperial Coronation Medal, the Imperial Silver Jubilee Medal, the 35th Coronation Anniversary Medal, and the Imperial Family Order of Haile Selassie I.  Princess Hirut accompanied her grandfather Emperor Haile Selassie on several overseas state visits, most notably to the United States where she was hosted by President and Mrs. Kennedy.  Emperor Haile Selassie and Princess Hirut were the first people of color to be invited to spend the night at the White House.Princess Hirut is expected to be laid to rest at Holy Trinity Cathedral in Addis Ababa in the coming days. She is survived by her sisters Princesses Seble and Sophia Desta, and numerous neices, nephews and cousins.  She had no children.

Negus (King) Mikael of Wollo, is relative of Queen Worqitu of Wollo and father of the uncrowned Emperor Iyasu V, with only one exc...

The history of the diplomatic relationship between Russia and Ethiopia is rarely known although its very interesting. Russia prov...

English Translation of the Original Amharic & Ge'ez text of the Liturgy & Programme of The Coronation (November 2, 1930) o...

She Met Her Prince (for Real!) at a D.C. Nightclub, Guyanese + Ethiopia Roots

Few love stories resemble a fairy tale as much as the courtship and marriage of Ariana Austin and Joel Makonnen. Of course, it hel...

Selam beautifuls! I recently had a spiritual breakthorugh by crying out to the Most High to SAVE ME!  Sept. 26, 2017 I heard an...
Theme developed by TouchSize - Premium WordPress Themes and Websites