It is for this reason that the Church of Christ and especially the Christian leaders have such an enormous responsibility. However wise or however mighty a person may be, he is like a ship without a rudder if he is without God. A rudderless ship is at the mercy of the waves and the wind, drifts wherever they take it and if there arises a whirlwind it is smashed against the rocks and become as if it has never existed. It is our firm belief that a soul without Christ is bound to meet with no better fate. 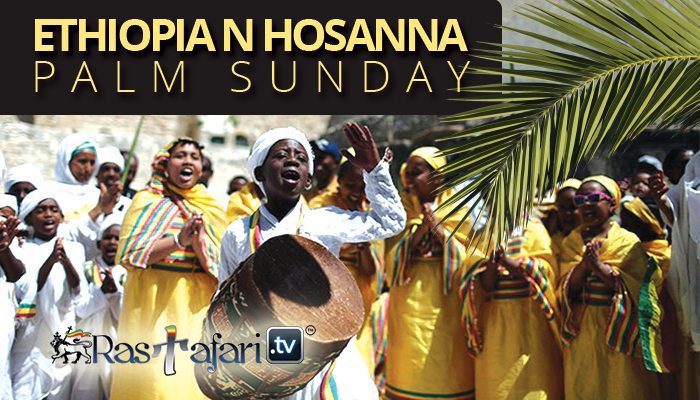 Sunday marks the last week, which is the 8th week, of lent liturgy in the tradition of Ethiopian Orthodox Tewahido Church. Hossana (Palm Sunday ) is celebration of entry of Yashua/Iyesus to Jerusalem. The song Hossana is a praise to Yashua/Iyesus. (Read Matt. 21: 1-11)

The last week of Lent is called “himamat” which stands for “passion week.” It is the week during which the laity live, theoretically, moments of pain leading to crucifiction of Yashua/Iyesus Christ. Along with the fasting, prostration is the hallmark of the week. Indeed a very solemn week.

The video reflect the spirit of Hossana / Palm Sunday in the orthodox traditions in the tradition of Ethiopian Orthodox Church.

Each year we Christians of the Ethiopian Tewahido Church begin Holy Week with Hosanna Sunday; we
read each year in Saint John’s Gospel the account of the Lord Yahsua/Iyesus’ Triumphant Entrance into ancient Jerusalem: ‘The next day the great crowd that had come for the Feast of Passover heard that Yahsua/Iyesus was on His way to Jerusalem. They took palm branches and went out to meet Him, shouting, “Hosanna! Blessed is He who comes in the Name of the Lord! Blessed is the King of Israel!” Yahsua/Iyesus found a young donkey and sat upon it, as it is written, “Do not be afraid, O Daughter of Zion; see, your King is coming, seated on a donkey’s colt.”’ (St. John 1:12-15)

All through the history of the world, men have conquered other men; stronger kingdoms have conquered
other weaker kingdoms and the citizens of one city have dominated their weaker neighbors. At times,
Emperors and or Kings have strived to conquer the entire world, as we have seen in Alexander the Great
and Julius Caesar. But there remains one uncharted territory that has eluded men of power all throughout history. This unconquered territory is the human heart, and its sole conqueror is Yahsua/Iyesus Christ the Eternal King.

Today, we celebrate together, one of the great Feasts of the Church’s Liturgical Calendar; the Feast of
Hosanna or as it is known in the West, Palm Sunday. Today we gather together to celebrate the Lord
Yahsua/Iyesus’ entry into the City of Jerusalem. Today we celebrate Christ Yahsua/Iyesus as the King who enters our own personal Jerusalem- our hearts. Today’s celebration is a momentary Feast of joy and festivity, because tonight we begin the final leg of our Lenten journey towards Resurrection, Holy Week. Our mood will change from one of joy this morning to one of solemnity as the reality that we have begun Holy Week sinks in. Today’s great festival celebration of Our Lord entrance with shouts of “Hosanna to the Son of David!” will lead up to the shouts of “Crucify Him! Crucify Him!; the great sacrifice that Yahsua/Iyesus performed for us on The Tree of the Cross.

The Feast of Hosanna -Palm Sunday has been celebrated in The Ethiopian Orthodox Tewahido Church since the earliest days of Christianity, but the use of Palms in connection with religious celebrations goes all the way back to Old Testament times. Oddly enough Palm trees did not grow around the city of Jerusalem in great numbers and people would often buy imported Palms for religious celebrations, in particular The Feast ofTabernacles celebrated at the Temple in Jerusalem. The Palm branch was used as a visual tool proclaiming the sovereignty of Almighty God as the true King of the Israelites.

With the expectation of the Messiah, the “Anointed One,” and the events of the Lord Yahsua/Iyesus’ ministry on earth, word traveled quickly around Judea that Jesus was the One whom the Prophets had spoken about and whom everyone was expecting. Yesterday, in the Biblical account, Our Lord Yahsua/Iyesus performed a miracle by raising Lazarus from the dead, the miracle that foreshadowed His own glorious Resurrection next Sunday. Now everyone is convinced that this is the Messiah-King who will save the Israelites; and the Lord Jesus fulfills the Prophecy of Zachariah, by entering Jerusalem on a colt of a donkey.

All of Israel is preparing to go to Jerusalem for the Feast of the Passover, and the Lord enters also as the Salvific King who will save Israel not from the tyranny of the pagan Roman Empire, but from the curse of death through His own Passion, Death and Resurrection. For Orthodox Christians around the world, we celebrate these events as they happened not only in the past, but as they also happen today. We celebrate Christ Yahsua/Iyesus as the King who enters our hearts, our own
personal Jerusalem. But is Yahsua/Iyesus able to enter? Is there room in our hearts for Yahsua/Iyesus to rule as our King?

Often the doors of our own hearts are securely locked. Often the Lord is unable to enter because there is already another king of the heart – ourselves! How do we solve this problem, you ask me, of trying to let Yahsua/Iyesus in? How do we implant within ourselves the one thing that is missing, the Son of God? The answer is to surrender! Surrender to the will of Almighty God. Surrender your life to the One Who gave you life. We are constantly bound and held captive by the temporal things of this life. We are
prisoners of our own selves, of this world, of our careers, of money, of the politicians who rule over us, we are even slaves to our own passions.

The only way to find peace, to find true happiness, to experience true love is to surrender yourself to the Son of God, to make Him your King, to live in total communion with Him. The way in which we turn our hearts from the kingdom of the self into the Kingdom of Almighty God is through constant daily prayer, reflection, and meditation, frequent, and I speaking of weekly partaking of Holy Communion, frequent Confession of our sins to our Parish Priest or Spiritual Father, reading and understanding the Sacred Scriptures, etc. So many people grumble that they can’t find time to come to Church, they can’t find time to pray and read the Scriptures, they can’t find time to Fast, or go to Confession and receive the Saviour in Holy Communion. The reason they don’t have time is that they are slaves to their own selves, to their own will.

Let us prioritize and place Yahsua/Iyesus the Messiah as the primary concern in our lives. It is only when we have done this that we will find true peace and happiness in such a confused and complex world.

Hosanna to the Son of David! Blessed is He who comes in the Name of the Lord! O King of Israel,
Hosanna in the Highest!

In The Name of the Father, and of the Son, and of the Holy Spirit, One and only God. Amen.