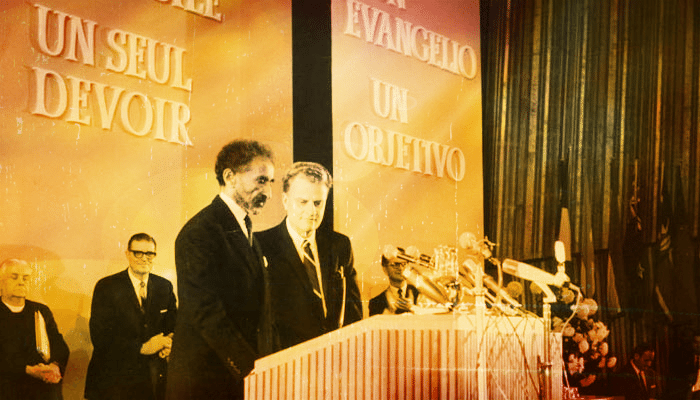 As Jesus Christ has said: “Where two or three are gathered together in my name, there am I in the midst of them.” It is therefore our expressed hope that these words will be realized in their full significance in this great assembly.

We are happy to be present in this famous city of Berlin where Christian leaders are assembled to consider ways and means of spreading our Christian faith in the world. We thank Mr. Billy Graham for inviting us to address this meeting. The propagation of the Christian faith among nations has become a task of paramount importance in this age as is evidenced by this great assembly of Christian leaders.

As you all know, it is centuries past since our country, Ethiopia, accepted the Gospel of Christ. We learn from the Holy Scriptures that the first Ethiopian who confessed faith in Jesus Christ was baptized only a few months after the death and resurrection of our Lord. From then on Christianity spread steadily among the Ethiopian people and became the religion of the Ethiopians in the Fourth Century A.D. It is a matter of pride for us and a special cause for thankfulness to Almighty God when we recall that the Christian faith was introduced to our people by the Imperial Court and through the instrumentality of the then reigning monarchs.

Ethiopian history testifies that our ancestors who rose after the first Christian emperors were men and women who had great zeal and keenness for the faith of Christ and who did all in their power for its propagation among our people. Many among them, like Emperor Caleb who lived in the Fifth Century and Emperor Lalibela and their immediate predecessors who lived in the Twelfth Century, have been canonized.

When the countries of the Middle East, North and North-east Africa and Asia Minor, where the Gospel was preached by the Apostles, were overrun by and succumbed under a power opposed to the Christian faith, the sovereigns and people of Ethiopia, firm in their deep love for the faith of Christ and supplemented. by the nature of their native land, put up great struggles to preserve Ethiopia as an island of Christianity. Deep is our thankfulness to our God for this grace. Numerous are our ancestors, who throughout the centuries, consecrated and sacrificed their lives on the battlefield that Ethiopia might survive strong in her Christian faith.

When, after all these worthy predecessors we assumed the leadership of our people half a century ago, we became acutely aware of the magnitude of the sacred trust and responsibility vouchsafed to us to work for the glory of God and the continued and lasting welfare of our people. During the past fifty years not only did we labor that our people may lead a better life while on this earth but we also did not spare our energy and treasure to develop their spiritual heritage the value of which no human mind can assess.

We have labored that the Holy Scriptures and the books left us by the Church Fathers be multiplied by means of modern printing technique and be distributed to all not only in our modern language, but also in Geez, our ancient language. Our Ethiopian Orthodox church, which was out off for centuries from her fellow Christian churches has joined the World Council. of Churches and cooperates in the task of strengthening the faith and bringing about church unity. We have helped and will continue to help the missionaries who are sent from other lands to preach the Gospel to those of our people who have not come to the knowledge of God’s saving grace. As the unity of the church is of great concern to us and, God willing, being hopeful that this sacred objective might be achieved in our day and age, we were happy to have convened two years ago a meeting of the Heads of the Oriental Orthodox churches in our capital city of Addis Ababa to deliberate on ways and means of bringing about harmony and unity in the church.

We refer to all this only to indicate that this age above all ages is a period in history when it should be our prime duty to preach the Gospel of Grace to all our fellow men and women The love shown in Christ by our God to mankind should constrain all of us who are followers and disciples of Christ to do all in our power to see to it that the Message of Salvation is carried to those of our fellows for whom Christ our Saviour was sacrificed but who have not had the benefit of hearing the Good News.

Since nobody can interfere in the realm of God we should tolerate and live side by side with those of other faiths. However, if the threat is posed we shall not fail to resist with courage any such incursions. We wish to recall here the spirit of tolerance shown by our Lord Jesus Christ when He has given forgiveness to all including those that have crucified Him.

In these modern days, there are a multitude of things published in print and broadcast by radio which captivate the human mind and spirit; many new ideas are disseminated by the learned. Many wonderful appliances are produced to make life more and more comfortable. The rich powers have passed on from exploring and exploiting this earth and are vying with each other to explore and conquer the moon and the planets. Knowledge is increasing in a bewildering manner. All this is good, wonderful and praiseworthy. But what will be the end of it all? it is our firm belief that only what the Lord wills will be done. We should be careful that the results thus achieved by mankind should not meet with the fate of the Tower of Babel, the handwork of those people of old which came to pieces in their hands. The Apostle Paul says: “The wisdom of this world is foolishness with God” and “The Lord knoweth the thoughts of the wise, that they are vain.” The reason for this is because generally speaking man makes himself and his wisdom the beginning and the end of his aim in life, and we are convinced that the end of this is destruction and death.

Our Lord Jesus Christ says: “What is a man profited if he shall gain the whole world and lose his own soul?” or “what shall a man give in exchange for his soul?” Why did the effort of those who tried to build the Tower of Babel come to nothing? Was it not because they tried to live apart from their Creator, and because, vaunting themselves in their wisdom, they tried to build a tower whose top was to reach unto heaven and thus make a name for themselves? It is our conviction that all the activities of the children of men which are not guided by the Spirit and counsel of God will bear no lasting fruit; they will not be acceptable in the sight of the Lord and will therefore come to nought as the Tower of Babel came to nought.

It is for this reason that the Church of Christ and especially the Christian leaders have such an enormous responsibility. However wise or however mighty a person may be, he is like a ship without a rudder if he is without God. A rudderless ship is at the mercy of the waves and the wind, drifts wherever they take it and if there arises a whirlwind it is smashed against the rocks and become as if it has never existed. It is our firm belief that a soul without Christ is bound to meet with no better fate.

Therefore, O Christians, let us arise and, with the spiritual zeal and earnestness which characterized the Apostles and the early Christians, let us labor to lead our brothers and sisters to our Saviour Jesus Christ Who only can give life in its fullest sense.