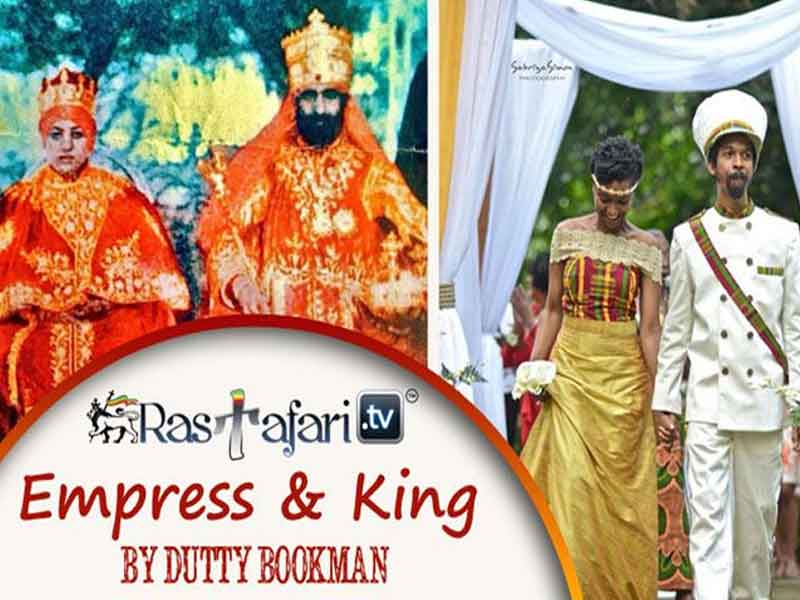 I can’t remember the exact day but there was a moment in my life when I consciously decided that I wanted to be Jesus. At least, I might have said it to myself that way at the time but now I know that what I was pursuing was the Christ consciousness. Not to be Jesus exactly, but to take his example from his unique life and apply it to my life that is also unique. Eventually, Jesus stepped aside and made way for Haile Selassie I. It is HIM who is proving to be the more suitable exemplar during this newly emerging era for humanity. Personally speaking, Haile Selassie has consistently unfolded the blueprints for what I aim to accomplish along my own journey.

One of the things that I have always wanted was a family. Ever since my adolescence, I have searched actively for my wife, one worthy to incubate my seeds and raise the resulting progeny, one worthy to grow by my side and vice versa, one with whom I could create the stable family I sought. The stories known about Jesus provide no guidance on this matter. Jesus led a different kind of life, an important life but not my kind of life. For instance, I don’t need 12 men hanging around me all day, every day. I won’t find balance without a strong woman.

Emperor Haile Selassie I is known for his thoughtful actions as a political leader upon whose shoulders rested the government of Ethiopia and who provided unprecedented leadership in world governance too. Putting aside those facts for a moment, one will find that His Imperial Majesty also led by example on the matter of women’s rights. I dare say that he was one of the earliest champions for the empowerment of women when he broke with Ethiopian tradition in 1930 to be the first emperor to have his queen, Empress Menen Asfaw, centrally featured at his coronation. Before that conscious and deliberate action by Haile Selassie, the coronation of an empress typically happened on a day after the emperor’s coronation, and hers would occur with much less fanfare.

His Majesty’s relation to his wife was not just a symbolic affair. He loved her deeply. Empress Menen passed away in 1962 and, after a period of mourning, Haile Selassie addressed the nation on February 15, 1962. In his documented speech, he said two things that impressed me. The first of these utterances was when he said, “During the memorable days of our companionship, we never had differences that needed the intervention of others.” The next thing was that he gave thanks “to the Almighty” for being blessed with a “long and uninterrupted union, which is not very common in the world today.”

I read that speech shortly before my own marriage ceremony and it sat well with me. It sat well with me because I reflected on my years already spent with the woman who I was declaring publicly as my queen. In all the years we have so far spent together, we have surely had differences but none so detrimental as to require solutions by anyone but ourselves. No family, friends or professional counsellors have ever been needed because we both usually realize that our differences were insignificant in the context of our aligned, long term family vision. I was thankful that I could say to myself what Haile Selassie declared to his nation, although Empress Sasha and I have many more years to go before we will become as seasoned as HIM and his queen. I realized that, in Selassie’s words, “there could be no more profound prayer for me to utter” than a “long and uninterrupted union.” If we will be so blessed as to witness our generations grow, sitting at each other’s side, then I might find a joy to surpass that of seeing my individual works manifest on Earth.

In the most fatidic way, completely unplanned by us, our marriage ceremony happened on International Women’s Day. The event turned out to demonstrate an abundance of healing, feminine energy and I was very happy about that. I have always been reverent to that Mother Earth power, which men have long feared. We dominate the planet with the most destructive aspects of our masculine energy but I have been able to learn from experience that we men have a more noble purpose. We can be manly, even militant men while lifting up the women to their rightful place. A man cannot rule alone, whether it’s a nation or a household. Without the woman, your province is sure to collapse. Beginning with my choice of wife, I have decided to do what I can to bless my generations to come. I give thanks to the Almighty for recognizing the contrite and trying man that I am, and for blessing me with this great new beginning despite my faults.

Queen Sasha Bookman and I, co-creators of our reality with the blessings of Jah. (Photographer: Sabriya Simon)

I am Dutty Bookman, a thinker, an instigator, a family man. I am deeply affected by the human condition and I always seem to be working on ways to improve it for future generations. I have idealistic visions of life and what it should be, and I am learning to balance these visions with the practical strategies needed to achieve them. I resolved some time ago to walk a revolutionary path and, with diligent effort, I am proudly serving a community of likeminded people as we endeavor to become members of a new race, transcending petty divisions in the hopes of everlasting peace.