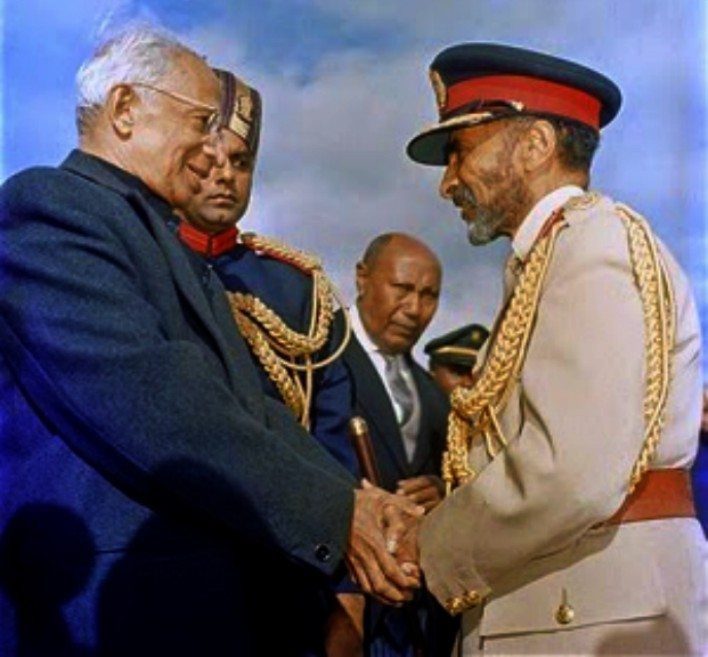 On the occasion of Your Excellency’s visit to Our country it gives Us special pleasure to receive you at this institution itself dedicated to the pursuit of knowledge and truth. It is altogether fitting that Your Excellency should be the focus of this occasion, for Your Excellency has yourself since your youth been dedicated to that cause. Your marked achievement to the august rank of Professor at the youthful age of twenty-eight, your consistent endeavor to pursue knowledge and the numerous books that have flowed from your pen, to this bear witness.

Today more than ever before man realizes the bond of unity that exists within the race; he is endeavouring to employ the accumulated knowledge and wisdom of the ages. He is employing modern science and technology; he is reaping the benefits, however limited, of political and economic unity; and to that extent, he is transcending the age-old barriers that have divided the race so long and is endeavouring to reflect on the welfare not only of himself and his immediate neighbour but also on the welfare of all the human race. This endeavour is in harmony with the spirit of the mystics of ages gone by “…in the mystic traditions of the different religions we have a remarkable unity of the spirit. Whatever religions they may profess they are spiritual kinsmen. While the different religions in their historical forms bind us to limited groups and militate against the development of loyalty to the world community, the mystics have always stood for the fellowship of humanity,” so Your Excellency has taught us. And in an effort to carry out this teaching to pursue truth – to promote those bonds common to the human race – Your Excellency has dedicated your whole life. To free the human race from superstition and fear that originate from ignorance; to enable him to transcend the apparent obstacles of race and religion; and to help him recognize the blood-ties of the whole human race, Your Excellency has laboured. To this generation, so tormented between modern knowledge and ancient faith, your scrupulous studies have pointed the way by which man may be saved from traditional superstition and modern scepticism.

Were the thoughts of Plato and Socrates, the beliefs of Christianity and Judaism not harmonized with Hindu philosophy; were Yoga and its various stages not exposed to Western thought; had Western religion and philosophy not been exposed to the philosophy and religion of the East through Your Excellency’s persistent endeavour, how much the poorer would human thought have been!

In the history of the human race, those periods which later appeared as great have been the periods when the men and the women belonging to them had transcended the differences that divided them and had recognized in their membership in the human race a common bond. Your Excellency’s constant endeavour to challenge this generation to transcend its differences. to recognize its common bond and to work towards a common goal has doubtless made this age pregnant with greatness. It is, therefore, in recognition of these labours that We, with unequalled pleasure, bestow upon Your Excellency the degree of Doctor of Letters, honoris causa.

The Negus returns to Ethiopia 1941 after Italian occupation and Europe becomes engulfed in war...which eventually claims the Fasci...

H.I.M. Emperor Haile Selassie I went into exile from 1936 to 1941 when Ethiopia was invaded and occupied by Italy. The first four ...
Theme developed by TouchSize - Premium WordPress Themes and Websites
%d bloggers like this: