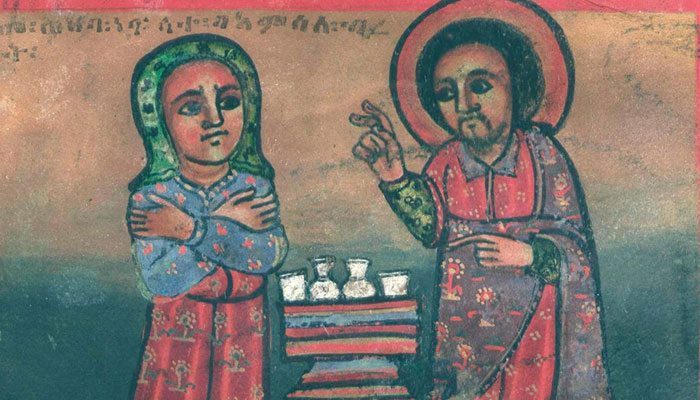 Ethiopian noblewoman Walatta Petros left her husband to stop the spread of Roman Catholicism, possibly fell in love with a fellow nun and was elevated to sainthood.

RTV NOTE:  Most Europeans look upon the purity and the closeness of the culture of Ethiopians/Africans and mistake pure love for carnality.  Though this article is very enlightening, we stand in solidarity with our Habesha family and denounce the thought that Walatta Petros was a lesbian.  We’ve seen African men and women bathe nude, hold and and even kiss on the lips and it’s a part of a communal culture and not to be mistaken for the lifestyle of the Sodom and Gommoraites.

The earliest known book-length biography of an African woman, a 17th-century text detailing the life of the Ethiopian saint Walatta Petros, has been translated into English for the first time.

Walatta Petros was an Ethiopian religious leader who lived from 1592 to 1642. A noblewoman, she left her husband to lead the struggle against the Jesuits’ mission to convert Ethiopian Christians to Roman Catholicism. It was for this that the Ethiopian Orthodox Täwaḥədo Church elevated her to sainthood.

Walatta Petros’s story was written by her disciples in the Gəˁəz language in 1672, after her death. Translator and editor Wendy Laura Belcher, an associate professor at Princeton University, came across the biography while she was studying Samuel Johnson’s translation, A Voyage to Abyssinia. “I saw that Johnson was fascinated by the powerful noble Ethiopian women in the text,” said Belcher. “I was speaking with an Ethiopian priest about this admiration and he told me that the women were admired in Ethiopia as well, where some of them had become saints in the Ethiopian church and had had hagiographies written about them.”

Ten years later, Belcher still remembers how “thrilling” this revelation was. “What? Biographies of powerful African women written by Africans in an African language? And to be able to pair European and African texts about the same encounter? I knew then I wouldn’t rest until I had translated this priceless work into English.”

Belcher learned Gəˁəz in order to translate Walatta Petros’s biography, working first with the Ethiopian priest, and then with the translator Michael Kleiner. “As a biography, it is full of human interest, being an extraordinary account of early modern African women’s lives — full of vivid dialogue, heartbreak, and triumph. For many, it will be the first time they can learn about a pre-colonial African woman on her own terms,” she said.

The biography has now been published in English by Princeton University Press as The Life and Struggles of Our Mother Walatta Petros. It has only been translated into two other languages before: Amharic and Italian, the latter in the 1970s.

While researching the text, Belcher discovered that the biography contained the earliest known depiction of same-sex desire among women in sub-Saharan Africa, an element she said was “censored” from the manuscript that the 1970s Italian edition was based on.

Belcher writes in the book’s preface that while she and Kleiner were translating the story from the Italian edition, they came across a “perplexing anecdote about a number of community members dying because some nuns had pushed each other around”. Kleiner suspected the manuscript had “been miscopied, perhaps deliberately, in order to censor the original, or merely by accident”, and speculated that “the nuns were not fighting but flirting with each other”.

After consulting with several Ethiopian scholars and looking at digitised copies of the original manuscripts, Kleiner and Belcher found the uncensored manuscript concurred. They translated the line as Petros seeing “some young nuns pressing against each other and being lustful with each other, each with a female companion.”

“This is the earliest anecdote we know of in which African women express desire for other women,” writes Belcher.

The academic also pointed to Walatta Petros’s relationship with her fellow nun Eheta Kristos, describing their first encounter with each other as “rapturous”. The text says that “love was infused into both their hearts, love for one another, and… they were like people who had known each other” their whole lives. Walatta Petros and Kristos “lived together in mutual love, like soul and body. From that day onward the two did not separate, neither in times of tribulation and persecution, nor in those of tranquillity, but only in death”.

“There is no doubt that the two women were involved in a lifelong partnership of deep, romantic friendship,” Belcher writes.

Identifying them as lesbians would be “anachronistic” partly because Walatta Petros was “deeply committed to celibacy”, she told the Guardian.

“Many Ethiopians are quite upset about my comments about the saint, my interpretations of her relationship with Eheta Kristos,” she said. “Part of this upset is due to not understanding my point. I think she was a sincere, celibate nun, but that she also felt desire for other women and that she was in a life-long celibate partnership with Eheta Kristos.”