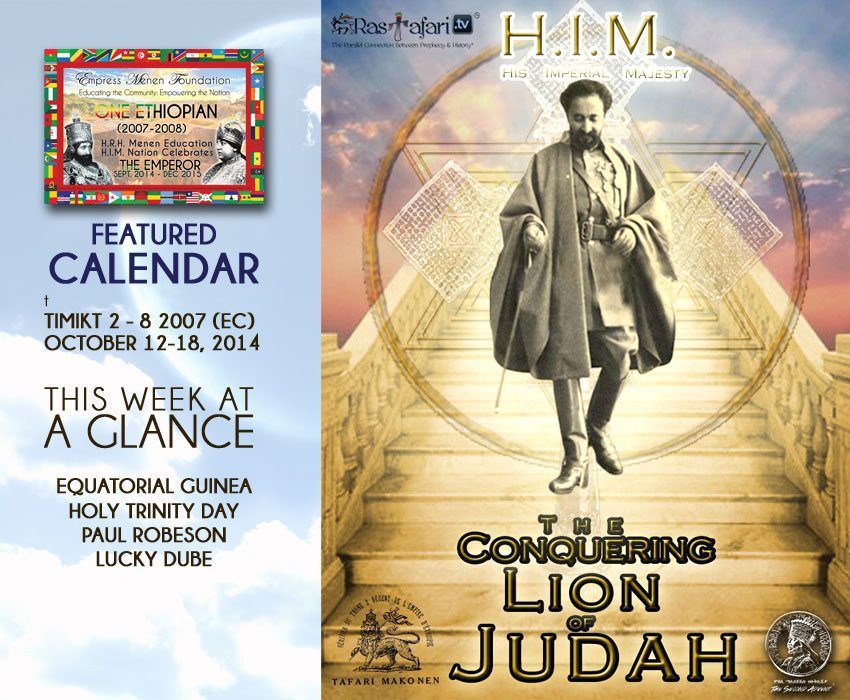 On this day died the holy father Abba Simeon, the fifty-first archbishop of the city of Alexandria.

On this day the new Saint George became a martyr.

On this day also are commemorated Nineveh and its people and its tribes, and Macarius, and Theophilus, and Eumara, and Gregory, bishop of Armenia, and Saint Theodora, the daughter of the Emperor Arcadius, the son of Theodosius the Great.

1898: Edith Sampson was born. She was a lawyer, judge and the first black U.S. delegate appointed to the United Nations. She passed in 1979.

On this day Saint Bacchus and his companion Saint Sergius became martyrs by the hands of the wicked Antiochus, governor of Syria.

On this day Saint Ananias, the preacher, one of the two and seventy disciples, became a martyr.

On this day also are commemorated the righteous saints Romanus, and Gabra Krestos, and John the eunuch, and the consecration of the church of Senhar.

1834: Henry Blair of Greennosa, MD was granted a patent for a corn planting machine.

1964: Dr. Martin Luther King was the youngest man ever to receive the Nobel Peace Prize for combating racial inequality through nonviolence.

1999 – Penn governer signs against Mumia. The governor of Pennsylvania, Thomas Ride, signs the death warrant for Mumia Abu-Jamal. Mumia is charged with the early eighties slaying of a police officer.

On this day died the holy father Abba Paul, Archbishop of Constantinople.

On this day died Saint Cyriacus the martyr and Hannah his mother; now he was condemned to death by Elianus (the Emperor Julian according to the Bodleian ms.) because he was a bishop.

1859 – John Brown was an abolitionist whom took direct action to free slaves by force. HE led a raid on Harpers Ferry, in mid-October in 1859, being convicted of murder, treason and conspiracy. But his way of freeing slaves was the most dramatic way of abolitionist impact, ever seen.

On this day died the holy and righteous woman Hannah, the prophetess – mother of Samuel the prophet.

On this day died Saint Abba Pantaleon of the cell.

On this day also the saints Rewak and Antonius, Bishop of Bana, became martyrs.

On this day also is commemorated Habakkuk the prophet, the interpretation of which name is “Teacher.”

On this day also Saint Dionysius, Bishop of the city of Athens, became a martyr.

On this day also ‘Entona (Antonius), Bishop of the city of Bana, became a martyr.

On this day also is commemorated Enos, the son of Seth, who was the first to call upon God. He lived 190 years and begat Cainan; and all the days of his life were 620 years, and he died at the beginning of the Sabbath.

1859 – John Brown attacked Harpers Ferry, Va., with thirteen white men and five Blacks. Two of the five Blacks were killed, two were captured and one escaped.

1968: U.S. athletes Tommie Smith and John Carlos were suspended from the Olympic Games for holding up their fists in a Black Power salute in Mexico City.

1968: Kingston, Jamaica was rocked by the Rodney Riots, inspired by the barring of Walter Rodney from the country.

1995: The Nation of Islam organizes The Million Man March on Washington, 1995

On this day died the holy father Abba Pawli of the city of Tamaw.

On this day also Minas, and Hasina [and Cyprian, and Justina] became martyrs.

1888 – First Bank For Blacks. The first bank organized for Blacks was the Capital Savings Bank of Washington D.c.

1956: Mae Jemison turns 57 today. She was the 1st black woman to travel in space in 1992. She is a NASA astronaut, physician and college professor.

On this day Saint Metra the old man became a martyr, and many others were martyred with him.

On this day Saint Bacchus and Saint Pelagia became martyrs.

On this day also is commemorated Abba Hor the martyr.

On this day also are commemorated Abba Bula, and Susannah, and her children the martyrs in the city of Semwah, and Saint Agathon the anchorite

1775: Poet Phillis Wheatley was freed from Slavery. She died nine years after being freed at age 31.

1896: The St. Agnes Hospital in Raleigh, NC opened its doors. This was one of the 1st hospitals for blacks in America.

2007: Lucky Dube was fatally shot during an apparent carjacking. He was shot twice by the assailant and crashed after trying to drive away. He was 43 years old.

Art by Ras Nehemya.  Give Thanks!