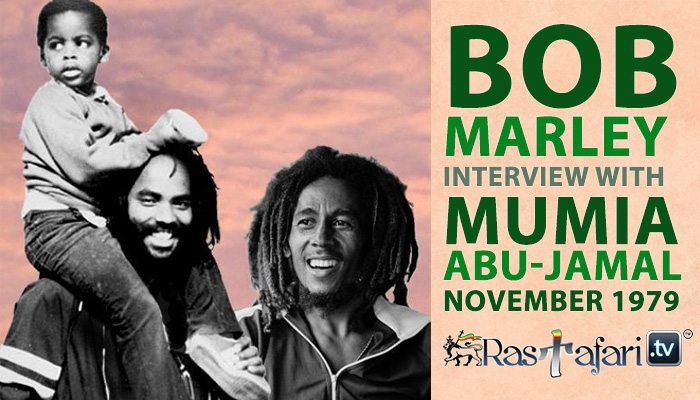 Mumia Abu Jamal interviewed Bob Marley for radio in Philadelphia, November 1979. In November 1979, Bob Marley and the Wailers toured North America in support of the Survival album, an album with an outwardly militant theme that explored issues such as black nationalism, repatriation, and Pan-African solidarity.  According to many sources, Survival was originally to be called Black Survival to underscore the urgency of African unity, but the name was shortened to prevent misinterpretations of the album’s theme.  Marley envisioned the album as the first in a trilogy, followed by Uprising in 1980 and Confrontation in 1983.

The tour started in Boston in the latter part of October 1979, and ended in Libreville, Gabon on January 6, 1980. During 1979, which was the International Year of the Child, the band made appearances at a few benefit concerts for children, as was the case on August 10, 1979, in Jamaica, prior to the Survival Tour, and on December 15, 1979 in Nassau, Bahamas. The tour mainly took place in the United States, but also included performances in the Caribbean and in Africa.

In the early part of the North American leg of the tour, Bob Marley and the Wailers  visited Philadelphia, Pennsylvania where they played The Spectrum on November 7, 1979.  While in Philadelphia, Bob was interviewed by an award-winning local journalist named Mumia Abu-Jamal at the Warwick Hotel.  The interview is presented here.

Abu-Jamal was later convicted of the 1981 murder of Philadelphia police officer Daniel Faulkner and sentenced to death. He has been described as “perhaps the world’s best known death-row inmate”, and his sentence is one of the most debated today.  On December 7, 2011, Philadelphia District Attorney R. Seth Williams announced that prosecutors would no longer seek the death penalty for Abu-Jamal.  Williams said that Abu-Jamal will spend the rest of his life in prison without the possibility of parole.

A written transcript of the interview can be viewed here.

Give thanks to Roger Steffens for checking all historical and factual references.