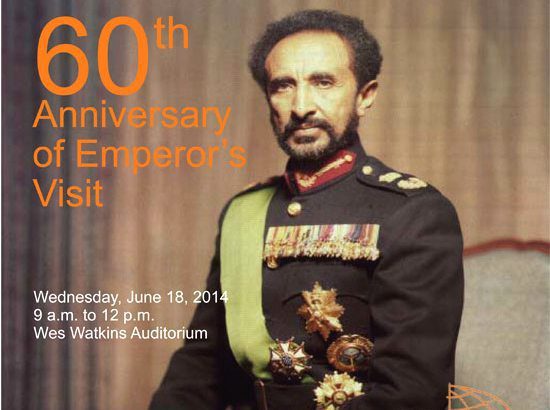 The event will take place at 9 a.m. in the Wes Watkins Auditorium with guest speakers discussing a range of topics including the Emperor’s visit and Ethiopia’s past and current ties with OSU. This will be free to the public, and anyone is welcome to come. Following the presentation, there will be a lunch at 12 p.m. and authenticEthiopian food will be served. A ticket is necessary for the luncheon and the first 50 people to register will receive a free ticket. You may register for tickets at www.iso.okstate.edu.

“On June 18, 1954, Emperor Haile Selassie of Ethiopia, an iconic figure of the 20th century, came to Oklahoma A&M College to personally thank the college and its administration for their work in assisting in modernized agriculture and education in his nation under one of the first Point Four Programs,” said Theodore Vestal, Professor Emeritus of Political Science at OSU.

Vestal will be one of the guest speakers, who will be talking about Emperor Selassie’s visit to Oklahoma, which was also his first state to visit in the United States.

“We are excited about this event, honoring the ties between Ethiopia and Oklahoma State University,” said David Henneberry, Associate Vice-President of International Studies and Outreach. “I hope that this is only the beginning of our continued work with Ethiopia.”

Also scheduled to speak are Barbara Stoecker, Regents Professor and Marilynn Thoma Chair who will discuss her research in Ethiopia; Worede Gebremariam, President of the Ethiopian Student Association; Jack Herron, Government Relations Director for Professional Oklahoma Educators whose parents were involved in the Ethiopia program; Jeremy Bennett, field representative for Congressman Frank Lucas who spent a summer studying abroad in Ethiopia and will talk about his experiences and Mel Tewahade, Director of the Point Four Documentaries.

JAHJAH Foundation’s summer cruise fundraiser was held on Saturday, July 30, 2022.  They invited everyone to come out in your Jamai...
Theme developed by TouchSize - Premium WordPress Themes and Websites