Drive 155 miles south from Addis Ababa, Ethiopia’s capital, and you’ll find yourself in a little patch of Jamaica, where dreadlocked Rasta settlers, many born in the Caribbean, have now made their home. Welcome to the community of Shashemane—Ethiopia’s version of “Amish country.”

You do not have to look far in Africa to see the influence of reggae music. Once I met a Tuareg tribesman in the Sahara Desert who proudly played me a Bob Marley ringtone on his cell phone. Reggae music swept ’round the world in the 1970s, then receded a bit in most places. It still lives large in Africa. There is great reverence for the Jamaican classics, but there are also many lively local scenes. Reggae is music for the dispossessed, and Africa itself plays a leading role in reggae’s narrative. In reggae mythology, Africa is the Promised Land, the destined homeland where the African diaspora will someday be repatriated. Africa—and Ethiopia in particular—is the “Land of Zion” sung about in so many reggae songs. 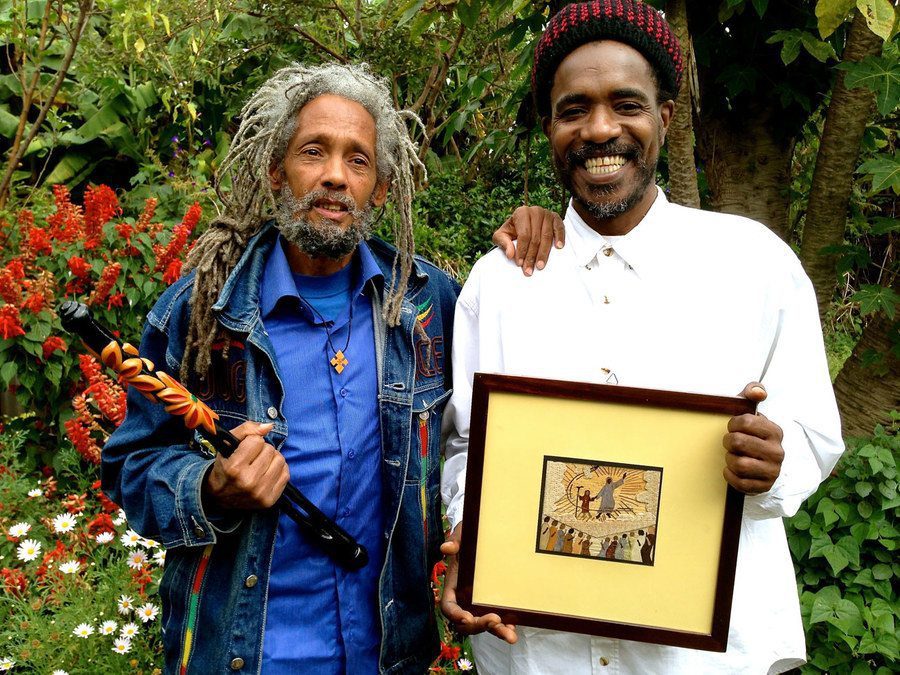 Reggae has its own code and language, infused largely with the ideology of the Rastafarians—followers of a spiritual system that arose in the 1930s in Jamaica. A big influence on the Rastafarians was Marcus Garvey, a Jamaican political leader in the 1920s who led a Back to Africa movement among descendants of slaves throughout the Americas. Rastafarians regard Garvey as a prophet who predicted that one day a black man would be crowned king in Africa and would bring deliverance to dark-skinned people everywhere.

“Follow, follow, follow, follow Marcus Garvey’s footsteps,” sang reggae singer Burning Spear. And where exactly was Garvey going? “We’re leaving Babylon, we’re going to our father’s land,” Bob Marley told us in “Exodus.” Not Babylon, Long Island, mind you, but the metaphorical one where, as Marley sang, “the system is the vampire”—the wicked place that embodies all of what’s wrong with Western culture. Babylon, as Steel Pulse said, “makes the rules . . . where my people suffer.”

When Haile Selassie I was declared emperor of Ethiopia, in 1930, the followers of Garvey believed Garvey’s prophecy had been fulfilled. They declared His Imperial Majesty to be the Messiah, or “Jah.” Selassie’s pre-coronation name, Ras Tafari Makonnen, was adopted to name their movement.
Last November, I had some business in Ethiopia, but I went a couple of days early. We know much about the influence of Ethiopia on the Rastafarians. I was curious to see the impact of the Rastafarian movement on Ethiopia. Rastafarians encourage their followers to pick up and head to Ethiopia, to repatriate. Underneath reggae’s cool backbeat rhythms are endless messages to get thee back to Zion. Billions of dollars worth of that message have been repeated over and over, all around the planet, for the past 40 years. With more than a million Rastafarians in the world now, shouldn’t Ethiopia be teeming with Rastas?Well, “teeming” isn’t quite the word, but there is a thriving community. In 1948, Haile Selassie made a substantial land grant to accommodate, for free, any Caribbean of African descent who wanted to “come home.” A wave of Rastafarian settlers in the late 60s made that community come alive. The land grant was in a village called Shashemane, deep in the beautiful Rift Valley, a six-hour drive south from Addis Ababa, the capital. I got a car and headed down.Ethiopia these days is very much a country on the move. Once synonymous with famine (think Live Aid), it now has one of the fastest-growing economies in Africa. People in the capital told me that the Rasta settlement in Shashemane was today a bit of a tourist attraction for middle-class Ethiopians. Ethiopia has been through a lot of changes in the last 40 years. Haile Selassie and the monarchy were overthrown in a violent communist coup in 1974. That new regime, called the Derg, fell to rebels, in 1991, and then a new federal republic was declared in 1994. Anything connected to Selassie fell out of favor, and Shashemane endured some tough decades. Much of the land grant was reclaimed. Still, hardcore settlers hung on, and although the number of new arrivals diminished, immigration continued. I wondered if this Jamaican outpost had now become some sort of dreadlocked attraction for day-tripping sightseers—the African equivalent of Amish country.

The road south out of Addis was initially rough and congested with belching Chinese dump trucks, but it soon opened up to a clear new highway. Traffic thinned to mostly just donkey carts, the occasional cattle herd, and the constant stream of pedestrians you see on African roads. It was a stunning drive and got better as we went along. The sky was clear blue, expansive, and dotted with striking cumulus-cloud formations. We drove on past beautiful lakes. The scenery got progressively more verdant, almost tropical. A few miles outside of Shashemane, I saw a sign with Bob Marley’s image and the red, yellow, and green Rasta colors.
Shashemane’s main drag is a major highway lined on both sides with rickety wooden stalls selling Rasta gear and drinks. Scooter taxis, with dreadlocked drivers, were parked at all angles. There is a small museum, signs for lodges and juice restaurants, and various temples for worship. A few aggressive hawkers aside, it seemed to be a friendly and happy place. People smiled, warmly greeting “brothers and sisters” with back-and-forth salutations in the unmistakable Jamaican patois. There were no throngs of Rastas or tourists, though. The vibe was very quiet, very small town. The real action seemed to be on the many dirt lanes that run off into the jungle.

I had arranged to meet some of the community’s “elders” and also with a reggae musician, Sydney Salmon. “Like the fish,” he says,” but they call me Solomon here.” Born in Jamaica, he migrated to New York, studied music, played with many notable reggae artists, including Beres Hammond, became a Rasta, and then, in 2000, released a single, “Shashemane on My Mind.” It must indeed have been on his mind, because he soon packed up and moved here, marrying an Ethiopian woman, and forming the Imperial Majestic Band. He has become a bit of a star in Ethiopia. Thirteen years on, “a newcomer,” he does not see himself going back.

I met one of the Shashemane’s latter-day pioneers, Maurice Lee, in a local juice bar. (Rastas to not drink alcohol, and, for the most part, are also vegetarian.) Lee is a burly 62-year-old man with gray dreads tucked under a knit Rasta cap. He had arrived from Jamaica, in 1976, with a “brother.” Many of the original settlers had left by then, and building out the community was difficult. But he said that these had been “the best 37 years” of his life. To survive as a Rasta in Shashemane, one must live with great ingenuity. Ras Hailu Tefari, a gentle, handsome 60-something Rasta from St. Vincent, runs the Banana Art Gallery. It is surrounded by a lush tropical garden, and sells remarkable pieces made by gluing together banana leaves of different colors—“the world’s only banana-leaf art gallery,” according to Tefari. Alex and Sandrine, a Rasta couple, new arrivals via Paris and Martinique, opened the Zion Train Lodge with 16 colorful bamboo huts for the growing tourist trade. Its brochure invites you to “return to the source, and come and share the positive vibration.” Alex, a kindly man with a perfectly dreadlocked beard, pointed out a blissful lineup of Japanese Rasta guests sitting silently on the lobby porch. Shashemane, he said, had become an iconic place of “pilgrimage” and curiosity for Rastas everywhere, but admitted that most of his customers are Ethiopians.
It was evident that the Exodus, the “movement of Jah people,” as Bob Marley put it, never really came to pass in Zion, despite all that singing and proselytizing. Best estimates put the Rasta settler population in the 400 to 700 range, down from a peak of more than 1,000 before 1974, and there are few new arrivals. Reasons for this run the gamut, from the fear that “lions are eating people there” to cost, but the main problem is the Ethiopian government. No “repatriates” have ever been granted citizenship or even an identity card. You can sense a feeling among the settlers that they did not get the welcome home they thought they deserved. They came, however, to create a perfect spiritual community, not to fit into Ethiopian society. Therein lies the rub. They have never really assimilated, and have a complex relationship with the “outside,” made more complex by religious and language differences. In that regard, the Amish parallel holds up.

For all the difficulties, though, the Rastas who came and stayed seem happy with their choice. They have built a very tight-knit, peaceful, and spiritual community, albeit with a few rough touts trying to peddle ganja. Their land is rich, they live in natural beauty, and the people look healthy and satisfied. They have a school and even a Web site (shashamane.org). As for ganja, that Rastafarian staple, although it is illegal in Ethiopia, it seems to be quietly tolerated in Shashemane. One Rasta told me, “It’s a holy sacrament. We use ganja instead of wine, but we are not arrogant about it and do not want to provoke the system.”

For all the drum-beating and religious and musical encouragement—for all the exhortations about Marcus Garvey and Haile Selassie—the Back to Africa movement never really happened. If they are going anywhere, most descendants of African slaves are not “going home.” Even Bob Marley, the most famous Rastafarian of all, did not do it, though he visited Shashemane in 1978. (His wife, Rita, wanted to transfer his body to Ethiopia, his fatherland, but his grave remains in Jamaica.) More than a million people have emigrated to the United States from the Caribbean, in contrast to the few thousand that ever made it to Ethiopia. But the settlers of Shashemane seem to have few regrets. Desmond Martin, an old-timer Rastafarian who came in 1975 from Kingston, told me, “I escaped from Babylon. It was difficult, but I’m never going back.”

In 2021, over 360,000 people left California in what many are calling The California Exodus. But a rising number of them are migra...
Theme developed by TouchSize - Premium WordPress Themes and Websites