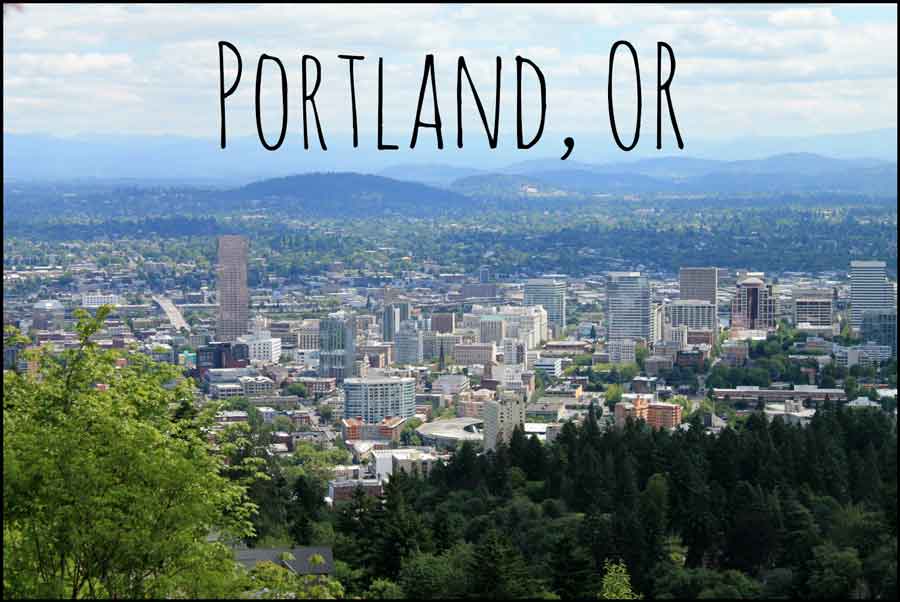 Currently, I call Portland Oregon home but in truth, it’s hard to call it a comfortable home. This place seems to have a reputation for being liberal. But the only liberal part here is the promotion of gender confusion and homosexuality. We have more “strip clubs” than any other state I’ve ever seen. Immorality is seemingly the theme. People of color face a constant side eye and criticism of white population. And although the natural beauty is a huge draw for people, most of the communities are not.

There have been a couple of recent fires at black-owned businesses in town that the police refuse to look into further so gofundme has become the tool to rebuild in my community because there seemingly is no justice. Most people of color, mainly black, were forced out of North Portland. Many of the ones who stayed now reside in the Albina district which holds a terrific community event called “Good in the Hood.” However this year one of the multiple threats organizers received was a half-literate hate letter suggesting that this year’s event would be a “bloodbath.”

We have seen an influx of alt-right white supremacists and militias descend on Portland and the surrounding areas for rallies, possibly for recruitment. One such person from a militia in Texas was photographed assisting a Portland police officer in an arrest that appeared to only need the one person during an alt-right rally and its opposing protest. The same very Portland police that shot and killed 17-year-old Quanice Hayes with an AR-15 while on his knees. Specifically, officer Hearst, playing the part of judge, jury, and executioner, claimed he knew that Hayes had a gun despite never seeing one. After Quanice Hayes was shot police produced a toy airsoft gun from a garden bed feet from his body. Months later a white supremacist murders two people and stabs another on the max train. When Portland police find him he is armed with a knife and yelling at them to shoot him. He was taken alive. Meanwhile just a little north in Seattle the police murdered a black mother at home in front of her children.

This on-going problem has a solution. But few are chosen and I overstand that Exodus from Babylon and repatriation may not be for everyone. So if you must stay in Babylon you can still make things better. You can use these simple steps to help. Always speak out about injustice and oppression. Spend your money wisely. By spending at locally owned and African owned businesses, you can make sure that your money supports the community rather than large companies and greedy corporations. Be self-sufficient. Grow your own garden, make your own food, health, and cleaning products, and do your own repairs. Donate time and money to groups that fight injustice locally within your community. Educate others. It is our duty to stop lies and slander in our presence as they create an environment for poisonous thinking. The system itself creates discontent with its confusion so above all else carry love with you always. It will cut through the negativity that you may find yourself in the presence of.

The following is an article by DeNeen L. Brown of the Washington Post.

In 1844, all black people were ordered to get out of Oregon Country, the expansive territory under American rule that stretched from the Pacific coast to the Rocky Mountains.

Those who refused to leave could be severely whipped, the provisional government law declared, by “not less than twenty or more than thirty-nine stripes” to be repeated every six months until they left.

Oregon Country’s provisional government, which was led by Peter Burnett, a former slave holder who came west from Missouri by wagon train, passed the law in 1844 — 15 years before Oregon became a state. The law allowed slaveholders to keep their slaves for a maximum of three years. After the grace period, all black people — those considered freed or enslaved — were required to leave Oregon Country. Black women were given three years to get out; black men were required to leave in two.

The “Lash Law” was quickly amended and then repealed. No black people were ever lashed under the law.

But the act would become the first of three “exclusion laws” that shaped the Pacific Northwest, banning any additional black people from coming to Oregon Country. Those laws created what one African American professor calls “a very hostile environment” that has long made Oregon and its largest city, Portland a stronghold for white supremacists like Jeremy Christian, the man accused of  killing two men and severely wounding another on a light-rail train last month.

Few people are aware of Oregon’s history of blatant Racism, including its refusal to ratify the 14th and 15th Amendments of the Constitution.

In 1848, the territorial government passed a law making it illegal for any “Negro or Mullatto” to live in Oregon Country. In 1850, under the Oregon Donation Land Act, “whites and half breed Indians” were granted 650 acres of land from the government. But any other person of color was excluded from claiming land in Oregon. In 1851, Jacob Vanderpool, the black owner of a saloon, restaurant and boarding home, was actually expelled from Oregon territory.

“The exclusion laws were primarily intended to prevent blacks from settling in Oregon, not to kick out those who were already here,” according to Salem Public Library records. But Vanderpool’s neighbor “reported him for the crime of being black in Oregon, and Judge Thomas Nelson gave him thirty days to leave the territory.”

In 1857, as Oregon sought to become a state, it wrote the exclusion of blacks into its constitution: “No free negro or mulatto, not residing in this State at the time of the adoption of this constitution, shall ever come, reside, or be within this State, or hold any real estate, or make any contract, or maintain any suit therein; and the Legislative Assembly shall provide by penal laws for the removal by public officers of all such free negroes and mulattoes, and for their effectual exclusion from the State, and for the punishment of persons who shall bring them into the State, or employ or harbor them therein.”

When Oregon entered the Union in 1859 — it did so as a “whites-only” state. The original state constitution banned slavery, but also excluded nonwhites from living there.

“Oregon is the only state in the United States that actually began as literally whites-only,” said Winston Grady-Willis, director of Portland State University’s School of Gender, Race and Nations. “Even though there was subsequent legislation that challenged those statutes, the statutes were not removed from the books until 1922.”

Grady-Willis added: “It’s really important for folks to understand this notion of Oregon as this lily-white state sets the tone and is important structurally for the remainder of history of not only the state, but cities like Portland as well.”

Portland’s reputation as a progressive city is largely a myth, he said. Portland remains the whitest, large city in United States. According to a July 2015 Census report, the city of 612,206  people, was 77.6 percent white; and 5.8 percent black. Grady-Willis called it “a key  site for Klan activity.”

This is the historical backdrop for the charges against Christian, 35, who allegedly verbally abused two women on the train,  including one wearing a hijab, and then attacked the men who came to their aid.

During a brief court hearing Tuesday, Christian was unapologetic:

“You call it terrorism,” Christian said in court. “I call it patriotism.”

Karen Gibson,  associate professor in Portland State’s Toulan School of Urban Studies and Planning, said Oregon rescinded its initial ratification of the 14th Amendment to the U.S. Constitution, which granted citizenship to “all persons born or naturalized in the United States,” including former slaves.

Oregon was one of just six states that refused to ratify the 15th Amendment, which gave black men the right to vote.

“Many of the white settlers who came here came for the Oregon Land Donation Act. This place was intentionally settled by whites for whites,” Gibson said.

“They did not want slavery here. They didn’t want land taken over by large plantations so they didn’t have to compete with bonded labor. But they also thought blacks were inferior. That is still here. White supremacy is about that: the beliefs that whites were supreme.”

Millner said Oregon became a place where “many practices we associate with the Jim Crow South were legal here.” In the 1920s, Oregon had the largest Ku Klux Klan organization west of the Mississippi River. In 1922, Walter Pierce, a member of the Ku Klux Klan, was elected governor of Oregon. Pierce served as a member of the U.S. House of Representatives from 1932 to 1942.

Oregon’s hostility toward blacks remains part of the state’s culture.

“In the 1980s and ’90s, Oregon became a destination for the largest skinhead movement in the country,” Millner said. “Their objective was to achieve something pioneers tried to achieve here and that was to create a white homeland.”

Millner said that in the 1980s and 1990s, “in Oregon and especially in Portland, it was very dangerous to be a person of color.

An infamous racial attack occurred in Portland in 1988, when an Ethiopian immigrant was fatally beaten by three white supremacists skinheads on the streets of Portland. Mulugeta Seraw was a student at Portland State University. He was killed by three white supremacists who were members of the White Aryan Resistance who beat him with a baseball bat.In 1990, the Southern Poverty Law Center and the Anti-Defamation League won a lawsuit against the White Aryan Resistance on behalf of Seraw’s family.

Millner said he has lived in Oregon 47 years. When he heard about the stabbings on the train last month he said he was disturbed but not surprised.

Face masks will no longer be mandatory in public places and Covid-19 passports will be dropped for large events as infections leve...
Theme developed by TouchSize - Premium WordPress Themes and Websites