The Solar Revolution In Africa

When the Sun goes down in many villages across Benin, Burkina Faso and Mali, most activities cease. Shops close, business stops for the day, and children are forced to do their homework by the light of polluting and hazardous kerosene lamps or candles.

Rural connection to the national power grid in these countries is expensive and a logistical minefield.

But there is a realistic solution, which some remote communities are beginning to embrace: solar power. Benin, Burkina Faso and Mali are ideally suited to solar photovoltaic power: every year, they receive up to 3,000 hours of intense sunlight, which could be harnessed to provide much-needed energy to isolated communities.

Since 2009, when the project launched, much has changed. The villages now have solar-powered lights and cookers, can charge their mobile telephones and even watch television on their communal set.

In Hon and Koussoukpa, Benin, 308 of around 1,000 households are now solar-powered. In Sirakorola, in southwestern Mali, the administrative headquarters, school, town hall and mosque are powered by solar energy. And so is the village’s health centre, which is equipped with a refrigerator, freezer and solar water heaters. Solar street lights illuminate the marketplace and the villagers have solar-powered cookers, units for keeping milk cool and facilities for charging batteries.

Since we had solar energy in the village, my business has been more successful. Before, when the darkness set in, I closed my shop. But now I sell late into the night and my business has grown.”

“Life now goes on well beyond nightfall and children can read and revise for their lessons for longer periods,” says Rosalie Congo, country coordinator of the Global Environment Fund. At Boala in the north of the country, household breadwinners say they are spending less on kerosene and torch batteries.

These solar electrification projects are mostly funded by the UNDP, but community donations are also a key component: most of the population pay small, voluntary subscriptions, which has the added benefit of boosting community involvement and ownership of the projects.

In Sirakorola, for example, villagers contributed ten per cent of the total production costs, which are estimated at 34 million CFA francs (around US$70,000). People also contribute towards the costs of maintenance and infrastructure renewal. In participating communities, each beneficiary family pays a monthly fee for the technical maintenance of solar installations. In Burkina Faso’s solar villages, for example, the amount per family is US$10.

These solar electrification projects are mostly funded by the UNDP, but community donations are also a key component: most of the population pay small, voluntary subscriptions, which has the added benefit of boosting community involvement and ownership of the projects.

In Sirakorola, for example, villagers contributed ten per cent of the total production costs, which are estimated at 34 million CFA francs (around US$70,000). People also contribute towards the costs of maintenance and infrastructure renewal. In participating communities, each beneficiary family pays a monthly fee for the technical maintenance of solar installations. In Burkina Faso’s solar villages, for example, the amount per family is US$10. 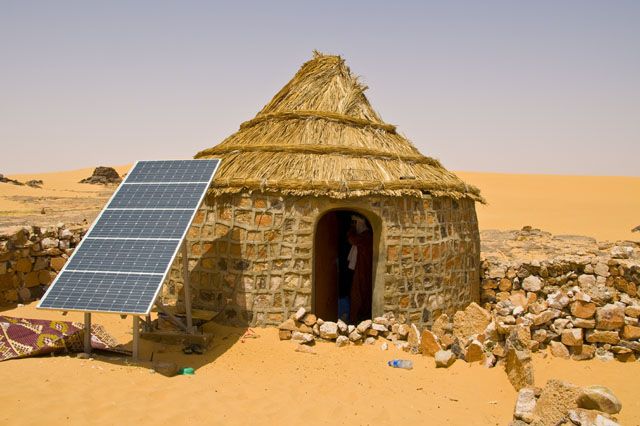 Prior to the implementation phase of the project in Burkina Faso, for example, six illiterate rural women aged between 40 and 50 were selected from across the country and sent to the Barefoot College in New Delhi, India, for six months hands-on training on solar energy systems installation, maintenance and network expansion. “The women, all mothers, were selected by their various communities in a democratic manner and basically on the basis of their contribution to the growth of their communities,” explains Congo.

Upon completion of the course, each of the women returned home to install solar power units that are now supplying electricity to some 100 homes in each of the six villages. They are now qualified solar engineers and work almost full time in electronic workshops built for the participating villages. They are tasked with maintaining the units and they get ten per cent of the monthly 5,000 CFA francs [about US$10] paid by every household connected to the supply grid as a monthly fee. In addition, each of the newly trained engineers must train another woman from their community as their assistant.

The UNDP says that in Mali, with 99 per cent of rural communities off the national electricity grid, the advent of solar power is encouraging economic activities. Women are watering their small-scale vegetable farms with solar-powered pumps and saving on money they would have spent buying kerosene and charcoal.

Nana Sangaré, deputy mayor and chair of a women’s association in Sirakorola situated some 120 kilometres from the capital Bamako says she now comfortably provides for her seven children’s needs from increased income she makes from selling vegetables and locally made yoghurt.

In Benin, Burkina Faso and Mali, the UNDP provides the bulk of financial support for the projects with the rest coming from the various country governments and community contributions.

The technical problems that face communities using solar power include the delay in the delivery of some replacement parts and equipment; which can leave the public places or families without light for months.

“If we have a mechanical breakdown,” says Sangaré, “we don’t need to go all the way to Bamako to find a technician anymore. In fact, we have our own spare parts stores. In Burkina Faso, village spare parts supply shops and maintenance workshops set up as part of the project are mostly run by women.

When revenues fail to cover the costs of maintenance and spare parts, communities turn to the government or NGOs to help them. Sometimes, local authorities step in to fix technical problems.

Greeted with joy by the villagers, the introduction of solar energy has given rise to popular festivals of culture and art.

Seydou Coulibaly, a shopkeeper in Sirakorola’s market, explains: “Since we had solar energy in the village, my business has been more successful. Before, when the darkness set in, I closed my shop. But now I sell late into the night and my business has grown.”

And Buchi Sane, a Sirakorola vegetable seller, says: “With the electricity, I keep my products refrigerated and I sell them the next day. But before, I just threw the spoiled ones away unsold and suffered much loss. The electricity has helped me to improve my income.” Sane is now even considering going further afield to sell her products.

At the solar power project launch in Burkina Faso’s northern region, Khalil Boukari Bara, the regional governor, said: “The electrification of these areas provides benefits, and access to modern opportunities, production and marketing. It contributes to job creation, and the determination of young people to stay on their land and fight against poverty.”

For Rudolph Attédé, an electronics engineer specialising in renewable energy in Benin’s economic capital, Cotonou, solar energy’s advantages for rural communities are well established. “Firstly, the material is not too expensive, requires no major maintenance and the average lifetime of a PV [photovoltaic] module is 20 years. The only difficulty is the management of end-of-life materials that are hazardous waste,” he says.

There are plans afoot to roll out the project to other parts of Benin, but the UNDP warns that there must be clear signs of feasibility. To ensure sustainability at la Boucle du Mouhoun community in southwest Burkina Faso, for example, villagers have set up a seven-member management committee that include four women to manage subscriptions and maintenance spending. The example has been replicated in all the country’s six beneficiary communities, with the goal of using generated profit to purchase more material for network extension.