PARIS — AT dinner last summer with my brother-in-law, a grandson of Jews who fled Algeria for France, the conversation turned to the rash of anti-Semitic incidents plaguing the country. At such times, the question inevitably arises in the minds of many Jews: “Where could we go?” He mentioned Tel Aviv, London and New York, but the location mattered less than the reassurance that departure remained an option. He’s not alone in this thinking: 7,000 French Jews emigrated in 2014. 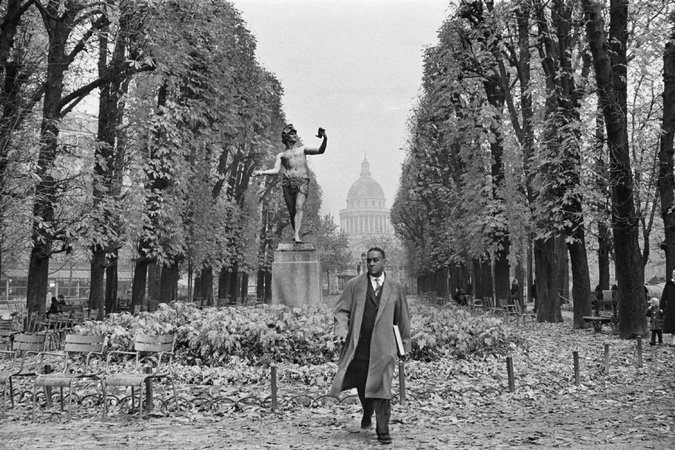 The American author Richard Wright at the Jardin du Luxembourg in Paris in 1958.

Over the past year, as I watched with outrage at the dizzying spate of unpunished extrajudicial police killings of black men and women across America, I’ve wondered why more black Americans don’t think similarly. Why shouldn’t more of us weigh expatriation, even if only temporary, as a viable means of securing those lofty yet elusive ideals of life, liberty and the pursuit of happiness?

Blacks leaving America in search of equality is not new. The practice dates from at least antebellum Louisiana, when free mulattoes in New Orleans sent their children to France to live in accordance with their means and not their color. It continued after World War II, when a number of black G.I.s, artists and jazzmen shared Richard Wright’s sentiment that there is “more freedom in one square block of Paris than there is in the entire United States of America.”

Today, that might sound hyperbolic — enormous gains have been made in America at every social level, and many blacks live as well as one can reasonably hope to anywhere. Yet we are consistently reminded of how tenuous this progress can be; how possible it still is to be humiliated on the front porch or cut down in Walmart by an officer who will never be held to account.

Watching what happened in Ferguson, Mo., and Staten Island and knowing that blacks are 21 times more likely than whites to be shot by the police constitute a heavy psychological tax. Freedom — and more broadly speaking, basic well-being — are relative goods. I lament that Paris can be a threatening space for Jews, Roma, Africans and Arabs, but the truth is, as a black American, I’ve never felt safer or less harassed anywhere. It’s difficult to exaggerate the existential boon of shedding one’s victimhood.

Of course there is no black Zion with a head of state urging the diaspora to return. But there have been movements for mass migration before, most notably Marcus Garvey’s early 20th-century Universal Negro Improvement Association, and its quixotic mission — based on the position that America would never grant blacks a fair shake — to forge a global black economy and create settlements for Americans in Africa by transporting blacks back to Africa by ship. W.E.B. Du Bois, a global citizen who was educated at the University of Berlin and later went into exile in Ghana, argued that Garvey’s plan to “unite Negrodom by a line of steamships was a brilliant suggestion and Garvey’s only original contribution to the race problem.” Garvey’s Black Star Line collapsed in 1921. It was a business catastrophe that swallowed many families’ savings, but it remains a potent symbol of exodus.

A realistic program of black expatriation today would start with appreciating the huge potential of cheap flights and Internet hyperconnectivity. And it would be tempered by a healthy skepticism toward the idea of finding utopia anywhere. It would focus instead on the strength and adaptability of individuals and the social networks they can create by integrating into societies that allow black expats the status — still too often denied in America — of being treated first and foremost as Americans and not as blacks.

Consider my friend Gerard from Queens. As with many black Americans, European vacations weren’t part of his upbringing. Last year, he left New York for a new job in London. When I called him to compare impressions of life abroad, he confessed, “The race situation back home occupies so much space in your mind, even just safety-wise, I actually never fully understood what it meant to be American, and all the advantages that come with it, until now.” There are subtler satisfactions, too: “You immediately remove that affirmative action target from your back. A work visa gives you the validation that you’re good at what you do.”

Certainly not everyone can just pick up and go, nor is expatriation a panacea for all that afflicts black America. But at a time when middle-class blacks remain unemployed at twice the rate of whites, and black college graduates have the same chance of being hired as high school-educated whites, the economic case for staying put is not airtight.

One solution would be to increase applications by black students to foreign undergraduate and graduate programs. Years ago, I worked briefly as a consultant for Sciences-Po, one of Paris’s famed grandes écoles, encouraging American high school students and their parents to pursue an English-language education abroad. Sciences-Po was an attractive offer for anyone — a world-class degree and alumni network for less than $2,500 a year. It should have been particularly appealing to blacks since, as Bloomberg recently reported, blacks rely far more on student loans and are less likely to pay off debts after graduation. Studying abroad would sharply decrease this burden (my alma mater, Georgetown, now costs a staggering $65,000 a year), and also provide an entree into expansive new job — and marriage — markets, too.

Yet it’s a strategy that is severely underused. I don’t think I convinced a single black student to attend Sciences-Po. And even though 15 percent of American postsecondary students are black, we account for only about 5 percent of those who study abroad. This is a shame.

Many blacks dismiss expatriation as a luxury reserved for those with economic and social capital. But if “black lives matter” genuinely, then we must recognize minority individuality: Black people should pursue their own opportunities for the good life wherever they can. Yes, we hold an intrinsic stake in America and shouldn’t abandon lightly a homeland that is ours by right of birth and by dint of blood, sweat and hard labor. But if this stake remains unrecognized or unredeemable, its value is dubious.

A couple of years ago, leaving a restaurant near the Louvre, I held the door for a black man in a camel overcoat. Only as he passed did I realize it was the rapper Kanye West. Whatever one thinks of him, Mr. West has become the most prominent black American man to pursue his interests outside of America — a valuable model of blackness untethered to geography. What struck me most that night was precisely how much his demeanor resembled that of a college student on study abroad — still thrilled by the heady mix of anonymity and authority over his own identity that James Baldwin once called “the sanction, if one can accept it, to become oneself.”