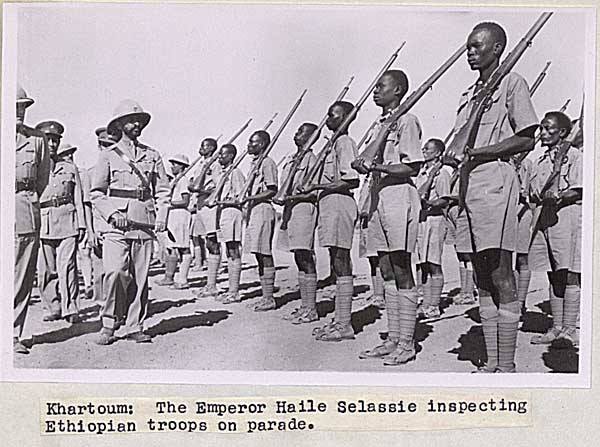 TEACHINGS OF HIS IMPERIAL MAJESTY… Call to Arms

Psalm 2:2 The kings of the earth take their stand, and the rulers conspire together against the LORD and His Anointed One:”

Fighting Men of Ethiopia! Do not lament or lose hope when you see a respected and beloved leader fall in the battlefield, for the cause of Our freedom. Instead, you must realize that anyone who dies for his country is indeed fortunate. Death comes to all whether in time of peace or war and takes those it chooses. It is better to die with freedom than without it. Our forefathers preserved Our country’s independence through the sacrifice of their lives. Let them be your inspiration! Soldiers! Businessmen! Farmers! Young and old, men and women! Unite! Together fight for the defence of your country! As it has always been in our tradition, women too must rise to defend their country by encouraging the soldiers and nursing the wounded. No matter how hard Italy tries to disunite us, Christians or Moslems, everyone will stand united. God is Our fortress and Our defense. Never let the aggressor’s new weapons detract you from fighting for the defense of your country and noble ideals! Your Emperor who speaks to you now will also be amidst you at that time and is ready to shed his blood for the freedom of his country. Before We conclude, there is one point We would like to tell you and this is the fact that we will continue to do everything possible to maintain peace.

We would also like to tell you that until now the Ethiopian Government has done everything possible towards that end. Diplomatically, it has continued to search for peaceful ways of negotiation that would be honorable to both sides. It has asked the League of Nations twice so that Italy could respect the friendship and mediation treaty it entered into of its own accord. Moreover, since both Italy and Ethiopia, along with other states, have signed a treaty abolishing war, and America is the founder of the treaty, We have recently notified this situation to the American Government. And recently, because the Italians created problems at the mediation talks going on in Holland, We have ordered Our minister in Paris to refer the case to the League of Nations, for the third time. We will exert every effort to maintain peace until the end. But if Our efforts and good wishes do not bear fruit, Our conscience will not blame Us. The people of Ethiopia, while strongly united to defend the right cause and freedom of Ethiopia, will raise their hands and pray unto the Almighty God that He may grant strength to their patriots and fighting men.  July 11, 1934

Meskel, one of the major Ethiopian Orthodox festivals is celebrated for two days beginning September 26th. Legend has it that in t...
Theme developed by TouchSize - Premium WordPress Themes and Websites
%d bloggers like this: