Washington| The Supreme Court of the United States has granted to the Georgian slave descendant, Abraham Brown, “40 acres of land and a mule”, in an historical decision that could affect thousand of African Americans.

The 61-year old man filed a lawsuit against the federal government in 2011, accusing the United States of violating their obligations to his ancestor, who died in 1891. His great-grandfather, Elijah Brown, along with 18,000 other freed slaves who had fought for the Union in the American Civil War, had been promised “40 acres of land and a mule” by the U.S. army in 1865, but never received anything. 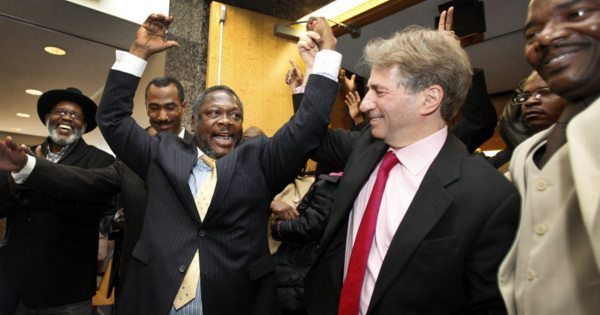 By a narrow 5-4 vote, the Supreme court ruled that the U.S. government had to hold the promises made to these 18,000 freed slaves, by granting the promised acreage and animals to their descendants.

“This is the best day of my life,” Mr. Brown told reporters as he left the courtroom. “Justice has finally been done, after all these years. My great-grandfather can finally rest in peace!”

The Supreme court decision is based on military orders issued during the American Civil War. The orders dealing specifically with the freed slaves are called Special Field Orders, No. 15, and were issued by General William Tecumseh Sherman, commander of the Military Division of the Mississippi of the United States Army, on January 16, 1865.

They provided for the confiscation of 400,000 acres (1,600 km2) of land along the Atlantic coast of South Carolina, Georgia, and Florida and the dividing of it into parcels of not more than 40 acres (0.16 km2), on which were to be settled approximately 18,000 freed slave families and other Blacks then living in the area.

For the duration of the civil war, military officers had both special executive and legislative powers, and therefore, the Supreme Court judged that General Sherman’s field orders have the same legal status as laws issued by the Congress, and have to be respected by the American government.

The decision of the Supreme court could have some major consequences, as it implies that the descendants of the 18,000 other free slave families covered by the 1865 field order.

The NAACP, who supported M. Brown throughout all the court procedures, saluted the decision of the Supreme Court.

“Finally, the American government has decided the hold the promises it made long ago to the African American people,” said Reverend Charles White. “This is far from compensating for all the wrongs that have been done to us, but it’s certainly a step in the right direction.”

The NAACP leader also called for a class action lawsuit, noting that more than 120,000 Americans are direct descendants of these slaves.