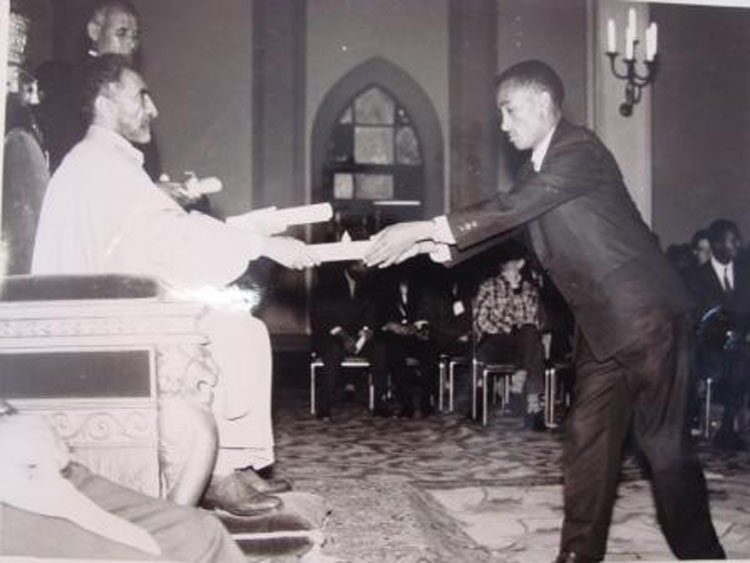 One of the Emperor’s fondest dreams came true on December 16, 1961, when he convoked the HaileSelassieFirstUniversity in the presence of representatives from many world-renown Universities. It was an occasion of pardonable pride for he had sown the seed and nurtured the plant that on that day blossomed into full maturity. Prior to this event, to fill the gap hundreds of Ethiopians were sent to institutions of higher learning abroad, a project that began in the earliest years of his accession to the throne.

In the speeches that follow, His Majesty the Emperor deals with the many stages of this development and sets forth the hopes and aspirations of Higher Education in the country.

….In the field of education, We take great plea-sure in the fact that the opening of Ethiopia’s first University is near at hand. Henceforth, students who have demonstrated their capacity and ability will no longer leave their homeland to pursue higher education. The University’s faculty is being recruit-ed and its physical plant is being established. We Ourself have presented Our Guennete Leul Palace and its grounds, inherited from Our beloved father, as a free gift to the nation, to serve as the nucleus of the University’s physical facilities, and a formal ceremony for the handing over of the Palace will be held in the near future …..

The population of Our Capital, Addis Ababa, have expressed through their Mayor, their desire to erect a monu-ment to Our honour, that they on their own initiative, have started raising funds, and have requested that We lay the foundation stone of this memorial today.

It has also been confirmed that the whole people of Ethiopia have joined hands with the people of Addis Ababa in this effort.

As was indicated on the occasion of Our Birthday Anniversary on July 23rd last, We shall now make known to you Our intentions in reference to this monument.

We wish first of all to state that Our heart was touched with Our beloved people’s desire to erect in Our honour a statue in recognition of services which We have rendered to them and to Our country. There can be no better way for a people to show their deep gratitude to their Sovereign.

By what means can man’s achievements in this world be best remembered? Many people believe that this could be done by the erection of physical and material structures; others believe that their works are in themselves lasting monuments. We, for Our part, think that man’s contribu-tions which live to influence the life and progress of posterity, are the most permanent monuments that can ever be erected.

It is now 32 years since We assumed the high service of aiding and guiding the destinies of Our people, counting from Our Regency, when We were destined to the Imperial Throne of Ethiopia. During this period of Our Reign, a series of problems and trials have had to be faced.

There can be no better testimony to the recognition of Our devotion to the cause of Our country and to the welfare of Our people, entrusted to Our care, from the day when We were chosen with the Grace of Almighty God the anointed Emperor of Ethiopia, than this expression of noble sentiments from Our beloved and loyal people.

We have abiding faith that the Almighty, Who has vouchsafed Us the privilege to reach this present stage, will grant to Ethiopia a bright future and an enduring destiny.

Now, when Our people are willing to erect a statue in Our image, We feel it a duty on Our part to consider what would be the most appropriate means of incorporating in a concrete and lasting manner the sentiments of Our people.

University: A Symbol of Mutual Gratitude

Any monument to be left for Our people, to be perma-nent, must be erected upon spiritual foundations. It is widely known that during Our reign, We spared no effort to promote and extend education and to cultivate the spirit and mind of Our people.

It is Our sincere wish to intimately connect the statue Our people intend to erect in Our image and in Our honour with a living monument in remembrance of Our people’s goodwill, which will go down in history from generation to generation linking together perennially the affection of a people to its Sovereign.

Our beloved people, in contemplating the erection of a monument in Our honour, and We, on Our part, to express Our satisfaction and recognize this gratitude, have decided that on this same spot, where Our people have resolved to build with the funds voluntarily subscribed a statue to Us, that a University be erected and established for the education of Ethiopia’s youth so as to allow them and future generations to benefit from this happy event.

While giving this site for the building and establishment of a University to represent at the same time a monument to your Emperor, for the service and the benefit of your children and the future generations and to stand as a symbol of mutual gratitude between your Sovereign and His people, We now lay the foundation stone of the University.

The salvation of Our country, Ethiopia, as We have repeatedly stated to you, lies primarily in education. As Ethiopia is one, all Ethiopians are also one, and educa-tion is the only way to maintain this condition.