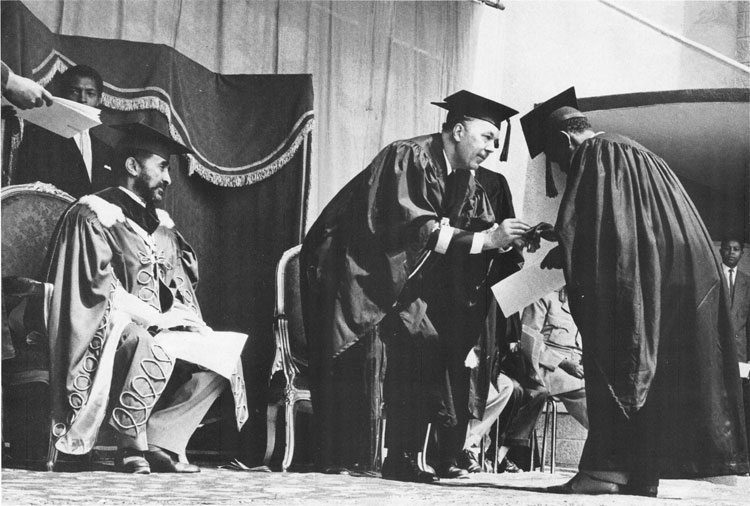 ….. From the beginnings of recorded history, right up to the Middle Ages, and even as late as the beginning of the Industrial Age in which we live, agriculture has always constituted the funda-mental source of wealth for the human race ….. It gives Us great pleasure to be present here to inaug-urate the College of Agriculture and Mechanical Arts, an occasion which marks a great and far-reaching advance in Our programme for the promotion of agricultural education. This institution will serve as a source of inspiration in carrying out the agricultural programme which We have laid down for the future. In establishing this College for the development of the natural wealth of Our country, agriculture and animal husbandry, on modern and scientific lines, Our main purpose has not been merely to develop and utilize these basic resources to supply the daily needs of Our people, but, in addition, to produce a surplus to be shared with other countries of the world. Ethiopia, to some degree, has done this in the past. For example, when the world was sorely distressed by lack of food immediately after the Second World War, Our country, although she herself had for five long years been struggling to recover from the terrible damage inflicted upon her during the war, was yet able to perform a significant service in supplying foodstuffs to the countries of the Middle East. And We have been pleased to observe how, since then, Our people have increasingly devoted themselves to improving the agriculture of Our country. A country and a people that become self-sufficient by the development of agriculture can look forward with confidence to the future. Agriculture is not only the chief among those fundamental and ancient tasks which have been essential to the survival of mankind, but also ranks first among the prere-quisites to industrial and other developments.

History affords Us ample evidence that mankind abandoned its nomadic way of life and developed a settled, communal economy only when man became skilled and competent in agricultural techniques. From the beginnings of recorded history, right up to the Middle Ages, and even as late as the beginning of the Industrial Age in which we now live, agriculture has always constituted the fundamental source of wealth for the human race. Only when a solid agricultural base has been laid for Our country’s commercial and industrial growth can We ensure the attainment of the ultimate goal of Our develop-ment programme, namely, a high standard of living for Our people. Commerce and industry, being concerned in the main with production and distribution, can only develop and profit from existing resources, but cannot actually create things which did not exist before. Most of the districts of Our Harar Province are populated mainly by nomadic people. Now that We are in a position to anticipate an adequate water supply from the rivers and wells in the region, the area will flourish and land will no longer lie fallow in the province if only the people of Ogaden, Esa and Adal could be educated in agricultural techniques. All this can be attained only by means of the wisdom which flows from the fountain of education. While this College will serve the whole of Our country, its being established in the Province of Harar is the result of careful planning and consideration on Our part. Even in this nuclear age, in spite of the revolutionary changes in man’s way of life which science has brought

about, the problem of further improving and perfecting agricultural methods continues to hold a position of high priority for the human race. It is hard to believe that a substitute can ever be found for the occupation of agricul-ture – a sacred task graciously conferred upon man by God to serve as the source of his well-being and the basis of his wealth.

Our country, Ethiopia, being blessed with an abundance of natural resources need not be anxious about her own needs. However, it is Our constant endeavour and Our firm desire, that Our people will produce not only enough to meet their own requirements but that their production will enable them to share and exchange the fruits of their labour with other countries. If only Ethiopia, with an assured wealth of natural resources, would look at what the barren SaharaDesert has been made to produce by the endeavour of trained scientists, she would realize that science is a source of wealth. We would, therefore, have Our students and scholars accept as their primary duty the attainment of scientific knowledge through education. We have placed Our trust in this College to be the chief instrument for the attainment of this high goal, and We are confident that the students who have today received their diplomas from Our hands, as well as those who follow them in the future, will through their achievements furnish Us with tangible evidence of the fulfillment of this Our purpose and Our desire. Agriculture and industry are indispensable one to the other. Only close co-operation between these two branches of knowledge can guarantee the fulfillment of Our programme of economic development for Our country. This College, which holds a prominent place in the

plans We have laid down for the prosperity and welfare of Our beloved people and country, can look forward to receiving the same constant support which We have shown in the past. It is with pleasure that We express on this occasion Our gratitude to Our great friend, the United States of America, for the generous and significant assistance they have given to this institution as part of their great effort for the development of the spirit of cooperation and understanding among the nations of the world. We would request His Excellency the Ambassador to convey Our thanks to his Government. If the late Dr. Bennet, who laid the plans for this institution and whose great desire and tireless efforts to achieve the establishment of an Agricultural and MechanicalCollege in this country are well-known to Us, were with Us today to see the fulfillment of his plans, how happy he would have been! With deep sorrow in Our heart, remembering the words “Man proposes, God disposes,” We pay a tribute to his memory in this hour. We would like to express Our sincere thanks to the Director of the Point Four Programme in this country, the President and staff of this College, and all of Our officials who have laboured to bring this institution into being. It is not enough for the children of Ethiopia to be recipients of education. They should never forget that the responsibility for passing on this knowledge to others and of handing it over to the next generation rests on them.