Sex and Soul-ties, how to break free!

DID YOU KNOW the penis and vagina was made as the sweet fountain of life but through lust and sexual immorality it’s now become profane & contaminated? Instead of the womb bringing forth supreme beings, prophets, seers and healers, it brings forth demons, murderers and pedophiles to name a few!   Sincere prayer, ongoing meditation, fasting and using plant based life foods can heal many dis-eases.  But what about invisible forces and dis-ease that doctors and scientists don’t speak of?  We know there are two realms that wage war with hue-manity, the higher self and the lower self.  This beautiful Earth, we are formed from her, from rich dark earth, but her realm has been held captive by ungodly forces for generations, trapping many in a 3D virtual reality to imprison ones in the lowest realm which is a step higher than Gehennna/Hell the lowest region.

What happens when we have spiritual parasites attached to our energy field, our auras which take up it’s abode as an invisible host inside our souls? So it is in the spiritual realm, so below!  This article shines light on the spiritual revelation of Soul-ties.  It’s when two souls perform intercourse and both souls fuse into one and the energy from the source stays within your soul from 6 months to an entire lifetime.   It can only be rid through prayer, meditation and fasting.

Did you know the number one addiction to religious clerics today is pornography? With secret sins undercovered and ones professing to be the ultimate leader while putrid energy fill their soul, we must be mindful to strive to lead a clean and pure spiritual life, free of sexual immorality, impurities and lust.  This article will lead ones on the path to rid their spirit self of dark energies and foul parasites that latch on to our higher self.

Soul Ties: How to Break Them and Live in Freedom

Soul ties–or invisible bonds–wreak havoc on so many marriages. Today guest poster and author Danielle Tate explains what soul ties are, and how we can break them.

When I was 17, I naively thought the sexual behavior I partook in was harmless and momentary. I reconciled in my head that because we had intentions on getting married and because our hearts were “right” toward each other that sexual activity was somehow okay.

Two years later when we split, my heart literally ached. I remember standing in the grocery store parking lot where he worked just wanting him to hug me “one last time.” He was like a drug, a good drug that I needed. I was going through withdrawal over a silly boy but my body ached without him. Friends told me to move on but I could not get past the feeling that part of me had suddenly been ripped away. Recovery was slow and painful – filled with anger, rebellion and a new tattoo. 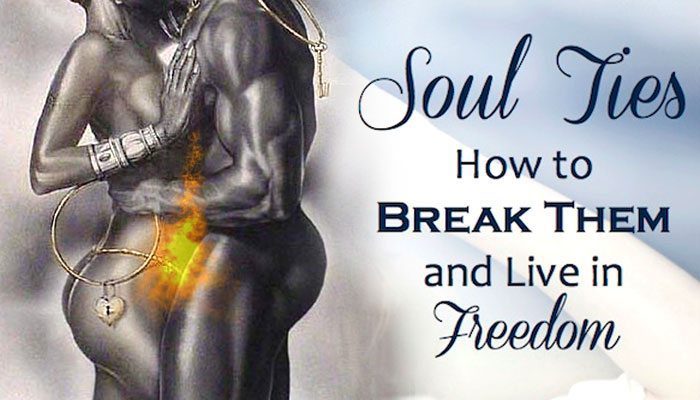 “The next time it will be different,” I told myself. Boy, was I right. It was all kinds of different. Seven years of hell ended with exposed lies, infidelity and abuse. Way different from my straight-A, Honor Society, college-bound beau. Yet the old familiar feeling of needing my fix still came even after I dumped his clothes in the driveway. I was addicted, but to what?

This time, unlike before, I initiated the break up. I knew he was a loser (though I see him differently now) and I knew it was a very unhealthy relationship. Yet for months, we had “conjugal visits.” It seemed I was the prisoner sentenced to a life of longing fulfilled only by someone I didn’t love and didn’t even want to be around.

The Dynamics of Soul Ties

A soul tie is defined as “A spiritual connection between two people who have been physically intimate with each other or who have had an intense emotional or spiritual association or relationship.”* If you think of sex inside the confines of marriage this is a wonderful thing. God created us to have sexual relations with our spouse that in turn create deep-rooted bonds.

See, He knew that after the honeymoon, there’d be morning breath, bills to pay, kids to raise and dirty socks left on the floor. He knew life would happen and so He created us to be deeply bonded with our spouse so that during the crazy seasons of life when we sometimes don’t really like our spouse, we would still be deeply bonded to them.

When we have a sexual experience, our brains produce dopamine, the same chemical that feeds a gambling addiction, your chocolate cravings and the junkie’s need for another fix. Dopamine is often described as the “feel good” chemical of the brain and it plays a major role in our lives (good and bad). You see, our bodies don’t care if it’s cocaine, a cupcake or a sexual experience – dopamine will be produced and it will bind us. This is why my former boyfriends were like my drug of choice and why I could not see myself without them. I was addicted to the high. I had created soul ties when I had these feel- good, intimate experiences with guys I wasn’t married to. This is also why it literally hurt when I broke up.

Soul ties are like super glue. If you’ve had sexual encounters outside of marriage, consensual or forced, there is most like a lingering soul tie that needs to be dealt with otherwise you’ll forever be plagued with thoughts, feelings and even actions that are unwanted. I mention forced encounters because, although pleasure is not associated with abuse, our brains still produce chemical reactions and our soul can still be tied to someone who has abused us.

Some symptoms of lingering soul ties include:

A Marriage in Crisis

Speaking of spouses, the hidden soul ties in my life deeply affected the first several years of my marriage. It gto so bad that my husband thought I was having an affair. I was distant, I disliked sex….I really disliked sex and I was not fulfilled. Unbeknownst to him, I would cry almost every.single.time we had sex. The guilt, shame and dirty feelings I had as a sexually active single woman carried right into my marriage. Those feelings didn’t go away just because we said “I do.” Ceremony alone was not enough to make my past sexual sins disappear. I needed healing. I needed forgiveness and I need a clean break.

There are 4 Key steps to breaking soul ties:

First, we need to acknowledge that there is a problem. Ask the Lord to show you who you have ungodly soul ties with. Make a list if you need to. Secondly, we need to confess and repent of our sins. This may involve finding a godly accountability partner that you can confess to and who can help you walk through the process. It maybe be a church counselor, pastor or elder or a family member.

Finally, you need to verbalize a prayer to break off the soul ties. You need to speak it out! Life and death are in the power of the tongue so when you speak out you are declaring with your mouth the power of Christ to break the ties to your past. You must also do an inventory and remove any mementoes, gifts or souvenirs from those past relationships.