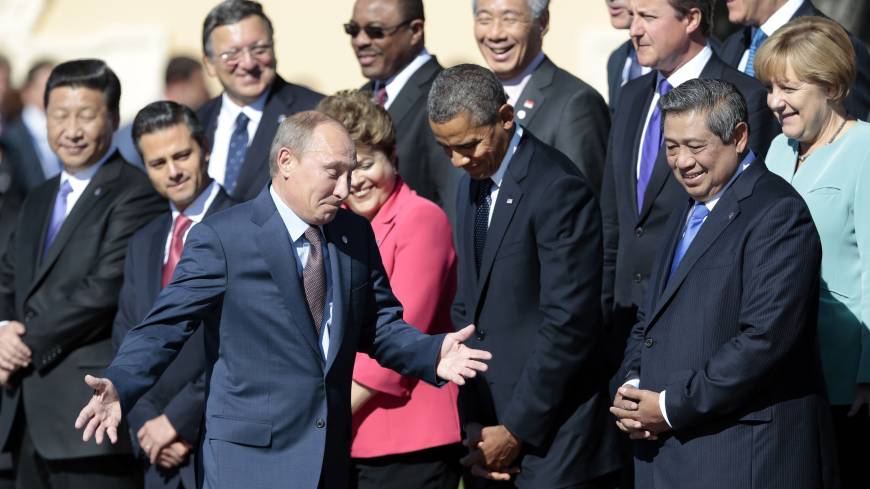 Russian President Vladimir Putin today ordered restrictions on food and agricultural imports for one year from countries that have imposed or supported sanctions against Russia, according to the Kremlin website. Russia is embroiled in the worst standoff with the U.S. and its allies since the Cold War over Ukraine, where government troops are cracking down on separatist strongholds in the east. The U.S. and the European Union targeted the Russian economy, expanding penalties last week, joined by Canada, Japan, and Switzerland, after the downing of a Malaysian Airlines System Bhd. passenger jet in Ukraine’s rebel-controlled area. Putin has refused to bow to sanctions, aiming with today’s measure “to protect national interests,” according to the decree. He called on the government to increase domestic supplies with the help of producers and retailers and to avoid spurring food-price growth.

I’m NOT Loving it

Even the McDonald’s Cheeseburger will have its day in court.

Russia’s consumer protection agency has filed a claim accusing the restaurant chain of violating government nutritional and safety codes in a number of its burger and ice cream products, a Moscow court announced Friday.

The suit could temporarily ban the production and sale of the chain’s ice cream, milkshakes, cheeseburgers, and Filet-o-Fish and chicken sandwiches, said Yekaterina Korotova, a spokeswoman for Moscow’s Tverskoi District Court, where the case will be heard.

“We have identified violations which put the product quality and safety of the entire McDonald’s chain in doubt,” Anna Popova, the head of Rospotrebnadzor, Russia’s consumer protection agency, said in statements reported by the Interfax news agency.

Food imports often fall victim to geopolitical tensions in Russia, which has banned cheese, wines and other regional delicacies from its post-Soviet neighbors when the mood has soured. Starting Monday, for example, Russia will ban imports of milk and dairy products from Ukraine, where pro-Russian separatists have declared independence in the country’s east, the RIA Novosti news agency reported on Friday.

While McDonald’s products are made in Russia, the company’s American identity is lost on few politicians here. When the chain shut down its three restaurants in Crimea after Russia’s annexation of the peninsula in March, some Russian lawmakers called for McDonald’s to be banned throughout the country, where there are more than 400 restaurants, according to the company’s Russian website.

In the past, the discussion over diet has even waxed philosophical. In 2012, the country’s chief sanitary officer, Gennady Onishchenko, used the discovery of a worm in a McDonald’s lunch to deliver a sweeping rejection of all burgers.

“This is not our food,” he said at the time.

Rospotrebnadzor’s complaints, however, were more concrete. The agency claimed that McDonald’s had misrepresented the nutritional values of its hamburgers and ice cream products, and said that in one restaurant inspected in May, traces of E. coli had been detected.

A McDonald’s representative, Nina Prasolova, said in an email that the company had not received an official complaint from either the court or Rospotrebnadzor, and that the nutritional information of its food was “based on the methodology approved by the Food Institute of the Russian Federation.” Ms. Prasolova did not return emails asking about the sanitary inspections.

Ms. Korotova would not comment on whether the court could temporarily close McDonald’s restaurants in the country, citing only Rospotrebnadzor’s demand for the court to “halt McDonald’s illegal activity.” A hearing is planned for Aug. 13.

“Retaliating against Western companies or countries will deepen Russia’s international isolation, causing further damage to its own economy,” Laura Lucas, a spokeswoman for U.S. President Barack Obama’s national security council, said in an email. “We continue to call on Russia to take immediate steps to deescalate the conflict and cease its efforts to destabilize Ukraine.”

The Russian government is drawing up a list of restricted goods. It plans to ban the import of all U.S. agricultural products, including poultry, as well as all fruit and vegetable imports from the European Union, according to a report in RIA Novosti citing Alexey Alekseenko, spokesman for Russian food safety watchdog Rosselkhoznadzor.

“The decision is not as critical as it looks at first glance,” Elena Tyurina, director of the Institute of Agrarian Marketing, said by phone in Moscow. “Many foodstuffs are imported from Latin America, Arab countries and Asia. We’ll be eating fewer apples and more bananas, oranges and kiwis.’

Russia imported $43.1 billion of food and raw agricultural materials last year. Of that, $36.9 billion came from countries outside of the former Soviet republics in the Commonwealth of Independent States, according to Federal Customs Service data.

EU members the Netherlands, Germany and Poland are among Russia’s 15 biggest food suppliers, as is the U.S., the U.S. Department of Agriculture said in a July 31 guide for exporters, citing data from the Global Trade Atlas.

About three-fifths of all U.S. farm exports to Russia this year have been soybeans, poultry and pork, according to USDA data. Even before the decree, Russia’s public health regulators banned some imports from EU member countries, the U.S. and Ukraine, in what those nations have called a veiled form of trade protectionism.

‘‘America’s farmers and ranchers would have been more surprised if they hadn’t announced a ban,” said Dale Moore, public policy director for the American Farm Bureau Federation, the biggest U.S. farmer group. “Russia does so regularly for seemingly small reasons, and now they have to deal with sanctions. This is a typical reaction by Russia.”

Who Colt the Game?

The U.S., the world’s biggest exporter of farm products, shipped $1.6 billion of food to Russia in 2013, or 4 percent of that country’s total imports, according to the USDA. Total farm-product exports from the U.S. will be a record $149.5 billion for the fiscal year that ends Sept. 30, the USDA said in May. The department projected sales to Russia of $1.3 billion, slightly more than theDominican Republic in that period.

“Russia, while very important, is only one of hundreds of our customers worldwide.” Ray Graeser, president of the American Soybean Association, said in an e-mail. “Sanctions and bans like the one proposed by President Putin serve only to hurt the Russian people by limiting their access to the food and products they need and want.”

Russia’s list of banned goods will be published no later than tomorrow, said Natalya Timakova, spokeswoman for Prime Minister Dmitry Medvedev in a telephone interview, declining to elaborate. The list will be flexible, allowing for revisions in goods and timing, according to the decree.

The limitations will include vegetables, fruits, meat products, and exclude wine and baby food, the Russian newspaper Vedomosti reported, citing an unidentified government official. Some dairy products will also be restricted, the newspaper said, citing another unidentified official.

The ruble, which has weakened 9.1 percent against the dollar this year, is among the 10 worst-performing currencies, according to data compiled by Bloomberg. It depreciated 0.3 percent to 36.1775 against the greenback at 6 p.m. in Moscow.

Import restrictions have a “direct effect” on food prices, keeping them high despite a deceleration in the cost of fruits and vegetables, Maxim Oreshkin, head of the Finance Ministry’s strategic planning department, said Aug. 4 on its Facebook page.

Imported goods account for as much as 25 percent of retail sales in Russia, Andrey Karpov, executive director of the Retail Companies Association, said by phone. The country already provides about 90 percent of its own poultry, he said.

Inflation as the biggest challenge facing Russia, a poll published by the state-run VTsIOM research center July 10 showed. While consumer-price growth decelerated for the first time this year in July, the rate remained above the central bank’s target for the 23rd month. The central bank declined to comment on the decree.

“I can’t yet tell whether it’s a benefit or a threat,” said Dmitry Vostrikov, head of development at Russia’s food producers lobby, Rosprodsoyuz. “We’ll need to wait for a detailed list from the government.”

Tyurina said domestic producers will provide the nation with its basic food needs and Putin’s decision may act as stimulus.