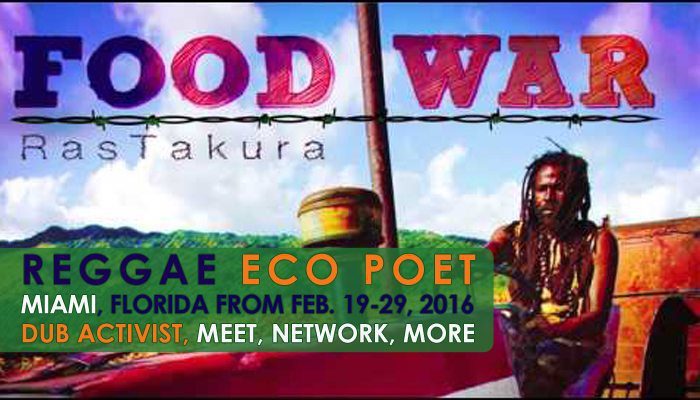 His work covers not only modern issues but critical ones that need to be brought to the forefront. He performed on Word Sound Power that was featured on BETJ. He is a Jamaican Reggae Dub Poet, recording and performing artist, Farmer, Painter, conscious Rastaman residing on the country side of the island of Jamaica.

RasTakura’s agricultural and environmental roots were deepened at the Knockalva Agricultural School, and the College of Agriculture, Science & Education (CASE).

In 2003 Takura was featured on the Multicast Poetz CD – a compilation album with Mutabaruka, I-Nubia, Steppa, alongside Neto & Ginsu – produced by Mackonen Blake Hannah & Eric Dixon.

RasTakura has been featured on IRIE FM’s programs – Running African & the Entertainment Buzz. He has been interviewed on the Elise Kelly Easy Skanking program on Irie FM, Jamaican’s number one Radio Station, plus numerous international interviews

He has been featured on T.V.J, CVM TV, as well as in several local print medias such as: The Star, The Gleaner and The Observer Newspapers.

He is “A Potent, Afrocentric Political Poet with a cause” – Rooted with two underground compilation CD’s, Run-Away-Slaves & Dragon Slayers, and a DVD, produced by C.P.T.C. RAS Poetz.

RasTakura was born, and still resides in the beautiful parish of St. Ann, in a small community neighboring Nine Miles, the home of Reggae Legend Bob Marley. He spent his earlier years growing up on a farm with his Grandparents then later lived with his single mother in a neighboring District. He recognized his talent while attending Bensonton All Age School where he gladly used the opportunities given to perform on every school and community concert as a Dancehall Deejay.

He has performed on some of Jamaica’s major shows including Reggae Sumfest, St. Mary Mi Come From, Capleton & Frenz, Fiwi Sinting, Rebel Salute ‘07, Heineken Startime, plus numerous appearances in schools, Colleges and Universities across the island. He is the founder of Dis Poem Word Fest, now going on its third year on CASE campus.