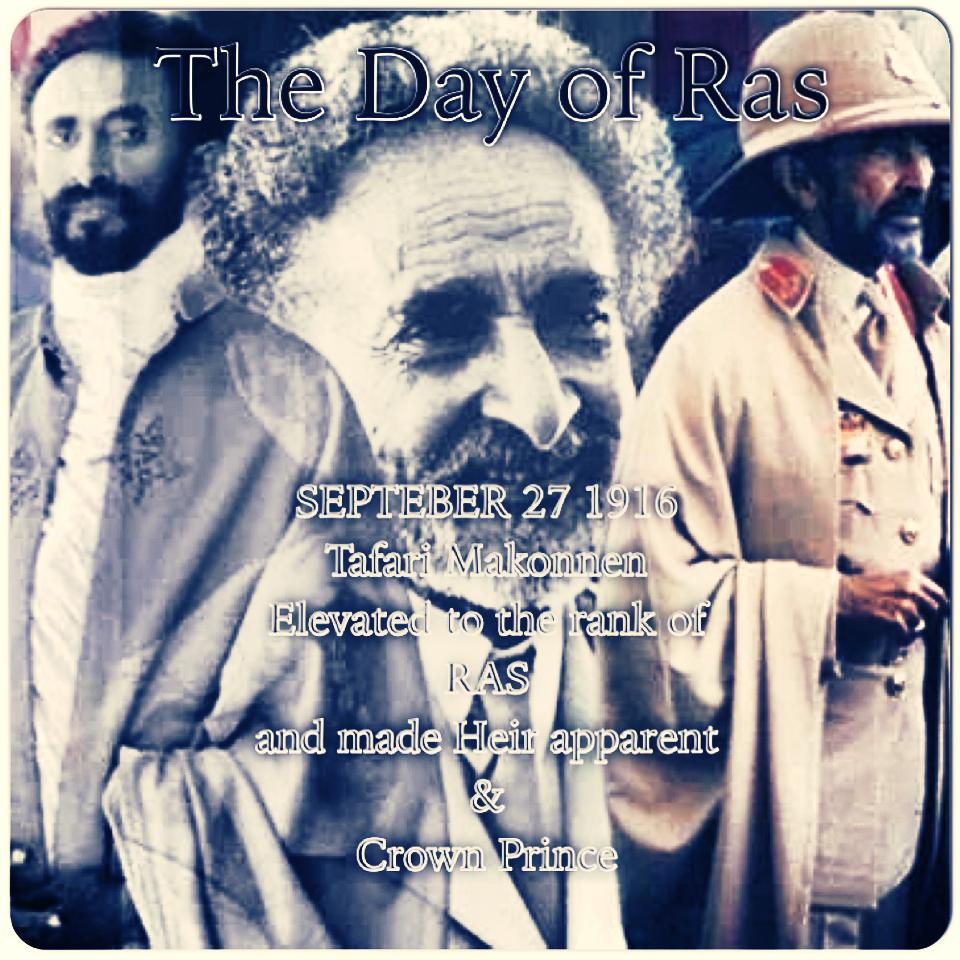 RasTafari Mesqel Alignment of The Finding of The True Cross, The Elevation of Dejazmatch Tafari, Shabbat Shuwb and Tz’om Gedaliah

During this time of the Blood Moon Signs, the Faithful Ethio-Hebrews and those of like mind may have noticed a very significant tetrad (“4″: the sign of the cross/the Hebrew letter Taw ת which has a gematria value of 4 and is written as + and sometime tilted as x in the ancient Hebrew script/The Alpha Omega would actually be translated from Greek to Hebrew as Aleph Taw) alignment of Holy Day observances (Bale Mesqel, The 98th Anniversary of Dejazmatch Tafari being elevated to Ras Tafari, Shabbat Shuwb and Tz’om Gediliah) which began on the evening of Friday September 26th, 2014 completing the evening of Saturday September 27, 2014. Taking into account the 2 day observation of Rosh HaShanah, which commenced on the evening of Wednesday September 24th completing on the evening of Friday September 26th, 2014, these days would culminate in a consecutive trinity of Holy Days.

Bale Mesqel (በዓለ መስቀል) The Feast of The Cross occurred this year Sept. 26-27, 2014: Meskerem ፲፯ 17 (2007 Ethiopic Solar Short Count/7507 Long Count) This commemoration celebrates the discovery of the True Cross by Queen Helena (Saint Helena the Mother of Emperor Constantine the Great of Rome) in the fourth century. The Meskel celebration includes the burning of a large bonfire, or Demera, based on the belief that Queen Eleni had a revelation in a dream. She was told that she shall make a bonfire and that the smoke would show her where the true cross was buried. So she ordered the people of Jerusalem to bring wood and make a huge pile. After adding frankincense to it the bonfire was lit and the smoke rose high up to the sky and returned to the ground, exactly to the spot where the Cross had been buried. According to local traditions, this Demera-procession takes place in the early evening the day before Meskel or on the day itself. The firewood is decorated with daisies prior to the celebration. Charcoal from the remains of the fire is afterwards collected and used by the faithful to mark their foreheads with the shape of a cross. The receiving of the mark of the cross is actually the seal mentioned in Revelations 7:3 (see also Ezekiel 9:4 where Taw [(תָּו) + or ת in modern Hebrew script] is translated as mark. Being that Our Lord and Savior Yeshua/Iyesus “Jesus” was crucified at the place of Golgotha (Γολγοθᾶ “Skull”) and the frontal lobe of the brain functions to recognize future consequences resulting from current actions, the choice between good and bad actions, the mark is symbolic of the spiritual stabilization or the “true cross” of the “mind” aemero (አእምሮ) which governs thoughts, feelings, emotions, desire, will (the “soul” nephash/nefs נֶפֶשׁ/ነፍስ) within Christ Consciousness: NOT TO BE CONFUSED WITH PSEUDO-“NEW AGE” CONCEPTS, but adhering to the revealed Word of The Source, found in The Bible.

One fact that has eluded many people is that both Emperor Constantine and His Mother Saint Helena were both Ethiopian-Hebrews of the True Ethio-Hebrew Christian Empire (see Kebra Negast chapter 72 http://www.sacred-texts.com/chr/kn/kn072.htm & Chapter 93 http://www.sacred-texts.com/chr/kn/kn093.htm). It must be noted the Roman Empire split in two, east and west, the west suffering repeated barbarian invasions and eventually collapsing while the east survived in comparative peace and harmony. The eastern empire was located in Byzantine where the seat of authority derived from Constantinople, and the western empire in Italy where the Papacy has and continues to attempt usurping ecclesiastical sovereignty. Much of the truth of the Ethio-Hebrew Empire has been obscured by the Roman Catholic and Anglo-Gentile iconoclast period as well as propaganda (more research, study and presentation should be focused on sorting through this subject matter)

Coin minted by Constantine I

The 98th Anniversary commemorating the elevation of Dejazmatch Tafari to Ras Tafari (ራስ ተፈሪ) “Head to be Reverenced” (confer with Rosh Tiferet [רֹאשׁ תפארת] “Head of Spirituality, Balance, Integration, Beauty, Miracles, Compassion) occurred this year on September 27, 2014 (83 Addis Zemen [አዲስ ዘመን] “New Age” Revelation of Qedamawi Haile Sellassie on November 2, 1930). The historical circumstances that manifested the elevation of Ras Tafari has been focused on (but are not prophetically limited to-Author Note) the apostacy of Lidj Iyasu. Lidj Iyasu, was the designated but uncrowned Emperor of Ethiopia from 1913 to 1916. Iyasu’s flirtation with Islam was considered treasonous among the Ethiopian Orthodox Tewahedo Christian leadership of the empire. On 27 September 1916, Iyasu was deposed. Ultimately, Iyasu was deposed on the grounds of conversion to Islam. In his place, the daughter of Menelik II (the aunt of Iyasu) was named Empress Zewditu, while Tafari was elevated to the rank of Ras and was made heir apparent and Crown Prince. In the power arrangement that followed, Tafari accepted the role of Regent Plenipotentiary (Balemulu ‘Inderase) and became the de facto ruler of the Ethiopian Empire (Mangista Ityop’p’ya). Zewditu would govern while Tafari would administer. For the record, biblical notations are hereby cited from 1 Corinthians 11:3 But I would have you know, that the head of every man is Christ; and the head of the woman is the man; and the head of Christ is YAH; Ephesians 4:15 But speaking the truth in love, may grow up into HIM in all things, which is the head, even Christ; Ephesians 5:23 For the husband is the head of the wife, even as Christ is the head of the church: and he is the saviour of the body. Shabbat Shuwbah (שבת שובה) “The Sabbath of Return” also called “The Sabbath of Repentance/Teshuwbah (תשובה)” occurred this year September 26-27 2014:Tishri 3 5775 (Hebrew Lunar Orientation). It is the Shabbat that occurs during the Ten Days of Repentance, but is between (i.e. not including): the two consecutive Days of Rosh Hashanah; and the Day of Yowm Kippur “Day of AtONEment”. The name Shabbat Shuwbah comes from the first word of the Haftarah (The Nebiyat/Prophetical Reading) that is read on that day, Hosea 14:2-10, which literally means “Return!”. The designation of “The Sabbath of Return” is assigned as it being one of the Aseret Y’may Teshuwbah (עשרת ימי תשובה) “Ten Days of Repentance”, which completes on Yowm Kipur. Prior to the Dispensation of Grace, that was ushered in by the Sacrifice of Our Lord and Savior Yeshua HaMashiakh/Iyesus Kristos/”Jesus Christ”, all the men of Israel were to appear before Yahweh (HE WHO BE WHO HE BE “His Divine Majesty”) during the 3 appointed times (a Trinity) of Shalosh Regalim (שלוש רגלים)Pesakh/Fasika “Passover”, Shabuot/P’ent’ay “Pentecost” and Sukkot (“Feast of Tabernacles” which occurs 5 [The Number of Grace] days after Yowm Kippur, at the place that Yahweh chose to appoint”. Although it is recognized by the that Zion (The House of David) has been reestablished in Holy Ethiopia (see Kebra Negast Chpt 45-53 Link: http://www.sacred-texts.com/chr/kn/) and the faithful should make efforts to contribute to the restoration and posterity of the Davidic Monarchy (see Link: http://www.ethiopiancrown.org/)), as well as look forward to reclamation of the land declared in the Abrahamic Covenant. Today, it is proclaimed that the appointed place is no longer merely a physical location but to be spiritually present in the body of Christ in heart and in mind. Being conscious that the Word of Redemption and Full Salvation has been fulfilled in the Sacrifice of Yeshua HaMashiakh/Iyesus Kristos “Jesus Christ”: Israel, the True Church and the righteous among the nations (a Trinity) no longer need to fret about being inscribed in Sefer HaMowt (סֵפֶר המוּת)
“the Book of Dead” at Yowm Kippur. The curses for disobedience (the law of sin and death) have been fulfilled by Yeshua HaMashiakh/Iyesus Kristos “Jesus Christ” Seh HaElohim/Igziabher Beg “The Lamb of GOD” (שֶׂה האֱלֹהִים/እግዚአብሔር በግ), the only acceptable sacrifice that Yahweh provided for Himself. Thus, in “repentance” metanoeō (μετανοέω: having a change of mind) about our lives as a reflection of His Word, praying and asking Yahweh (without doubt), in the Name of His Son, for the 7 blessing of life in Christ (double portion, financial, restoration, wonderous deeds, Yahweh’s presence, family blessing and deliverance as foretold of in Joel 2:23-32.). Moreover, by His Grace, we continue to spiritually fast from pride, greed, lust, anger, gluttony, envy and laziness but begin feasting on humility, liberality, chastity, mildness, temperance, contentment and diligence.

Tz’om Gedaliah (צוֹם גְּדַלְיָּה‎) “Fast of Gedaliah ‘Yahweh is Great’” occurred this year September 26-27 2014:Tishri 3 5775 (Hebrew Lunar Orientation). Gedaliah was appointed by Nebuchadnezzar II of Babylon as governor of Yehud province, which was formed after the defeat of the Kingdom of Judah and the destruction of Jerusalem, in a part of the territory that previously formed the kingdom. He was supported by a Chaldean guard stationed at Mizpah. On hearing of the appointment, the Judeans that had taken refuge in surrounding countries returned to Judah. Ishmael, and the ten men who were with him, murdered Gedaliah, together with most of the Judeans who had joined him and many Babylonians whom Nebuchadnezzar had left with Gedaliah. The remaining Judeans fled into Egypt.
For a more detailed account of Tz’om Gediliah please see link to our Brother Page RasTafari Renaissance: http://rastafarirenaissance.wordpress.com/2014/09/28/tzom-gedaliyah-%e2%9c%a1-%d7%a6%d7%95%d6%b9%d7%9d-%d7%92%d6%b0%d6%bc%d7%93%d6%b7%d7%9c%d6%b0%d7%99%d6%b8%d6%bc%d7%94%e2%80%8e/