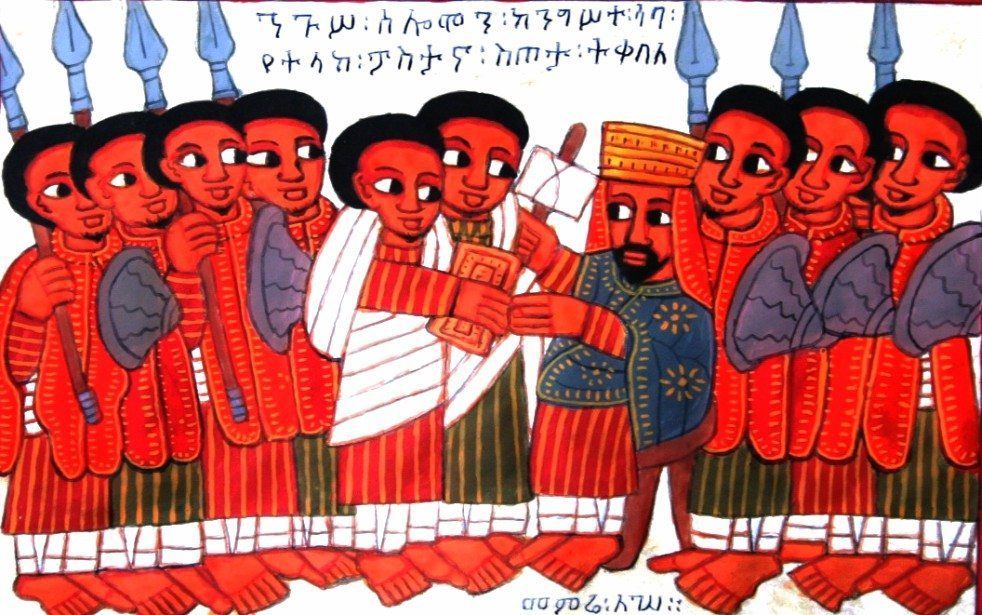 Quick Facts | The Kingdom of King David in Ethiopia

Unlike the Bible and Josephus, the Kebra Negast provides details of Solomon’s gifts—beautiful apparel, 6000 camels, wagons laden with luxurious goods, and vessels for travel over desert, air, and sea. Because she was now pregnant with his child, he also gave her a ring, for he hoped that she would bear him a son, who might in time visit Jerusalem and prove his identity to Solomon. And Queen Makeda departed and came into the country of Bala Zadisareya nine months and five days after she had separated from King Solomon. And the pains of childbirth laid hold upon her, and she brought forth a man-child, and she gave it to the nurse with great pride and delight. And the child grew and she called his name Bayna-Lehkem (Menelik), which means “son of the wise man.”When he was twenty-two years old he was skilled in the art of war and horsemanship, in the hunting and trapping of wild beast, and in every thing that young men desire to learn. And he said unto the Queen: “I will go and look upon the face of my father, and I will come back here by the will of God, the Lord of Israel.” When King Solomon saw his son, he rose up and moved forward to welcome him, and he embraced and kissed him, and said unto him: “Behold, my Father David hath renewed his youth and hath risen from the dead.” And Solomon the King turned around to those who had announced the arrival of the young man, and said unto them: “Ye said unto me, ‘He resembleth thee,’ but this is not my stature, but the stature of David my father in the days of his early manhood, and he is handsomer that I am.” And Solomon the King rose up and went into his chamber, and he arrayed his son in apparel made of cloth embroidered with gold, and a belt of gold, and he set a crown upon his head, and a ring upon his finger. Having arrayed him in glorious apparel, which bewitched the eyes, he seated him upon his Throne that he might be equal in rank to himself. Then he said unto the nobles and officers of Israel: “O ye who treat me with derision among yourselves and say that I have no son; look ye, this is my son, the fruit from my body, whom God, the Lord of Israel hat given me when I expected it not.” And his nobles answered and said unto him: “Blessed be the mother who hath brought forth this young man, and blessed be the day wherein thou hath union with the mother of this young man. For there hath risen upon us from the root of Jessse a shining man who shall be king of the posterity of his seed. And concerning his father none shall ask questions for verily he is a Israelite of the seed of David, fashioned perfectly in the likeness of his father’s form and appearance; we are his servants and he shall be our King.” And they brought unto him gifts each according to his greatness. Menelik along with the Elders of Israel took the Ark of the Covenant and established the Kingdom of David in Ethiopia, this Kingdom remained up till the time of Haile Selassie I, the Last Solomonic King of Kings of the Earth.

I am very pleased to send you words of my best wishes for your happiness, progress and peace, on this blessed day for mankind, ...
Theme developed by TouchSize - Premium WordPress Themes and Websites