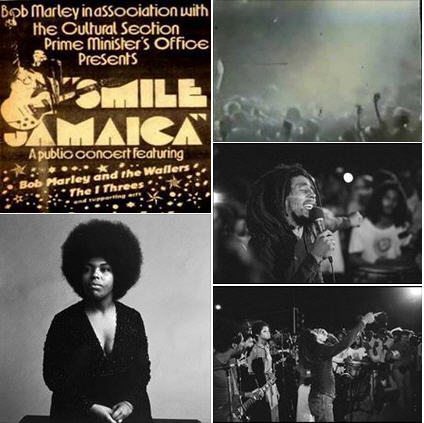 It is the culmination of almost a decade of research.

A caravan of CARS pulls up. Guards and assistants usher a caramel-complexioned female, Afro full-blown from the vehicle. 39-year old ROBERTA FLACK, in town for the concert, is rushed into the retreat.

FILM CREW LEADER
Hello, I’m David. We are a film crew sent here by Perry Henzell. Uh, we’re here to film the concert. Our director, Jeff Walker should have called.

The Dread eyes them suspiciously with his one good eye.

The camera crew leader keeps the conversation going, showcasing neither fear nor doubt as he speaks.

CAMERA CREW LEADER
Uh, sir, I assure you. We have the express permission of the Prime Minister, uh Mister Manley and Island Records to film this here concert. IF there’s still going to be a uh, concert.

The camera crew hustles inside, walking into a room filled with Dreads, Roberta Flack, and some Jamaican political figures. The Camera Crew Leader spots Nesta, and wanders over to him. A machete-gripping Dread blocks his path like Damocles with a flaming sword.

CAMERA CREW LEADER
Yes, as I stated before, I’m from the film crew. We were sent here to film the concert. We offer our sincerest apologies for our tardiness. Uh, we come bearing gifts.

He motions towards Nesta who stares at him quizzically. He tries to reach into the bag, but THE DREAD TAPS HIM WITH THE BLADE.

The Dread inspects the bag and pulls out a wrapped box. The camera crew leader reacts.

CAMERA CREW LEADER
We heard how you love boots, eh? So we brought some. We are saddened to hear about your calamity. Please accept this gift as a token of our appreciation.
Nesta motions for the Dread to pass him the box. Nesta retrieves the box, flips it around his hands. He pulls out a WICKED pair of SOCCER BOOTS. Pele would be jealous.

The camera crew leader nods seeking approval, as a smile flashes across Nesta’s face. It is the first we have seen him smile since the shooting. He jumps up and retreats to a room.

Nesta kicks off a pair of well-worn sandals as he plops down upon edge of the bed. He reaches under the bed and pulls the SOCCER BOOTS out.

Neville awakens on the couch, almost dropping the pistol laying on him to the floor. He grips it, goes to the window and looks out.

A POLICE GUARD is asleep in a chair on the stoop. Neville yanks the door open, enraged.

NEVILLE
Is so yuh guard a black man! Wake up ya rass!

His admonishment is broken by a YELP coming from inside the house, as Neville and the officer rush inside.

Neville rushes down a hallway into Nesta’s room. He finds him curled on the bed, howling in pain, blood pouring from his RIGHT GREAT TOE.

A Dread inspects the boot. He withdraws a small length of COPPER WIRE from inside its core.

He leaves the room with the boots in a hurry.

THE BANDAGED FOOT OF NESTA hangs out from covers as we scale his body upward to his EYES.They awaken suddenly, LION-LIKE. He reaches beside him and produces a walkie-talkie.

A voice blurts from the speaker of the walkie-talkie.

We hear the ROAR OF THE CROWD through the transmission in the background.

Nesta enters the room, straight into the anticipating faces of band members and entourage. Rita, Neville, and Judy approach.

JUDY
Ya sure ya wan do it boss?

WE JOIN a caravan of civilian and police cars, sirens screaming, and hauling ass. At a dizzying speed we bend, and turn along the winding roads leading from the hill towards the city center.

THE CAMERA CREW is filming all of the action.

We come upon what first appears to be the dispersing of a large rally, but it’s merely a predecessor to the mayhem lining the outskirts of HEROES PARK CIRCLE.

People lining the roads spot Nesta in the car and begin cheering fanatically. A man eagerly screams into a walkie-talkie, as the motorcade reaches the festival site.

The crowd teeters on the edge of mayhem as the cars halt. Nesta emerges, long sleeved denim shirt. Soon as he exits the vehicle, he seems to be swept away in a tide of people leading him to the stage.

TWO LARGE MEN can barely control the momentum as they pass him like a spliff onto the stage. THE FILM CREW is shooting continuously; they take their positions at STAGE RIGHT.

A scramble of band members assembles onstage, along with members of another band, THIRD WORLD. Judy and a bandaged, nightgown-clad Rita are on background.

An audacious Manley walks out, holding SELASSIE’S SCEPTOR. He walks straight to Nesta becoming as exposed as he is, and hugs him tightly as THE
CROWD blusters, almost in ANARCHY.

Manley then walks off the stage and climbs atop the roof of a van, unafraid of the easy target he instantly becomes. Nesta approaches the microphone, then HE SHAKES HIS DREADS.

NESTA
When me decided to do dis yere concert two anna ‘alf months ago, me was told dere was no politricks! Mi juss wanted ta play fa de love of da people. Me only gonnna sing one tune.

TWO DREADS in the crowd behind Nesta watch him perform.

AS IF. Fearless as ever, Nesta shows no signs of slowing down as he literally COMMANDS the audience.

He begins a ritual dance, as the spirits of the ancestors rhumba along. We briefly see CUDJOE KWADWO, and other PHANTOM MAROON, ARAWAK, & TAINO WARRIORS DANCING.

They are barely visible, transparent. Strengthening him, guiding him, possessing him, and transposing him. WE SEE THE TRANSFORMATION as they enter him.

He passes the microphone and marches to the edge of the stage. Before 80,000 people, he unrolls his left sleeve, opens his shirt and SHOWS HIS GUN WOUNDS.

After pointing to each of them, he evanesces into the crowd behind him.

EMCEE
Bob Marley come out, sing it! PRAISES! Come on people, de mon come out of his bed ta sing fe yuh tonight, and HE BURST! BOB MARLEY BURST! Brothers and Sisters, when you leave here tonight, we want you to take with you the love and the peace that has been manifest here tonight at Heroes Park Circle!

A lone 1975 GULFSTREAM IISP idles on the tarmac. A nondescript vehicle pulls up. Nesta steps out, and removes his shoes. He prostrates and kisses the ground.

He stands and surveys the full skyline of the island waking up before him. Then he boards the plane. After idling a few minutes, the door shuts, the plane taxies and takes flight as CAMERA SNAPSHOTS taken by an INTELLIGENCE OFFICER capture its ascent.

Disclaimer:
This message is privileged, confidential and subject to copyright. Any unauthorized use or disclosure is prohibited.