Obama Executive Order 13603 Authorizes Slavery In The US

In March 2012, President Obama quietly signed an Executive Order that has major implications should some sort of national emergency arise, such as enabling the federal government to take over management and distribution of all food, water and other resources.

President Obama signed his own executive order which allowed for the President to enact slave labor, on a large scale, on American soil.

For the Americans who have been targeted for FEMA camp detention, most will voluntarily self-incarcerate in order to avoid starvation for both them and their families. The following excepts from EO 13603 will be enacted. 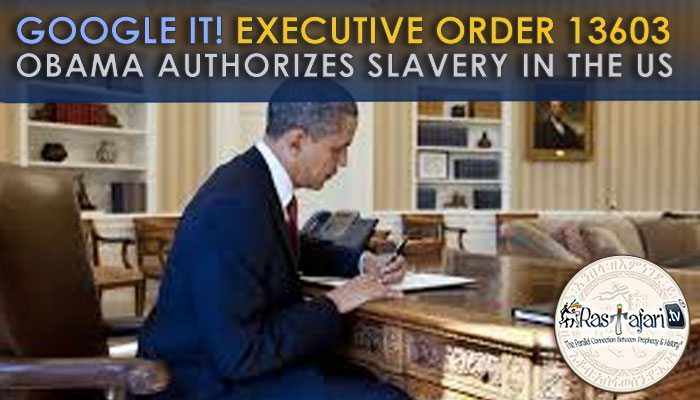 Third world population control, using food as one of the primary weapons, has long been a matter of official covert US national policy and a portion of President Obama’s Executive Order (EO 13603) is a continuation of that policy. Americans will be the new third world and your food will be withheld in order to enforce compliance with the planned slave labor in support of the WW III production needs.

Most Americans will report for duty on a voluntary basis in order to avoid starvation. Duty for what?

According to Executive Order 13603, the President, or the head of any federal agency that he shall designate, can conscript “persons of outstanding experience and ability without compensation,” in both “peacetime and times of national emergency.” I can hear the Obama supporters now as they will write to me and say, “Obama would never do that, you are drinking from the Kool-Aid”. Well, here it is, you can read it for yourself.

Sec. 502. Consultants. The head of each agency otherwise delegated functions under this order is delegated the authority of the President under sections 710(b) and (c) of the Act, 50 U.S.C. App. 2160(b), (c), to employ persons of outstanding experience and ability without compensation and to employ experts, consultants, or organizations. The authority delegated by this section may not be redelegated.

This means that Obama, and his fellow communists, can seize any resource, property, or person at any time for any reason, including being able to force that person to perform assigned labor without being paid.

There is only ONE word for forced, “uncompensated employment”. That word is slavery. Congratulations to President Obama, he has effectively repealed the 13th Amendment to the Constitution.

Section 601 of the act specifies, in part, how far the government can go in terms of making you their slave.

(1) collect and maintain data necessary to make a continuing appraisal of the Nation’s workforce needs for purposes of national defense;

(3) upon request from the head of an agency with authority under this order, consult with that agency with respect to: (i) the effect of contemplated actions on labor demand and utilization; (ii) the relation of labor demand to materials and facilities requirements; and (iii) such other matters as will assist in making the exercise of priority and allocations functions consistent with effective utilization and distribution of labor;

(4) upon request from the head of an agency with authority under this order: (i) formulate plans, programs, and policies for meeting the labor requirements of actions to be taken for national defense purposes; and

Obama Executive Order 13603 Authorizes Slavery In The US

In issuing the order, EO 13603, titled, “National Defense Resources Preparedness,” Obama claimed authority under the Defense Production Act of 1950, a Korean War-era statute (50 U.S.C.) (see it here) that gives the government the power to marshal whatever resources are necessary to protect and defend the country during “military conflicts, natural or man-caused disasters, or acts of terrorism within the United States,” the statute says.

In justifying the order, Obama wrote in Section 102 under “Policy:”

If you like your food, you can’t keep it

Among other things, the order directs various federal agencies and government officials to “identify requirements for the full spectrum of emergencies, including essential military and civilian demand,” and “assess on an ongoing basis the capability of the domestic industrial and technological base to satisfy requirements in peacetime and times of national emergency, specifically evaluating the availability of the most critical resource and production sources, including subcontractors and suppliers, materials, skilled labor, and professional and technical personnel.”

In addition, the order directs government agencies “to take actions necessary to ensure the availability of adequate resources and production capability, including services and critical technology, for national defense requirements.”

The need for government to not only ensure its functionality but also its survival during a time of emergency is understandable; all governments do this. But the timing of the order – as well as the motivation for issuing it – is what remains suspect.

Acquire storable food ‘off the grid?’

In addition, he notes, “food resources” includes “all potable water” and every imaginable agricultural product.

What is disturbing, he writes, is the order’s potential implication for anyone who is storing food in their homes or in special locations for consumption in the event of an emergency. The order – and indeed, the 1950 act – appear to grant the government such authority.

Also, Hodges notes, way back in 2008, before Barack Obama was elected to his first term, the Bush administration began mass purchases of storable foods, something that alarmed food sellers at the time.

It’s not clear what enforcement mechanisms would be employed by the administration should the president declare a national emergency and order stockpiled food confiscated, but such a scenario is unsettling on many levels. Not only would families be disrupted and immediately dependent upon federal, state and local agencies for subsidence, but there very likely would be violence directed toward any government agency or military unit instructed to confiscate private food stores.

Some have suggested bartering or using cash as ways to acquire storable foods “off the grid,” so as not to flag yourself like you would with any purchases using debit or credit cards.

Read about other questionable activities and executive orders coming from the Obama administration at Obama.FETCH.news