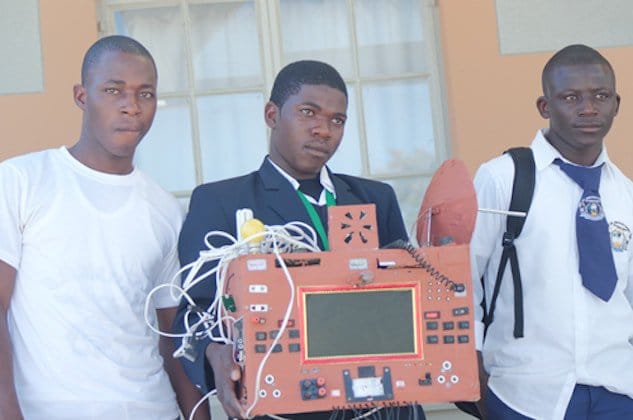 A Namibian Grade 12 learner Simon Petrus is making waves after he invented a mobile phone, with no sim-card, which uses radio signals and doesn’t require airtime to make calls.

A Namibian Grade 12 learner Simon Petrus is making waves after he invented a mobile phone, which uses radio signals and doesn’t require airtime to make calls.

According to New Era, Petrus, who is a learner at Abraham Iyambo Senior Secondary School, made the phone using parts from a telephone and television set, and his invention doesn’t even need a sim-card to make calls.

The mobile device took the whiz kid two years to complete, and it has not been plain sailing for the young inventor, who faced financial difficulties. The project was funded by Petrus’ unemployed parents, who had to sacrifice over N$2 000 (U.S$ 146) to ensure that his project would be completed successfully.

The invention, which is made up of a radio system, is attached to a box and makes voice calls, while also doubling up as a TV, allowing the user to watch one TV channel. Petrus’ invention is not a fly-by-night success story. Last year the learner won a gold medal at the NamPower national schools’ competition, after he reportedly invented a machine that serves as a seed drier and cooler.

Petrus’ invention continues to cause a stir on social media, where the development is being celebrated as a remarkable example of the innovative nature and potential of young people on the continent, which needs to be supported.

Over the past few years, Namibia has been the birthplace of various innovative projects by young people.

In 2014,  another young inventor from northern Namibia, Josua Nghaamwa built a satellite dish booster using scrap material to enhance internet connectivity, to benefit those living in the rural areas where the signal is significantly weaker than normal.

via: This is Africa