Public Defender Arlene Harrison Henry, on December 9, 2015, sent an explosive report to parliament, the result of an investigation into several incidents, including the blood-stained Coral Gardens affair, for which she has recommended reparations and apology by the Jamaican State to Rastafarians. The Jamaica Observer presents part two of an edited version of the report:

In the period of the Italian invasion of Ethiopia and the formation of the Ethiopian World Federation (EWF), many Rastafarians established branches of the EWF in Jamaica. The Rastafari community was energised to lend support to the Ethiopian Emperor and Ethiopian people.

After his release from prison Leonard Howell, (first Rastaman) returned to St Thomas. However, he and his followers were mobbed by citizens in St Thomas in January 1937. Dunkley, Howell and Hinds continued their Rastafari evangelism separately in the late 1930s to early 1940s, in downtown Kingston and St Catherine.

Popular public sentiment openly denigrated Rastafari and suggested their extermination. The Rastafari were referred to as “the dangerous cult” in the Daily Gleaner in 1934. The public mobbing of Howell and his followers in 1937, was extensively reported. The police allegedly looked on or even participated. The fact that there was no reported public condemnation, demonstrates that there have long been hostile responses to Rastafari by the Jamaican citizenry, which were sanctioned by agents of the State. Howell’s move from St Thomas to Kingston was also met with complaints from many middle and upper-class Jamaicans.

By March 1937 the colonial secretary, in responding to a petition of complaint brought by the Kingston & St Andrew Civic League against the ‘religious sect’ known as Ras Tafari, advised that ‘…the Government is considering the enactment of legislation to prohibit the practices of these curious religious cults’.

Howell was again arrested and charged in 1937 and this time sent to the Bellevue Hospital where he remained until the end of 1938. He formed his Ethiopian Salvation Society in 1939 and continued to preach Rastafari beliefs in St Thomas, in spite of the actions of the State. By 1940 he was stopped again by police on the premise that his activities would incite the public during a period of the war.

Howell went on to establish his Rastafari commune at Pinnacle in St Catherine, which has its own long history of colonial surveillance and harassment by the State.

Pinnacle was singled out for special treatment not only by police officers but other agents of the state, in particular, the health authority. The strategy of the health authority is revealed in a communication dated 16.1.41 from the assistant director of medical services (ADMS) to the colonial secretary. The instructions given by the ADMS were for systematic inspections of the camp to detect breaches in public health laws. The ADMS concluded that the ‘Local Parochial Board appears to be in an excellent legal position to demand a number of expensive undertakings in the Camp with the alternative that they may go in and do the work and charge it to the owner…’

In response, the clerk of the Parochial Board R D G Lewars, assured the ADMS that such inspections and investigations were already being done and stated ‘…that there was always an appreciation of our powers under the Public Health Law but on the reports of our Health Department it would seem that there has been no ground for drastic action’.

The police continued its relentless march to quash the seeds of Rastafari which was regarded as inimical to the state and society. It was on the early morning of July 14, 1941 that a deputy commissioner of police led a party of 115 police officers to raid Pinnacle. The commissioner of police in his report to the colonial secretary dated 17.7.41, accounted as follows: “The male population of the Camp was rounded up by the Police and 70 of these arrested…and are now remanded in custody awaiting trial at Spanish Town.” Allegedly, “…in a field in the camp and close to Howell’s residence a ganja cultivation was found. 101 plants of Ganja were removed as exhibits together with a number of seedlings which were being cultivated.” Howell was again arrested and convicted, along with over 70 Rastafarians. Those events were extensively reported in The Daily Gleaner, heightening public fear and suspicion of Rastafari.

By March 25, 1944 Howell was again arrested and incarcerated at the St Catherine District prison awaiting trial on a charge of murder of his wife. The then attorney-general by letter dated 4.4.44, advised the colonial secretary that he terminated the prosecution as there was no basis in law for Howell to have been charged in the first instance, his wife having died of natural causes.

Reportedly, it was at Pinnacle that the more openly defiant manifestations of dreadlocks worn by Rastafari began to appear in the late 1940s to early 1950s. Some say the manifestation of dreadlocks was inspired by the Mau Mau revolutionaries then fighting colonialism in Kenya. This quickly spread among the younger, more confrontational Rastafari adherents, especially in the urban Rastafari camps such as the Youth Black Faith.

This inspired more fear among the Jamaican citizenry. The beards and the dreadlocks became symbols of Rastafari. This fuelled and exacerbated some of the anti-Rastafari prejudices, as well as contributed to Rastafarians being stereotyped as criminals.

Noted Rastafari elder, Philmore Alveranga, cites 1951 as the year when the first physical tribulation was visited upon Rastafari. In that year Wappy King was accused of killing a Chinese boy and raping the girlfriend who told the police that it was a ‘Rasta’ who did it, because he had a beard.

The event sparked intense public outrage against Rastafari…The Police responded by forcibly trimming men with beards, which included most Rastafarians.

The police arrested a suspect within two days. However, Rastafari was identified as the culprit and subjected to special treatment. The Gleaner reported the rise in “public resentment and hostility to bearded men and to their anti-social cult”, and that it had received numerous letters to the editor “demanding a campaign to clean out the dens of these Ras Tafarites” The Gleaner supported “a very necessary outbreak of public clamour for an end to be put to these queer sub-social and inimical groups” which had “created kraals of wickedness in the city”

One influential personality wrote in the Daily Gleaner in 1951 that:

“The worst evil of all are the members of that bearded cult who style themselves the Ras Tafarites and claim some kinship with Abyssinia. In reality this group has no religious significance, do not even know where Ethiopia is, and merely adopted the untidy habit of letting hair and beards grow through laziness and filthiness and a desire to appear more terrifying… if a start is made by cleaning out these so called Ras Tafarites it will have a salutary effect on the remainder of the wrong doers.”

A Gleaner columnist advocated the expulsion of Rastafari from their communities, including Wareika Hills, Palisadoes and the Foreshore Road area (Dunghill) and their removal to “prison camps” where they could be “tamed” with the tamarind switch or the cat-o-nine tails. It seems that the Government heeded the call of the public. An estimated 1,500 Rastafarians were forcibly evicted from Wareika Hills, Palisadoes and the Foreshore Road area (Dunghill). Many were charged for ganja. Persecution of Rastafari leaders continued. Leonard Howell was again arrested in April 1954 for unlawful, possession of medical instruments and in May 1954, Pinnacle was raided by police for the second and final time, that time on the premise of curtailing ganja cultivation there. The 1954 raid on Pinnacle was described as the biggest raid in local police history, involving over 173 armed policemen and over 140 Rastafarians arrested. The joint police/military force seized eight tons of ganja and arrested 140 persons; about half of them were women and children. During the following days they destroyed thousands of ganja trees. (Daily Gleaner May 25, 1954, p.1)

Most of those arrested, excepting the women and children, were convicted and sentenced to imprisonment ranging from six months to two years.

Pinnacle was destroyed and would never return to its former stability as a Rastafari communal space.

Indeed, it has been said that the history of the treatment of Leonard Howell and Pinnacle by the State “showed such unrelenting opposition to the settlement that with hindsight it is now possible to assert that they wanted to kill the seed of cooperation and open love for Africa before it blossomed in society.” 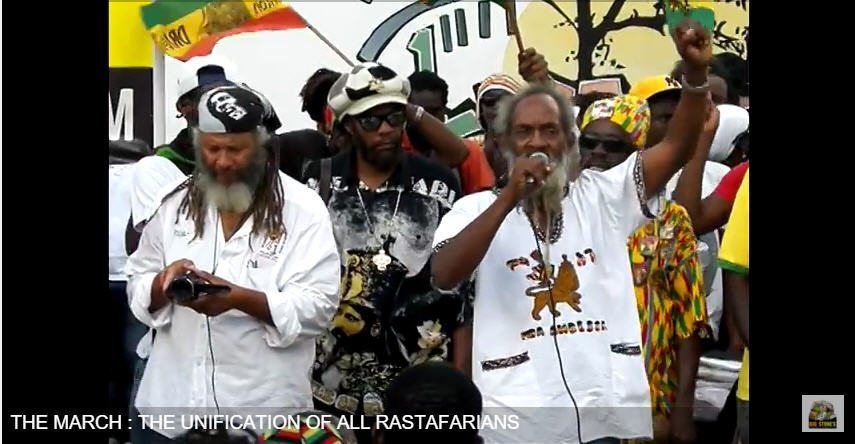