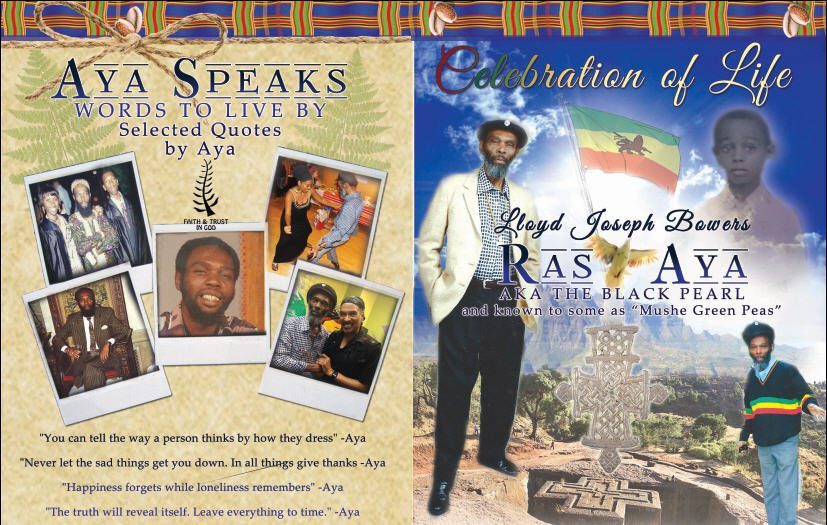 Aya was born on August 12, 1944 on 42 Fleet Street in Wareika Hill Jamaica to Uriah and Ruby-Ann Bowers. 1 of 9 children, Aya was always an extraordinary soul. With the loss of his father at the tender age of 10 years old, Aya sought male guidance within the hills of Wareika. He sought refuge in many of the Rastafarian elders such as Count Ossie, a well known drummer and musician. In 1966, Aya and many of his friends joined Count Ossie in welcoming Emperor Haile Selassie I during his visit to Jamaica. This marked a transformational time for Aya. His journey towards African liberation began.

Aya was a cultural preservationist, educator, self-taught scholar and prophet altogether. He had the gift of connecting with all walks of life through the knowledge he possessed. A well-read individual, Aya often spoke to those in his surroundings, with few boundaries, on the power of self-love, spirituality, righteousness and love for Africa. He fathered 7 children, but was a father to many at the same time. Aya’s ability to share life changing information to those around him kept him surrounded. Everyone enjoyed his company. There was a love vibration that flowed from Aya that was simply undeniable.

Aya’s portfolio was one that granted him speaking opportunities, musical connections and marked fame within his Jamaican cultural diaspora. He was a cricketer who bowled for Jamaica’s under 21 team, playing with the likes of Lawrence Rowe and many others. He began a journey into musical bliss, introducing reggae to the White Plains Community during a time when reggae was unpopular by the masses. Aya believed that music alone shall live and invested in this belief, which led him to promote events and artists such as Living Truth, Cookie Jar and many other local talents. “The Basement”, home to Aya for several years with his brother Jim, became a studio and a networking spot for the entire community. Aya often shared biblical scriptures and selective readings from books to inspire all who visited “The Basement”. In the latter part of his life, Aya shared much of his knowledge on 93.5 WVIP with Junior Jewara, often appearing as a special guest on his radio show. Speaking on topics such as fatherhood, Pan-Africanism, Caribbean history and reggae music, Aya was a recurring speaker.

Though he was close to many, there was one individual that Aya shard a special bond with. This is his older and only brother, Edwin Bowers, Better known as Jim. Jim has been his supporter through the years and Aya often spoke about this. However, their bond was evident for all to see. Aya would often say, “nobody can’t hurt Jim”… If you know Aya, you know what this means.

Unapologetic for being the bright soul he was, Aya was simply Aya. Without compromise, Aya was willing to share his truth under all circumstances. This alone was an inspiration. And so, as his daughter, I leave you with these words he left with me:

Time and no one goes unchanged
There are not many things in life you can be sure of
Except the sun comes from the sky and hummingbirds do fly
The young becomes the old, All mysteries do unfold
That’s the way of time

Aya transitioned on December 5, 2014, the same day as our dear Nelson Mandela. This is no coincidence. In the spiritual realm, the work continues. Aya often said, “the black man will rule again”. I trust that he’s working hard for freedom and redemption for all at home and abroad.

Celebration of Life Services will be held at:

Bunny Wailer cannot die, he has transitioned." (Asadenaki Wailer) In shock and dismay, the world has to face the passing of Nevil...

Vaughn Benjamin, the lead singer of Midnight and Akae Beka, has died. He was 50 years old. Benjamin’s death was confirmed on Novem...

"I Have a Dream," Address Delivered at the March on Washington for Jobs and Freedom   Author: King, Martin Luther,...

The war crimes trial of an aide to Ethiopia's former communist ruler has begun in the Netherlands. Eshetu Alemu, 63, is accused o...
Theme developed by TouchSize - Premium WordPress Themes and Websites