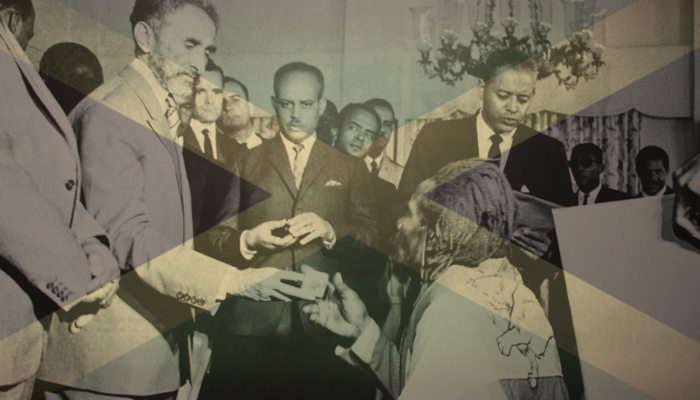 Over fifty years ago, Ethiopian Emperor Haile Selassie I visited Jamaica, one of the most memorable and frenzied events to have taken place here. It’s not that all Jamaica was enamoured by the Rastafarians’ claim that God had visited Jamaica. It was just that we dared not ignore Rastafari. Then.

Today, his grandson has come to visit on the 50th anniversary, and there is no such national excitement over his visit. Rastafari holds neither the threat nor the promise it did 50 years ago. It has largely been conquered by Babylon, enjoying greater influence and support in exile than at home. Rastafari has been eclipsed by the forces of globalisation or, more properly, by cultural imperialism.

As a cultural resistance, Rastafari is a largely spent force. Or perhaps one could say, at best, that what we are witnessing is not so much its decline as evidence of its success: The things it fought for are now taken for granted. It has been so successful, its influence now so mainstreamed that we are tempted to say it has outlived its usefulness.

After all, even those who are bleaching, some would insist, have no doubt that they are people worthy of success and achievement. Those in the dancehall culture who embrace bleaching are also assertive, brazen, and conscious of the power of their black bodies, which they flaunt in the dancehall. They believe they have a right to get ahead materially, to own their own businesses, to achieve economic independence.

Some would even say their bleaching is just part of their Anancyism, their playing fool to catch wise, exploiting a shade-conscious system to get by. A kind of Samfie trick to get ahead. But subservience is no longer accepted, even by bleachers, who are usually cited as the paragon of self-hate and black negation.

There has been the rise of a black bourgeoisie over the last 50 years and, particularly, since the 1970s. The Michael Manley era fostered black consciousness, black pride and black assertiveness, bolstered, as it was, too, by a strong Rastafarian cultural force. The Rastafarians have given us a lot. They forced black consciousness on many Christian churches which had a Eurocentric Gospel and which could not entertain a black representation of Christ.

Today, it is no longer radical for Christians to talk about a cultural identity as part of Christian identity. Even Evangelical Christians are now saying that black consciousness and Black Power can be taught alongside going to Heaven and accepting the Lord Jesus. Church liturgy and music have been significantly impacted by Rastafari acceptance of our cultural expressions and forms. We must never underestimate the positive impact Rastafari has made on us as a society, and how much we are indebted to this despised, oppressed and formerly marginalised group.

Luminaries like the late professors Rex Nettleford and Barry Chevannes have taught us a lot about Rastafari’s impact in Jamaica. And you must get that treasure which is the latest issue of Jamaica Journal, dedicated to those two intellectual icons.

When we could only see God through the eyes of our colonisers and oppressors, Rastafari taught us to see a God in our own image. And what we were taught as the unvarnished, unadulterated Gospel, we later discovered, not least of which through Rastafari-influenced perspectives, were simply Western cultural baggage under the guise of universality. We must pay homage to Rastafari for opening our eyes to the deception foisted on us by Babylon.

The studies are now conclusive that a people who have no confidence in themselves cannot be great. Or, to be more current, no prosperity without cultural specificity. Rastafari, by calling us to believe in ourselves, our ingenuity, our creativity, our right to prosperity, and in our place in the sun ignited our self-worth.

I myself have grown to appreciate Rastafari more as I have read more widely and deeply in philosophy and theology. At university here in the early 1980s, I did major research paper on Rastafari looking at the Twelve Tribes of Israel group which had attracted many middle-class persons. I had not become steeped as yet in postmodernist philosophy and phenomenology. I had been heavily influenced by Western Rationalist perspectives. So I had as a major critique of Rastafari that it had not developed a systematic theology, that it was too loose and intellectually promiscuous.

My friend Rex Nettleford, who was postmodernist before Derrida, Foucault and Lyotard, devoted a major part of his chapter in that much-quoted and hefty volume, Chanting Down Babylon, to critique my views. Rex strongly criticised my Sunday Gleaner article of December 24, 1995, ‘Rastafarians need a systematic theology’.

Rastafarian theology, Rex reminded me then (he himself had taught me at UWI), is about “taking the discourse into intellectual landscapes beyond narrow theological hermeneutics and exegesis, whose methods of argumentation are considered Christian-specific and predetermined in that tradition”.

Rastafari’s emphasis on Livity and praxis, rather than the detached, dispassionate and so-called “objective” epistemology of Western philosophy was something I had not appreciated as much in the early 1980s when I was at the UWI. My readings since then have given me a greater appreciation for my own cultural heritage of philosophising. After all, the existentialist philosophers – and even the Marxist philosophers – had been saying for a long time that this detached, objectivist approach was simply The Myth of the Given – or “false consciousness” in Marxist philosophy.

For Rastafari’s deep groundings with our African retentions of Revivalism and Kumina, you need to read Chevannes’ Rastafari: Roots and Ideology and Clinton Hutton’s fascinating article in the latest Jamaica Journal. As Hutton writes, the divinity of Selassie was already in Revivalism and Kumina. Besides, “the first set of people to whom principal Rastafari founder Leonard Howell preached the divinity of Ras Tafari were Bedwardites … the pre-eminent Revival leader.

“Moreover, Robert Hinds, a Bedwardite preacher, joined forced with Howell in 1933 preaching the divinity of His majesty … .”

Jamaica needs Rastafari now more than ever. But it is precisely a time such as this which makes it hard for Rastafari ideology to take on. While artistes like Chronixx, Protoje, Kabaka Pyramid and other conscious chanters are big hits with middle-class people here, don’t mistake that for acceptance of Rastafari cultural values.

If Andrew Holness is to have any chance of succeeding, the message of Rastafari needs to resonate in Jamaica.

Our youth need something beyond just grasping for prosperity. Prosperity has to have a philosophical foundation. If it is driven by sheer narcissism and an obsession with wealth and glory – what Rasses call vanity – then can’t sustain a nation. Our social-media generation is hooked on the hip, the trendy, the cool things as defined by an American culture of hedonism and atomism. The medium is the message. Our youth are committed to nothing beyond themselves and their narrow dreams.

Where is the great nationalistic, visionary, idealistic, patriotic spirit that gripped the youth of the 1960s (“we are building a new Jamaica”) and the 1970s (socialism, African liberation, community mobilisation)? Where are the notions of self-reliance, solidarity with the poor and oppressed of the world, global justice which Rastafari advocated? Rastafari was saying you are not defined by your possessions, but by love. ‘Livity’ was more important than bling. That message is lost on this generation and in this American-seduced culture.

We persecuted Rastafarians and let in the pirates. American cultural imperialism writ large. Jah save us!