Hunting for humans: Malawian albinos murdered for their bones

For Agness Jonathan, every day is a gamble with her children’s lives.

Simple questions like whether they should go to school carry an unimaginable risk of death and dismemberment to satisfy a barbaric demand.
This is because her daughters are living with albinism, a genetic condition resulting in little or no pigmentation in the skin, hair and eyes. And this makes them a target. 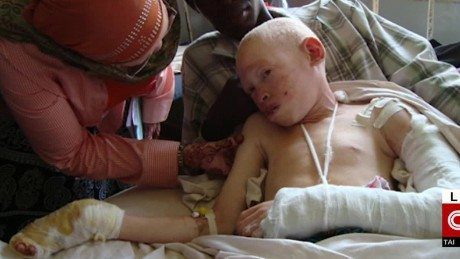 Malawi’s albinos at risk of ‘total extinction’, U.N. warns
It is children like Agness’ who, according to a newly released Amnesty International report, are being hunted like animals in Malawi where their bones are sold in the belief the body parts bring wealth, happiness and good luck.
The report chronicles the day-to-day lives of those living with the condition, and details the extent of a recent surge in killings of albinos living in the landlocked country in southern Africa.
The bloodiest month was April this year, when Amnesty says four people were murdered, including a baby.
One of the victims was 17-year-old Davis Fletcher Machinjiri, who left his home to watch a soccer game with a friend, but never returned.
The Malawian police say he was abducted by “about four men who trafficked him to Mozambique and killed him.” Describing his gruesome death, they say “the men chopped off both his arms and legs and removed bones. They then buried the rest of his body in a shallow grave.”
‘We are killed, we are hunted’: Albino activist fights witchcraft

Since 2014 at least 18 albinos have been killed, another five have been abducted and are still missing.
And if it weren’t for alert locals, Agness’ youngest daughter Chakuputsa would be one of them.
She was grabbed by three men while her mother was out working the fields. Agness describes how villagers chased after the men who eventually dumped the child in the bushes nearby. It turned out one of the attackers was a relative, someone, Agness tells Amnesty, she had considered like a brother. This, the community says, is all too common.
Attackers are known to sell body parts to witchdoctors in Malawi and neighboring Mozambique, hoping to make quick money.
Amnesty says “thousands of people with albinism are at severe risk of abduction and killing by individuals and criminal gangs,” while the United Nations warns that Malawi’s albinos are at risk of “total extinction.”
Grace Mazzah, a board member of the Association of People with Albinism in Malawi, is always aware of the price on her head.
These children were confined to a voodoo convent
“It really raises fear,” she says. “Why should people hunt me like they’re hunting for animals to eat?”
Source:  CNN