The 2019 Nobel Peace Prize has been awarded to Ethiopian Prime Minister Abiy Ahmed who made peace last year with bitter foe Eritrea.

He was awarded the prize for his efforts to “achieve peace and international cooperation”.

He was named as the winner of the 100th Nobel Peace Prize in Oslo, where he will receive the award in December.

Following the announcement, Mr Abiy said he was “humbled and thrilled”.

“Thank you very much. It is a prize given to Africa, given to Ethiopia and I can imagine how the rest of Africa’s leaders will take it positively to work on [the] peace-building process on our continent,” he added in a phone call with the secretary of the Norwegian Nobel Committee.

A total of 301 candidates had been nominated for the prestigious award, including 223 individuals and 78 organisations.

There had been great speculation over who would win the prize, with climate activist Greta Thunberg widely tipped as the favourite. Under the Nobel Foundation’s rules, nomination shortlists are not allowed to be published for 50 years, and the organisation says any speculation ahead of the announcement is “sheer guesswork”.

What has Abiy Ahmed done?

After becoming prime minister in April 2018, Mr Abiy introduced massive liberalising reforms to Ethiopia, shaking up what was a tightly controlled nation.

He freed thousands of opposition activists from jail and allowed exiled dissidents to return home. Under him, several women have also been appointed to prominent positions.

Most importantly, he signed the peace deal with Eritrea.

But his reforms also lifted the lid on Ethiopia’s ethnic tensions, and the resulting violence forced some 2.5 million people from their homes.

Why did he win?

Mr Abiy, 43, was honoured for his “decisive initiative to resolve the border conflict with neighbouring Eritrea”, the Norwegian Nobel Committee said.

“The prize is also meant to recognise all the stakeholders working for peace and reconciliation in Ethiopia and in the East and Northeast African regions,” they said.

“Peace does not arise from the actions of one party alone. When Prime Minister Abiy reached out his hand, President Afwerki grasped it, and helped to formalise the peace process between the two countries. The Norwegian Nobel Committee hopes the peace agreement will help to bring about positive change for the entire populations of Ethiopia and Eritrea.”

Since the Eritrea deal, Mr Abiy – the youngest head of government in Africa – has also been involved in peace processes in other African countries, the committee said. This has included helping to broker an agreement between Sudan’s military leaders and civilian opposition after months of protests.

Mr Abiy’s office said the award was testimony “to the ideals of unity, cooperation and mutual coexistence that the prime minister has been consistently championing”.

Another triumph for Abiy Ahmed

Since coming into office just over a year ago, Abiy Ahmed has made history and turned Ethiopian politics on its head.

Few had given him any chance of ascending to the prime minister’s office and even less had anticipated the sweeping reforms he would bring to a country that for years had been led by the iron fist of the Ethiopian People’s Revolutionary Democratic Front.

His most significant achievement was ending a bitter border dispute with Eritrea. He even went to the Eritrean capital, Asmara, receiving a rock star’s welcome – a sign of his popularity with the population weary of the two decades of hostilities between the two countries.

But also significant is the role he has played in bringing peace to the Horn of Africa region, from Sudan to Somalia and Djibouti, all which at some time have had border disputes.

Throughout he’s preached a message of Medemer – meaning togetherness or inclusiveness.

His Nobel win is yet another feather in the cap of this former intelligence chief.

What has the reaction been?

African leaders were among those to congratulate Mr Abiy following his win.

Somalia’s President Mohamed Farmaajo described Mr Abiy as a “deserving winner” as he congratulated him on Twitter. “I have enjoyed working with him on strengthening regional co-operation,” he wrote.

Liberia’s President George Weah expressed his “warmest felicitations for this noble feat”, while Ghana’s President Nana Akufo-Addo said the award was “a reminder to us all that peace is one of the most critical ingredients needed to make Africa successful”.

@PMEthiopia I hereby join the rest of Africa and the world at large in celebrating with the great people of Ethiopia and Prime Minister Abiy Ahmed for winning the 2019 Nobel Peace Prize Award. The Government & People of Liberia extend warmest felicitations for this noble feat. 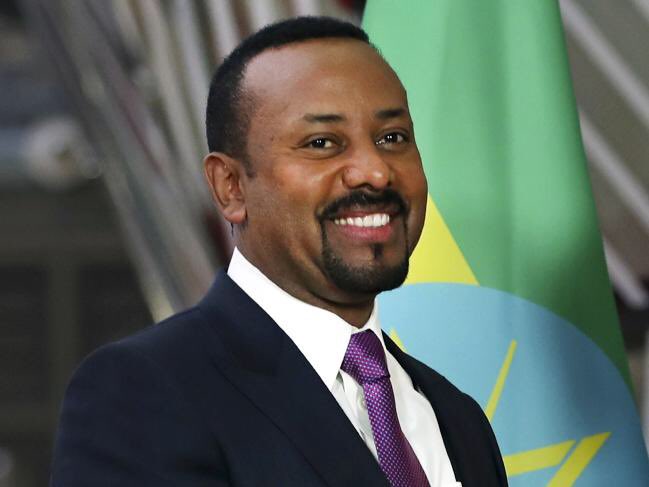 The head of the Norwegian Refugee Council, Jan Egeland, congratulated Mr Abiy but said he must now “make resolving ethnic tensions within Ethiopia a priority”.

“He must urgently ensure that his government addresses the ongoing ethnic tensions that threaten instability and further human rights abuses,” it added.

Bisrat Hadte, a 45-year-old businessman in Ethiopia’s capital Addis Ababa, told Reuters news agency that Mr Abiy also needed to “improve the economy and drive down the cost of living”.

What is his background?

Mr Abiy was born in Ethiopia in 1976 to a Muslim father and Christian mother.

He has several degrees, including a doctorate degree in peace and security issues and a master’s degree in transformational leadership.

As a teenager, he joined the armed struggle against the former Derg regime – a Communist military junta that ruled Ethiopia from 1974 to 1987.

He later served as a UN peacekeeper in Rwanda.

During the 1998-2000 border dispute with Eritrea, he led a spy team on a reconnaissance mission into areas held by the Eritrean Defence Forces.

He joined politics in 2010, becoming a member of the Oromo People’s Democratic Organization, before being elected as a member of parliament.

His time as an MP coincided with clashes between Muslims and Christians. He devised a lasting solution to the problem by setting up a “Religious Forum for Peace”.

Who are the previous Nobel Peace Prize winners?

Former US President Barack Obama won the Nobel Peace Prize in 2009, for “his extraordinary efforts to strengthen international diplomacy and co-operation between peoples”.

The recipient of each Nobel prize receives three things:

The prizes are presented at ceremonies on 10 December in Stockholm and Oslo.