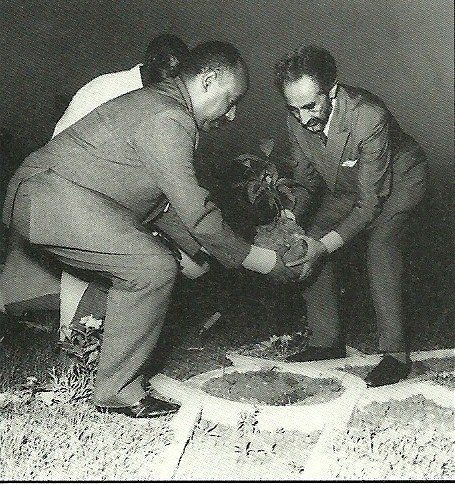 Since Ethiopia’s economy is predominantly agricultural, agriculture must play a large role in the plans which have been drawn up, at our command, for our empire’s development.

It is the duty of all to apply the skill of their minds to the factories, the trading centres and the roads and communications which are also evidence of Ethiopia’s prosperity, of Ethiopia’s strength.

During the past year (1958) the abrupt cessation of rainfall during the growing season caused considerable damage to Ethiopia’s crops. This experience has demonstrated that the rivers of our country should be devoted to irrigation, so that the food needs of our ever growing population will no longer be left at the mercy of the whims and caprices of the elements.

The fruits of the farmer’s labour must be enjoyed by him whose toil has produced the crop.

The uses of trees are many and varied. Groves of trees protect our fields and plantations from being desiccated by the desert winds which blow from neighbouring regions During the summer months, they provide moisture and shade. If trees are not presently planted to replace those being cut down from time to time, our constant efforts to conserve and develop the wealth of our country through the welfare of present and future generations will be rendered ineffective and futile.

We are greatly grieved to observe the many thousands of gashas of rich forest land being destroyed every year by reckless timber-cutting, thoughtless forest burning, unregulated forest grazing and other misuses of our forest wealth, due to popular ignorance and desire for temporary advantage on the part of our people.

The existence or non-existence of forest wealth in a country is one of the most important factors influencing its development and progress. The increasing pace of deforestation and the growing dearth of timber in Ethiopia, caused by unregulated tree-cutting and the failure to replace these by new plantings, give us occasion for anxiety that a severe economic problem will confront the coming generation. It is essential that steps be taken here and now to stop this wastage and check this destruction.

In these days when all nations of the world, in recognition of the tremendous importance of forest wealth, have launched intensive programmes for forest conservation and re-forestation, it behoves our county also to take the appropriate measures to solve this problem.

It is our wish and our desire that each and every citizen of our country follow the example we set on this Arbour Day in planting this tree, and himself plant as many trees as he can, for his own benefit as well as for the benefit of future generations.

Without agricultural expansion, industrial growth is impossible. Great strides, it is true, have been made in introducing industries into Ethiopia in recent years. But in any less-developed agrarian country possessing only limited possibilities for selling the products of its factories in world export markets, industry can grow only if there exists an increasingly prosperous rural consumer population. Industrialisation is not an alternative to the development of agriculture; rather, the development of agriculture is the essential pre-condition to the growth of industry.

Measures will shortly be proposed to Parliament for action to be taken to preserve, for the benefit of present and future generations, the nation’s forests which are not only valuable in themselves as a source of wood, but act as nature’s guardian against the forces of erosion, which, unchecked, can transform fertile areas into barren and sterile desert.