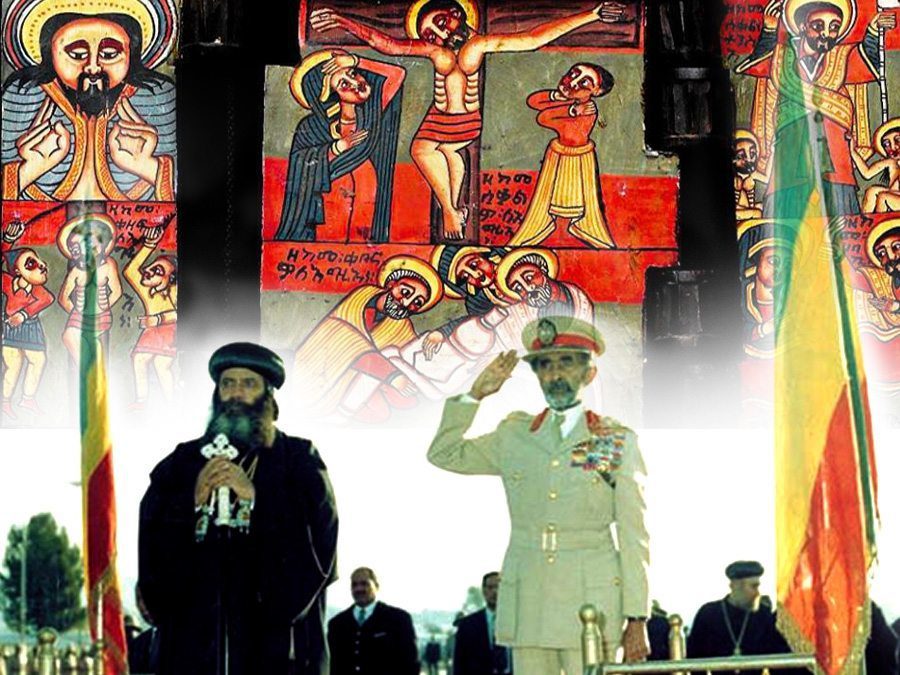 Here Oh Israel, The Lord Thy God is ONE GOD.

Emperor Haile Selassie Worships The One True God and Defends The Faith of Iyesus Christ, The Messiah. Evidence can be seen in Speeches, Media and Publications.  We acknowledge, honor and follow H.I.M. Belief and meditate on it daily.  Christ is ONE Incarnate Nature of God the Word. After the union it is impossible to speak of Messiah as being in two natures. By the union of the nature in the Incarnation the two natures became one nature, the natures being united without separation, without confusion, and without change. Neither of the two natures was assimilated by the other, the properties of the Divine Word were attributed to the flesh and those of the flesh to the Divine Word. The Logos revealed Himself in our flesh and became man like us. He did all things that man does with the exception of sin (John 8:46). And at the same time was truly God.  He is God-Man. He is co-equal and consubstantial with the Father in his Godhead. He is perfectly united with us the union being from two modes of life into one. The union of the Word with the flesh took place in the womb of the Virgin Mariam. St. John says: “The Word was made flesh…”.

The Ancient Tewahido Faith has been shrouded for centuries and is now revealed through the Life of Emperor Haile Selassie I.  The Birth of Ras Teferi Makonen and the Revealing of the Tewahedo Faith has led us to a Higher Revelation of Christ.

Ancient Rastafari People Represent The Ancient Ethiopian Face of Our Messiah, Iyesus Christ and worship through Ethiopia’s eyes. Ethiopia, Africa’s only unconquered nation, mentioned the most times than any other nation in the Bible, Mother of Civilization,  All Kindred & Tongues.   Ethiopia, Bread Basket of Africa,  The Bete Krystian/literal meaning, The House of Christian.   Egypt is her sister, Seba (Sheba), King David, Solomon’s Israel as well, A Holy Nation, set aside and isolated from the world until revealed today.   The Keeper of The Ark of The Covenant,  The Land Where Our God Loves To Be!  We were Created to Worship Igziab’ber, The Lord God of The Universe, One True & Living God, Loving, Benevolent & Merciful, Lover of Peace!

Ras Teferi Makonen, The Golden Child, is the birth name Given to H.I.M.  He was BAPTISED in The Ethiopian Orthodox TEWAHIDO FAITH, with Fragrant Frankincense, was SEALED & Anointed with Holy Oil, Received Ancient Prayers and Rites from the Priesthood of Melchesidek, TO DEFEND THE TRUE FAITH of IYESUS CHRIST, THE MESSIAH.   H.I.M. Became A Divine & Earthly Military Leader to DEFEND The Bete Krystian, literal meaning, The House of Christian.  These Ancient Peoples also Known as Ihud or from  The East as The Christines, Nazarenes, some Essenes, Brahams and more.

I heard another voice from heaven, saying,

“Come out of her, my people, so that you will not participate

Roman-Greco “Christian” teachings have infiltrated our Ancient, One True Melchizedek Order to cloud our judgment.  Using hostile forces and subliminal mind hypnosis, multimedia and entertainment a weapon and medium to spread their dark forces and propaganda. They promote a marred perception of the true identity of Christ for us to reject our own salvation.  The Vatican and the Media is the root of all the confusion and division among Us.  They create multimedia propaganda, profit from death and war. Hiding our ancient books of holy rituals and teachings, in vaults and underground cities, they study our ways and ancient order, foundation being, Judaeo-Christian principles. We fund their energy, buy their products, support services, invest in illusion and weak infrastructure. We conform by representing our faith, representing their confusing and mixed up Babylonian ways and culture.  Drunk on mis-information, senses inflamed with passion,  ones become unbalanced, spiritually and physically anemic, lacking TRUTH, THE WORD and Right Knowledge of The Discipleship of THE GREAT I-AM, Divine Law, Our FAITH & Culture.

Jews don’t burn Moses so why should “Rasta” burn Iyesus Christ, The Messiah?

Original Rastafari Peoples follow The Messiah, emit ONE Love, One Heart, One Word,  One Sound, One Power. Original Rastafari follow the Path of Truth, Justice and Righteousness.  RasTafari Peoples are Known as Healers, Mystics, Sages, Makers of Melodious Music, The Church of Reggae, sent to Calm The Soul and Uplift the Spirit.   Defenders and Judges of Judah, Carer of Mother Earth and The Global Community.  RasTafari is known to be the true defender of the biblical orders and faith through the examination of their ways and teaching. Why would such a culture take it into consideration to denounce The Lord of His Majesty?  We were created to LOVE, To Serve, To Worship, The Great I AM, Most High Creator.  Our Elders and Saints have come to tell the same.  A rebellious people shall perish and Out of Judah Rise The Lawgiver!  Out of Judah Has Come a New Shoot!  Atonement in necessary for Our Ascension.   Hear Oh Israel, The Lord Thy God is One.

Anything outside of what His Imperial Majesty and His Christ Proclaimed