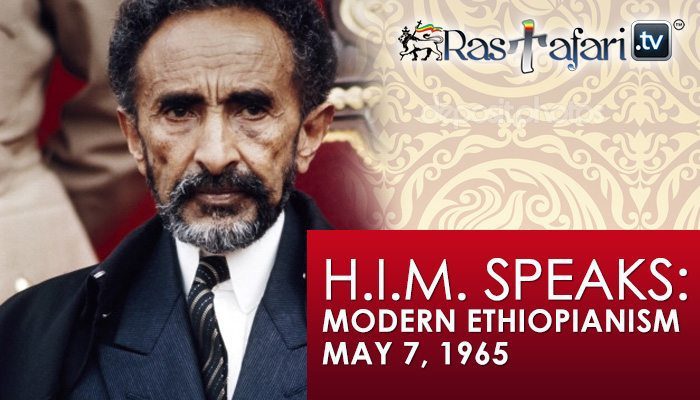 As the years wear by, man’s horizon grows wider and wider and the vistas multiply. So it is with Ethiopia. As the nation moves progressively in the accomplishments of the targets set for her political, social and cultural advance, We find Ourselves confronted with yet more tasks, more avenues of effort that demand Our attention. It is within this framework that, thankfully, the wheels of progress have moved and have brought Ethiopia thus far on the path We have chartered for Our country and people since we undertook the responsibility to move Ethiopia forward. The Ethiopian people, who have co-operated fully in implementation of all Our plans,deserve Our gratitude and appreciation.

The catalogue of achievements that you have reviewed on this twentyfourth anniversary of Ethiopia’s liberation is testimony above all to three factors :

Ethiopia is an ancient land and her civilisation is the result of the harmonious alchemy of the past and the present, upon which we confidently build for the future. This heritage is the bedrock of modern Ethiopia.

In it the people have chosen to distil from the past that which is useful and enduring, to adapt those worthwhile attributes of our present day world, and to fashion this modern ethiopianism – the foundation of our social order that has served so admirably the purpose of the nation’s steady advance.

Be it recognised that while the institutions which Ethiopians have inherited from their forefathers still proudly carry their ancient designation, the contents of these valued institutions have been adapted to meet the rising expectations of the present generation of Ethiopians.

Be it known to all who judge our institutions by the labels We have inherited from our past civilisation, that Ethiopian institutions, regardess of their nomenclature, are the fruits of Ethiopianism – this optimum combination that the people of Ethiopia themslves have fashioned to serve the fulfilment of their national destiny.

This anniversary of the liberation of our country came as a result of the aggression against Ethiopia, sequel to the then prevailing international conditions. Unfortunately, the breakdown of international law and morality that led to this episode has not been fully rectified and the lesson taught by that sad experience has not given rise to efforts commensurate with the imperious need for collective security, and a unified purpose to protect and guarantee world peace.

Through the struggle of her people, Ethiopia has survived and this survival has afforded her the opportunity to bring the weight of her experience to the efforts deployed by the international community in building a world of peace, progress and human understanding. We are gratified that Ethiopia has been able to play a significant role in this search for a better world, a search to which she is committed in her foreign and domestic policies.

When we look back to May 5, 1941, and contemplate the progress that Africa has made in the area of independence, it appears as if one is experiencing the fulfilment of a once farfetched dream. Today, there are thirty six voices that are raised in the defence of Africa and African causes ; in the 1940’s there were only three. Ethiopia has been gratified at the emergence of these new African states to the community of sovereign independent nations. She is always willing and ready to play her part through the organisation of African Unity in bringing about greater co-operation among the independent African states and to continue to do whatever lies in her power to aid in the struggle for the complete liberation of our continent.

We thank you for the kind words you have expressed and for the list of achievements you have reviewed. Those of us who need to know ourselves should read the message of St Paul in Corinthians, Chapter 4, verses one to six. Further details of duties and responsabilities of our officials will be announced in the near future.

May the Almighty help us to redouble our efforts on this 24th anniversary of Ethiopia’s liberation and to be ready to undertake great responsibilities to build a future for coming generations.